One of my favorite things about traveling is observing how people in different countries are the same, and how they are different.  Granted I’ve only really been to three cities in Russia, but here are some of the observations on the differences thus far.

Russians love their ice cream.  Despite the rain or cold or fog, we constantly pass people on the street eating ice cream.  You can’t walk more that a few feet without passing an ice cream vendor.  We tried it and it’s really good – even in the cold. 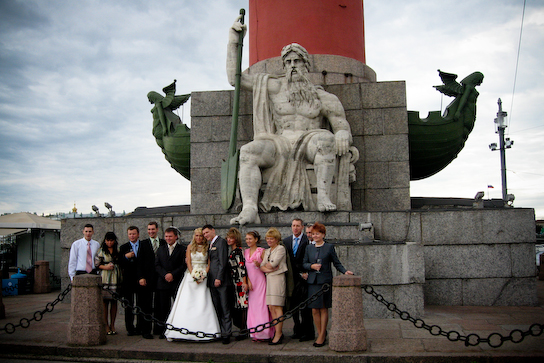 Going to the chapel and... oh, I mean that weird statue down by the river.

Shoes & legs.  The young women here really dress up.  I think I have mentioned that its cold – but you’ll still see most girls in skirts and high heals.  Apparently there is a shortage of men in Russia, so the women really play up their sexuality. I think it looks ridiculous and impractical.  Stuart thinks it’s awesome.

Mullets. The young women wear short skirts and high healed shoes and the young men have mullets – we definitely got the short end of that stick, ladies.

Religion.  The dominant religion here – at least in Moscow and St. Petersburg is Russian Orthodox.  Granted we have seen a lot of churches, so my view my be skewed, but I was surprised at how religious the Russian people are.  One thing in particular that I have noticed is how often people cross themselves while in a church.  I know that Catholics usually do this upon approaching the alter, but it seems that for the Russian Orthodox, there is occasion around every corner.  I thought it was a bit excessive when I saw a women cross herself in front of a model of  a church outside the Novodevichy Convent in Moscow, and then another cross herself in front of each of the dozens of icons on display at the Armory Museum.

That’s my impression so far and I’m eager to see what Russia is like outside the major tourist destinations.