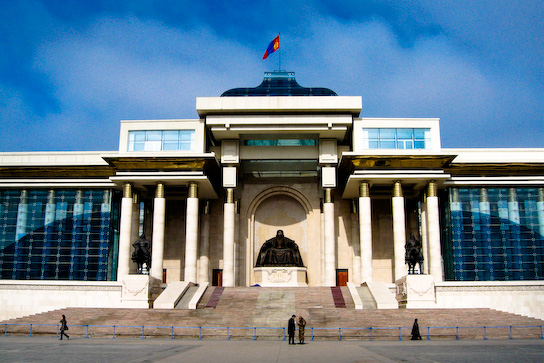 We spent most of the time in Ulaanbaatar (UB) seeing the National Museum of Mongilan History, the Museum of Natural History and the entertaining International Intellectual Museum. The Intellectual Museum was filled with thousands of puzzels of all kinds. You have to go on a tour so the guide can explain everything to you and show you how smart he is by solving all the puzzels after giving you about 30 seconds to try it. Some puzzels were so complicated there were prizes if you can solve them within a time limit. The hardest one takes 56,831 moves and you get like $100,000 if you can figure it out in an hour I think. We also visited the Gandan Khind monastery which is one of Mongolia’s main attractions. 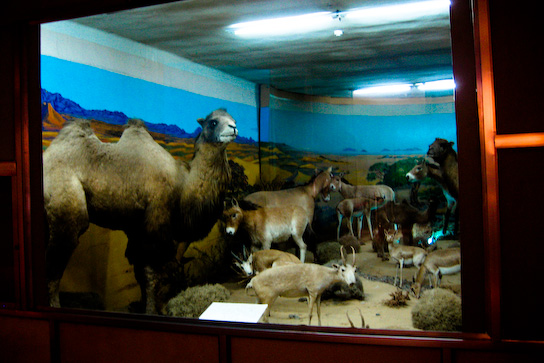 Since we missed the KGB museum in Moscow, I wanted to hit up the Museum of the General Intellegence Agency. I know the Mongolian spy world doesn’t sound like it actually exists, but that’s what made it interesting to me. The first time we tried, no one answered the door. People I talked to at the Agency said just said “no”. But after our trip to Terelj, we stopped by again and someone was there. He didn’t speak English, and nothing in the museum was in English, so it was a short visit. They did have a few machine guns that were cool. 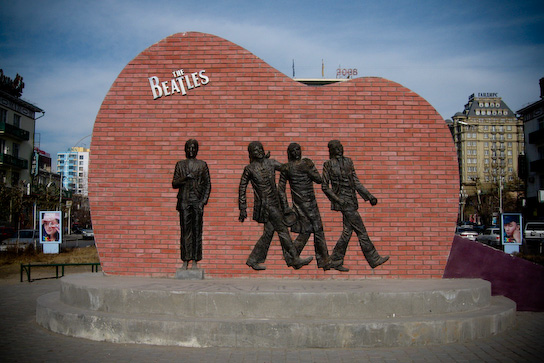 All you need is Mongolia.

There is a huge black market here that we went to a few times for trip supplies. This was the biggest market I’ve seen. And it was organized by products – there was a shoe section, an auto parts section, furniture, clothes, candy, housewares and even wooden crates with puppies in them. And jars jammed with live turtles swimming in yellow water. 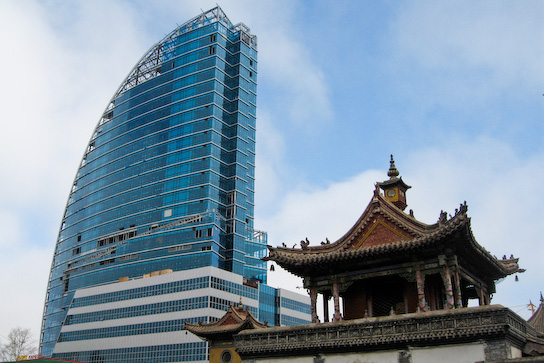 There were a few places where new buildings are being built right next to really old buildings. This seems to be symbolic of what is happening in UB and the rest of Asia as well.

We also looked for anything to eat that wasn’t Mongolian food. We found a great vegetarian place that we hit up for lunch – twice. We’re also going back to an Indian resturaunt tonight that was pretty good. Towards the end of our time in Russia, I discoverd the steamed dumplings with meat – usually mutton and pork – filled with meat juice. You eat them by biting them, sucking the juice out, then eating them. So good. In Mongolia they are called buuz. I got some here but they weren’t as good because there was no pork. And maybe after our Gobi trip, I’m muttoned out. 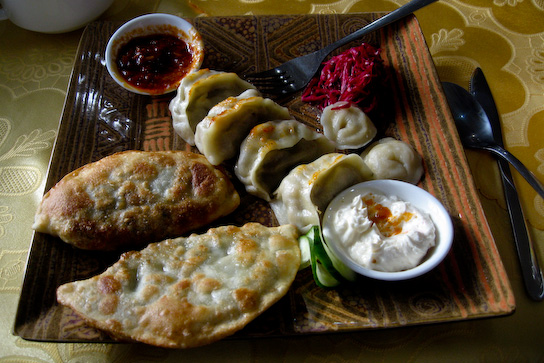 It’s not that UB isn’t a cool city, it’s ok. Part of it might be because the traffic is so bad it makes you not want to leave your hostel. Pedestrians do not get any rights here. I have seen old ladies in the middle of four lanes of traffic with cars going by her full speed and honking. She was just standing there shaking. One car hit Tina’s backside as we were crossing the road. It’s so bad they have police at big interections directing people to follow the lights. Like, the lights aren’t enough – they also need police to remind you that red means stop. 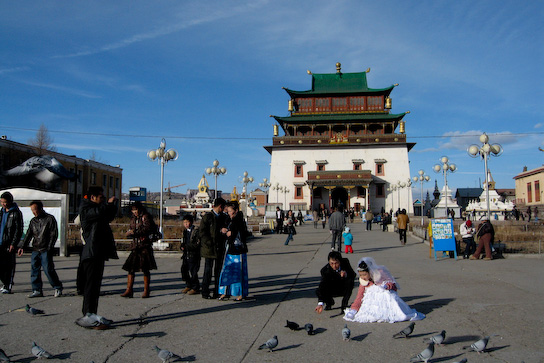 The Migjid Janraisig Sum temple at the Gandan Khind monastery. We saw several brides here – kinda like we saw at big tourist attractions in Russia. 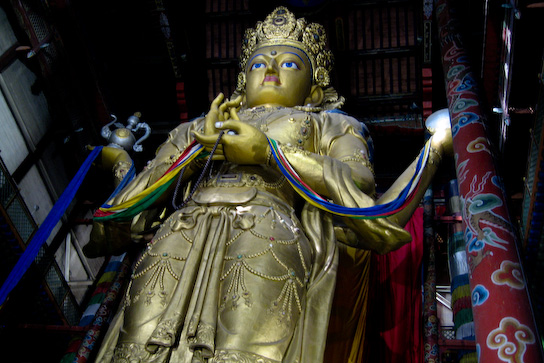 The temple had a 26m tall statue, made of copper with a gilt gold covering. Inside was 27 tons of medicinal herbs, 334 sutras, two million mantras and an entire ger’s furniture.