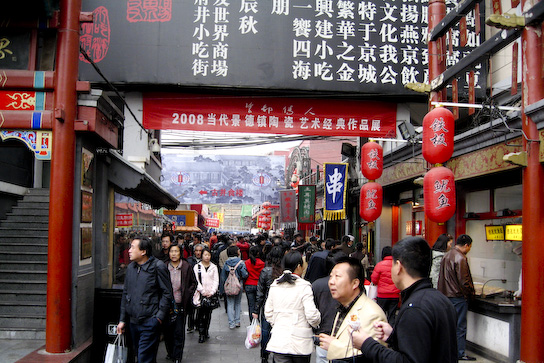 Since we only had a few days until Tina left, we decided to hit up the big “must-sees”. So, after spending the first evening exploring the hutong (little alleyways that are neighborhoods with shops and street vendors) we awoke to a gray hazy day. Not wanting to ruin the visual feast that is the Forbidden City, we changed our plans and walked over to the Wangfujing Dajie shopping area. It was a wide promenade with no cars and lots of antique and arts stores. We also found a good-sized bookstore with English titles. Our guidebook says it’s the biggest in Asia. I hope not because there wasn’t much I wanted to read. 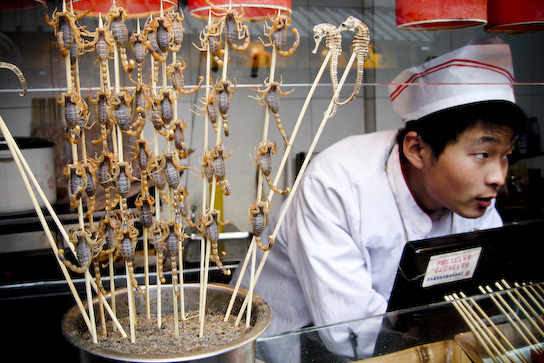 Just because it's on a stick doesn't mean it good.

The highlight was the Wangfujing Snack Street. In this little side street were stalls selling all kinds of awesome food. It was packed with locals who enjoyed it as much as the few tourists we saw. We had chicken on a stick, beef on a stick, corn on the cob, fried dough on some sugar – but the best things was fruit on a sick coated with a crunchy sugary glaze. We watched the vendors put some fruit on a stick – tangerines, cherries, pineapple, kiwi – and dunk it in a wok that was bubbling with sugar. It wasn’t too sweet so maybe it was cane sugar. Our favorite was the pineapple. 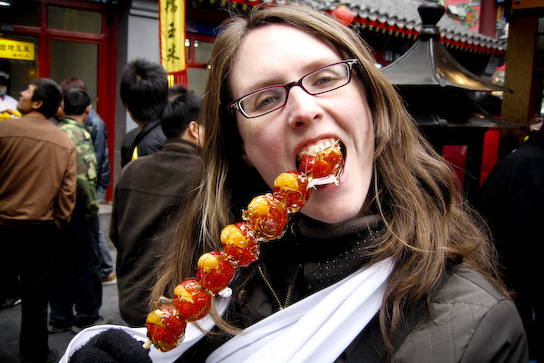 Ok, maybe it does.

As the stories have all told, there were scorpions (still alive) on a stick, crickets on a stick, sea horses on a stick and other weird bugs on sticks. When I would pass by one of the stalls, the men would grab a stick with bugs and suggest that eating it was good for my, umm, “manhood”… if you know what I mean. Clearly this was all for show as literally no one was eating them. And the locals found them really funny and gross. I’ve heard they offer these for uneducated tourists to eat – the tourists think they are a specialty. 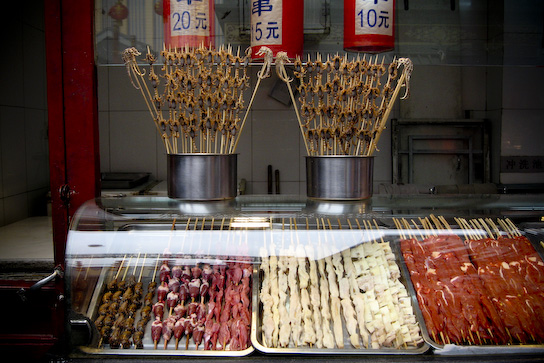 Too bad you can't have chicken AND beef on the same stick.

After the Snack Street we walked around more and headed to Silk Street, a multi-floored building with fake versions of things like clothes, dvds, sporting goods and antiques. And you get to haggle like crazy. As you walked down the aisles the workers, usually women, would come out and softly grab your arm and say things like, “Hello, sweetshirt?”, or “You are handsome, want backpack?” or run through their entire inventory in one sentence. Some were really funny about it – like they knew the circus aspect. I ended up getting a statue of a Terracotta Warrior for like 80% off, and Tina got over 50% off for a Burberry scarf knockoff. Tina was standing her groud by faking indecison – even I started question her altho we had just talked about how much she wanted one. The woman would grab my arm and say “Your lady is killing me!” and “You must joke about price!”. Finally Tina won out.

The next morning was sunny so we got up and checked out Tiananmen Square and Chariman Mao’s Memorial. Similar to Lenin, he has been keep in a permanent state of preservation for the public to view; the viewing is similar, too. You are rushed by and aren’t allowed to talk. He looks pretty good for a guy who’s been dead for over 30 years. 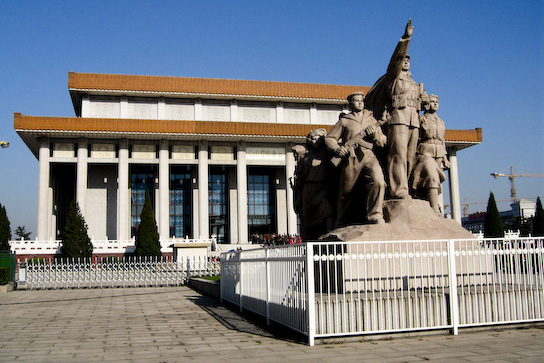 What I found most interesting was that the foyer, if you will, had a statue of Mao – upon which people would lay flowers and bow – sitting cross-legged on a big chair. He seemed really relaxed and approachable – a true “man of the people”. Now, thinking about Lenin’s Tomb, the contrast was amazing. Lenin is kept in a dark, cold vault. Mao’s room is much lighter and more spacious with draperies – kinda of like a living room with a really weird coffee table. 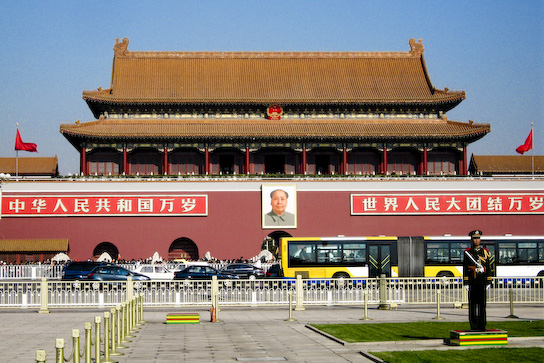 Gate of Heavenly Peace. Somehow all that traffic doesn't say "peace" to me.

Afterwords we walked around the Forbidden City. This place is endless. We must of walked for hours exploring all the alleyways and temples. It was also filled with people. We found it quite funny to see huge groups of Chinese tourists while in China. I guess I thought they would just walk around like regular people. 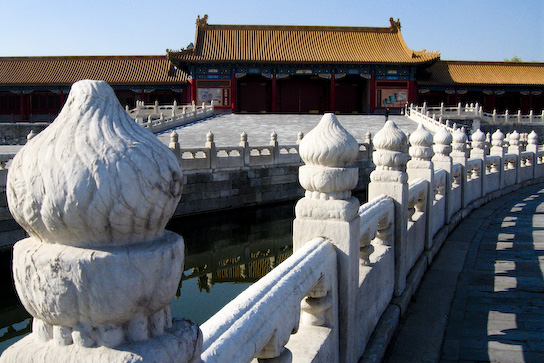 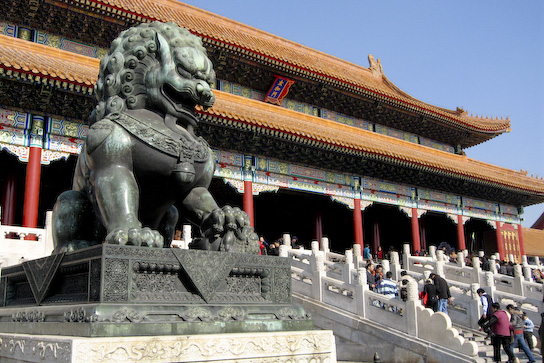 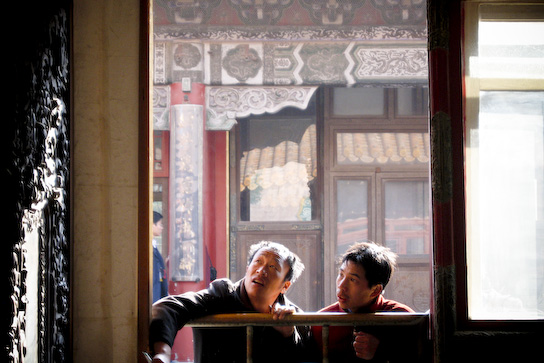 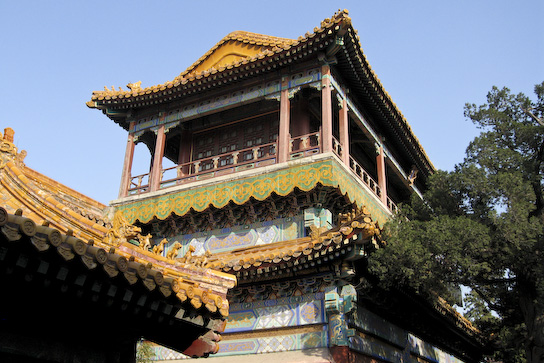 One of the many towers near the City walls. 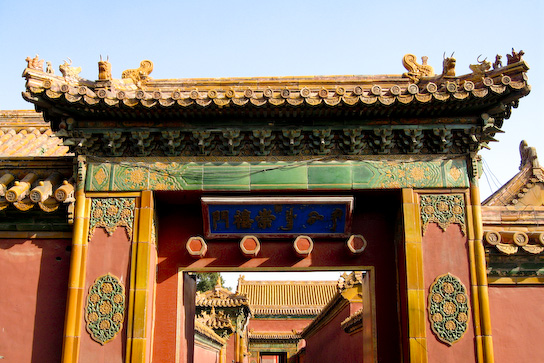 An archway between courtyards. 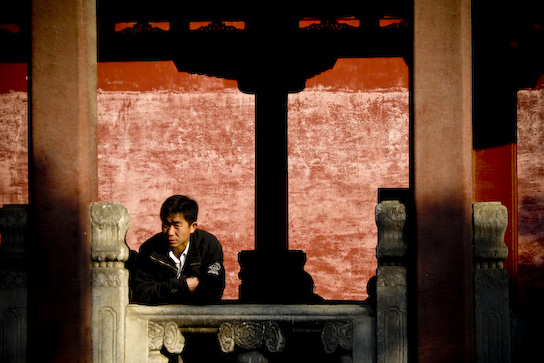 Relaxing in a pavilion in the Imperial Garden. 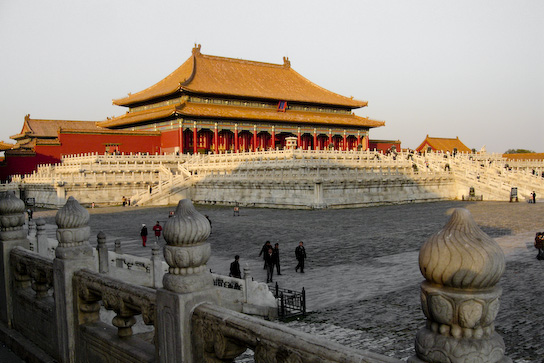 Then came the highlight of the day. We went to a Chinese acrobatics show. I don’t even know how to explain this. Imagine a poor man’s Cirque du Solei with high school production values. The acrobats were skilled but the props kept falling apart or the lighting would be off. This one “skit” had boys doing back handsprings or whatever across the stage and then through hoops. But when a hoop fell, there was suddenly a bunch of boys running across the stage to distract us – and they all had just one “jazz hand” leading them around until the prop was fixed.

And you know the face performers give the audience to say “hey, what I just did was impressive so clap”? The faces they made said “wow, I can’t believe there are only 20 people in the audience”. Sometimes just a person in the back would cough or maybe a few obligatory claps. It was classic. All I kept thinking was, how much did we pay for this? But Tina and I laughed the entire time so it was worth it. 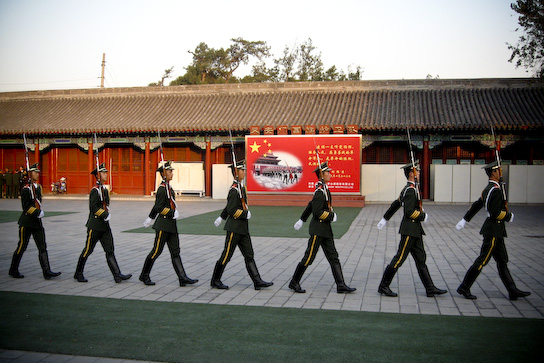 Changing of the Guard ceremony in front of a poster about the Guards.