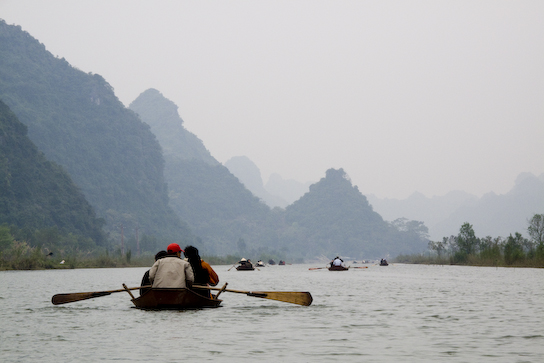 On the Perfume River.

On our way out of Hanoi, we passed the section of town with dog restaurants. Outside on the street, there were entire fried dog bodies stacked on tables waiting to be sold. The skin looked like roast chicken, but the body was unmistakably canine. Tina even saw a dog on hooks being skinned.

After leaving the city proper, we traveled a highway that cut right through huge fields of rice paddies with workers digging, hoeing, planting and whatever else people do in rice paddies. There were stretches of road with baguette sellers about every 50 feet frantically waving at the passing cars hoping they would get the munches (having spent considerable time occupied by the French, baguettes are about as common as rice). Not many people were stopping, but who would? Somehow baguettes with a sprinkling of highway filth doesn’t sound that appealing to me either. 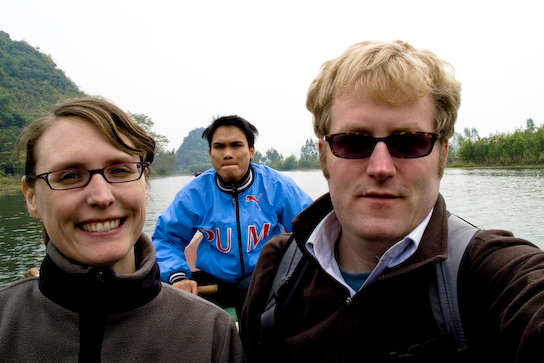 A while later we turned off the highway and started working our way through smaller villages towards the river. The bus disgorged us and we were told to wait as our guide got the boats worked out. I noticed a sign displaying the price and learned that had we done this ourselves, it would have cost way less then what we paid the tour company. But there were no buses coming down this way, so a tour might have been the only option anyway.

On top of our already inflated cost, it was suggested that we tip the rowers because they don’t make much money – guess the tour company keeps a good chunk of our money. We were also told not to tip until we get back to the van because some rowers, if tipped too early, will stop rowing and demand more money. 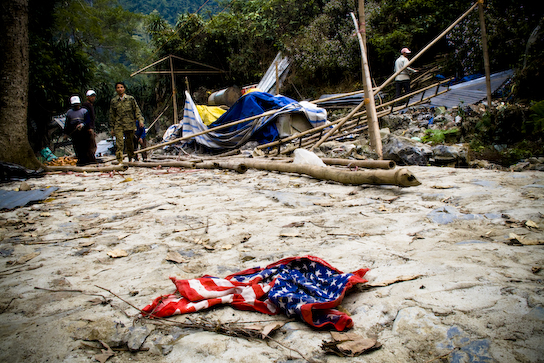 The workers ran over and picked up the flag when they saw me take this photo.

Each boat held four people not counting the rower. Tina and I got in and were joined  by two other people whom neither of us could understand. They were from South Africa. Even knowing that, we still couldn’t understand anything they said. But that was ok, because they were in front of us and facing forwards, making it awkward to hold a conversation anyway.

After an hour in the boat we landed at the base of the mountain the pagoda was on. We walked to a restaurant in the village and were told that we were running late and that we should take the cable car to the top. Well, the hike was part of the reason why we were doing this, so we said we’d hike fast. It was over 4km to the top, our guide warned us, and that if we didn’t make it in time, he wouldn’t wait to explain things. So the two of us, and another American couple – who were from Boston but had lived in Oakland – took off up the path while everyone else headed to the cable car. 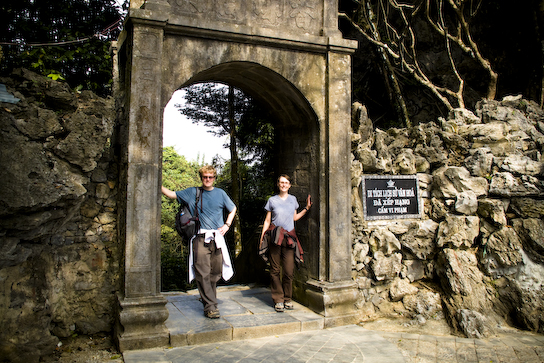 Entrance to the cave.

This was the fastest 4km hike ever. I don’t think it took longer then like 30 minutes. The path was lined with little stalls selling drinks and snacks, yet they were building more even though there were only about five people on the trail that day. There was even a monkey chained to a tree. Tina made a pretty accurate observation that in China and also Vietnam, supply of junk far outweighs demand for junk. There are lots of people selling stuff that nobody is buying (see photo of teddy bear store in Hanoi). 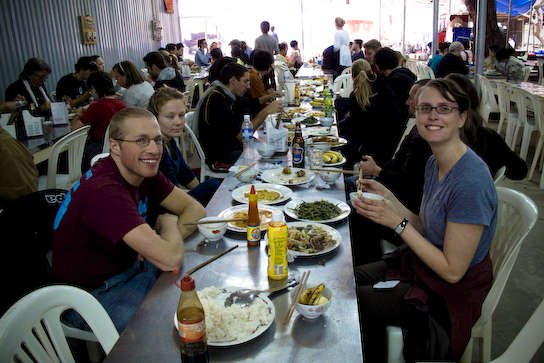 The pagoda was a little shrine in a cave at the top. Pretty boring. We arrived around the time most people were leaving, so we found the guide and he explained a few things then we hiked down, meeting everyone at the restaurant for a group lunch. The food was ok – good rice and spring rolls, but then this plate of white and dark meat came out that freaked people out. The white meat didn’t look like chicken or pork, an the dark meat didn’t look like beef, and it all smelled funny. There were also jars of snake wine for sale. The jars were filled with wine as well as actual dead snakes – some eating other snakes. Had I not known about snake wine, I would have thought it was some hillbillie’s dead snake collection – which actually would have be cooler.

That night we eagerly awaited Shirin’s arrival. We had arranged an airport pickup for her through the hotel, but when we checked in to make sure they had sent someone, they started asking if we needed to set something up for tomorrow night. After explaining that we had already made the arrangement, and that it was for tonight, they said someone was there waiting. Shirin arrived a few hours later and her excitement gave us a needed boost which lasted about 30 minutes until we fell asleep. 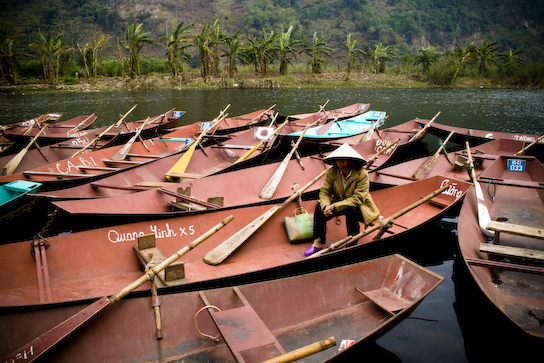 A rower waiting for her next customers.