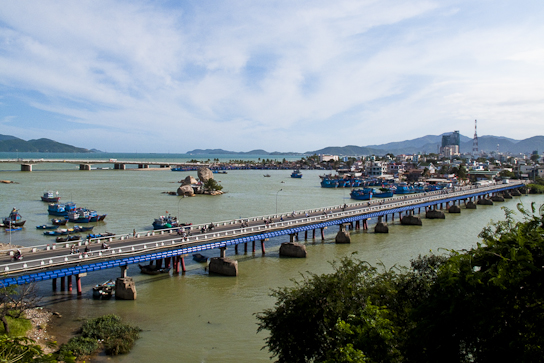 Riding east towards the coast from the highlands the terrain made some rapid changes. It went from the lush farmland to arid desert. The banana plants were replaced with shrubs of cactus, the green hills were muted and softened into orange rolling dunes. And it got hot. But that’s ok because we were going to spend the next few days on the water. The plan was to explore around Nha Trang and its islands, then head south to Mui Ne for some beachfront relaxation. 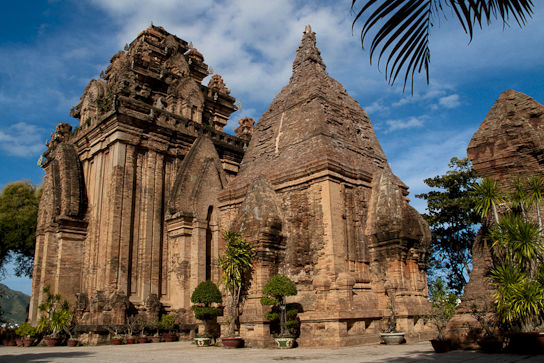 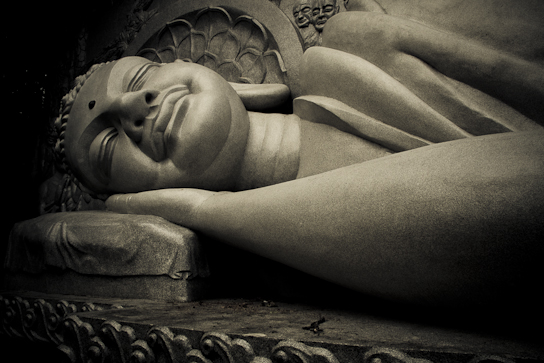 After spending the previous afternoon sightseeing around Nha Trang, the shuttle bus for our cheap island cruise picked us up after breakfast. Off the coast of Nha Trang there were several islands, most of which were not developed, save the larger – and closer – which had a recently constructed cable car connecting the island to the main land. 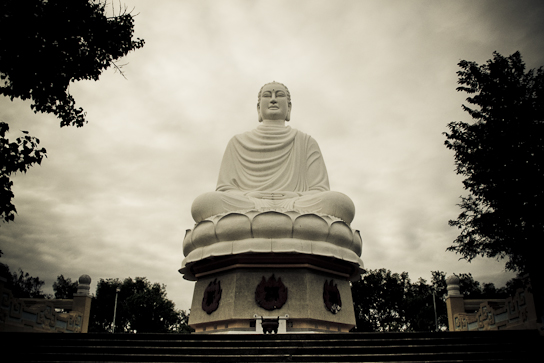 Our cruse promised five different islands – confirmed by the cartoonish map on the brochure.  While visiting the islands we were to enjoy snorkeling AND swimming, lunch, fruit snack, a floating bar as well as entertainment. Since it was only $7, they didn’t have to deliver much. 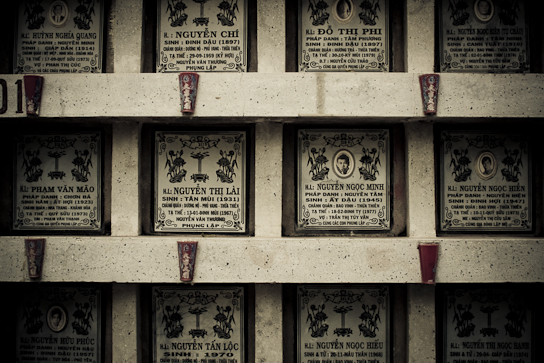 Mausoleum on the hill of Long Son Pagoda. 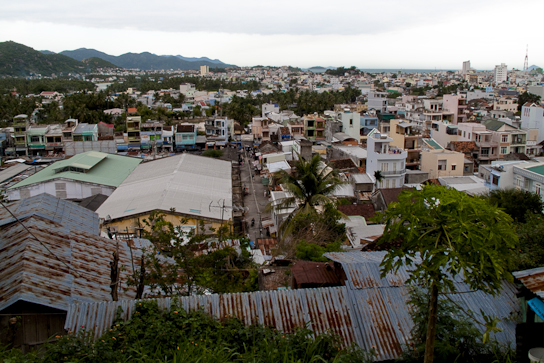 Looking out over Nha Trang.

The group in our boat was a good mix of westerners and locals – with the westerners  partaking of the activities and the locals just sitting around in the shade the whole day. It was pretty mellow until some dude named Alex, or Nate, or Chad, or something like that… we’ll stick to Alex… hopped aboard. He was from Germany, and was tall, barefoot and carried a guitar. The girls loved him. 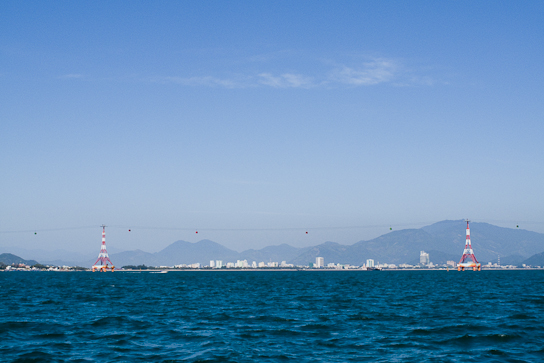 After the tour guide gave his introductory speech he asked if anyone wanted to preform karaoke (this was Vietnam after all). Some guys who knew Alex from the bars around town, encouraged him to play for us. So he reluctantly agreed and busted into a Jack Johnson song with Alex doing his best airy raspy voice. I have never wanted a boat to sink so badly in my life. 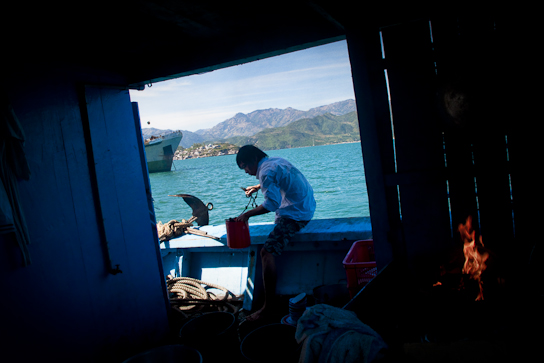 One of the crew getting lunch started.

The snorkeling was kinda weak (but the swimming was great!), with just a few interesting coral formations worth seeing. After searching for something more to see, I noticed that not only was I one of the few people actually snorkeling, but all the other guys were doing dives off the top of the boat to impress the girls. And to think all this time I thought treading water while spit-cleaning my mask and snot running down my nose was what girls were looking for. 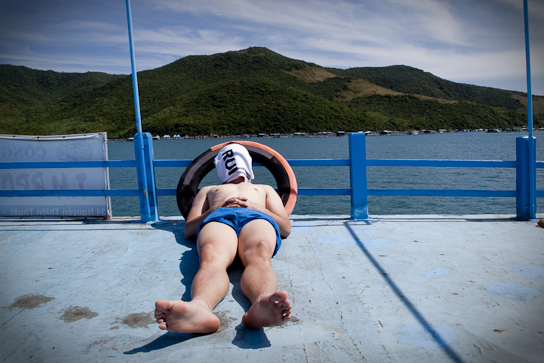 After we were done with snorkel time, the guide excitedly said we were now going to another island for lunch. We must have traveled for less then 20 minutes – literally to the next island over, which due to the short travel time I thought was still part of the first island – before stopping for lunch. Hey, $7. What can you expect? 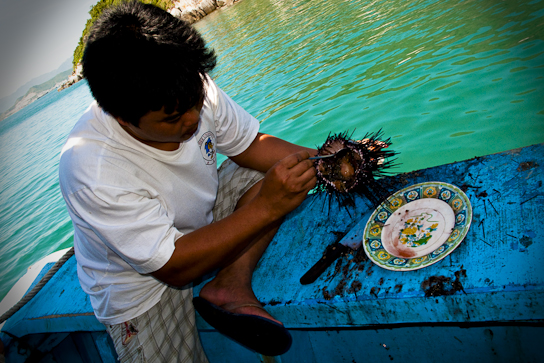 Our guide scooping out a sea urchin for lunch.

Lunch was pretty good. Most of the westerners were on the roof of the cabin getting some sun, so the crew brought up plates of noodles, rice, veggies, chicken, and then a few plates of fresh sea urchin. For the post-lunch entertainment, the crew turned into the house (or is it boat?) band and did a set of Vietnamese traditional tunes sprinkled with some classics like Hotel California and La Bamba. 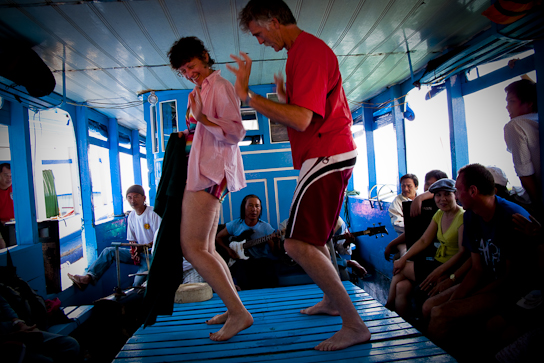 Then it was time for the floating bar – which was just a guy with a crate sitting on an inter-tube handing out plastic cups of free wine with pineapple. Don’t get too excited wine snobs, this wine was about $.25 a bottle. 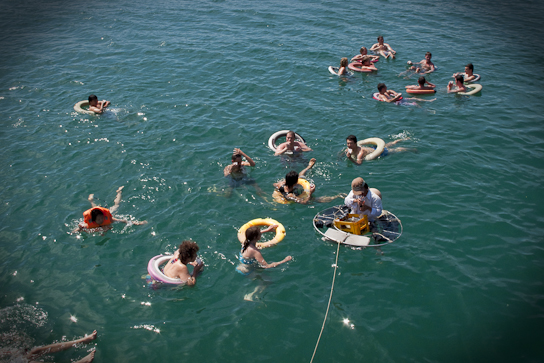 Floating Bar. Tina is in the middle.

After the bar closed, we headed over to another island which had a proper beach with bungalows, food, and jet skis. Tina and I lounged around in a bungalow until some guy showed up saying we had to pay to sit there. Tina got up and left, but when I asked him why we had to pay, he walked off. So I stayed. 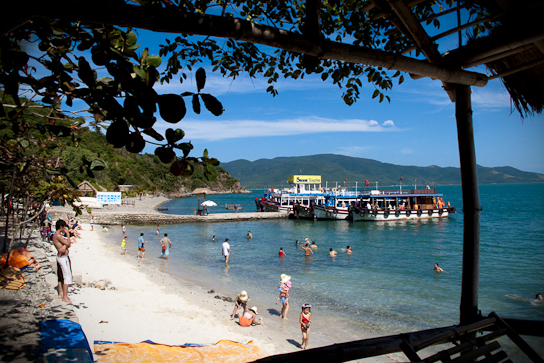 Relaxing on the final island.

I started talking with a Vietnamese couple who had offered me a sheet of rice paper made with coconut milk. It was pretty good until I realized that every bite tasted exactly like the last. The couple now lived in Hawaii and came back to Vietnam for vacation every couple years. The wife said she had changed enough so locals treated her differently  – like a tourist – even though she had grown up in Vietnam. And that it was weird to not fit in that well in the country in which she grew up. 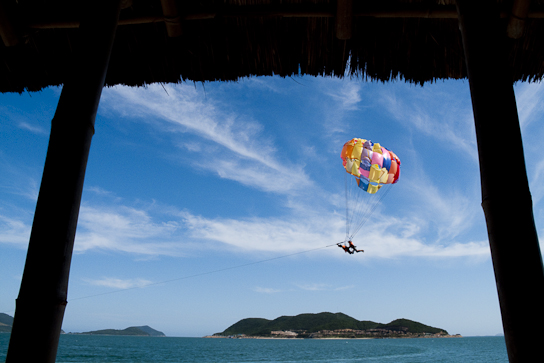 We should have been doing this!

The last stop on the tour was a lame little aquarium who’s fee was not included in the tour. Here the behavior of the westerners and the locals switched. We westerners stayed on the boat and took naps while the locals toured the museum. 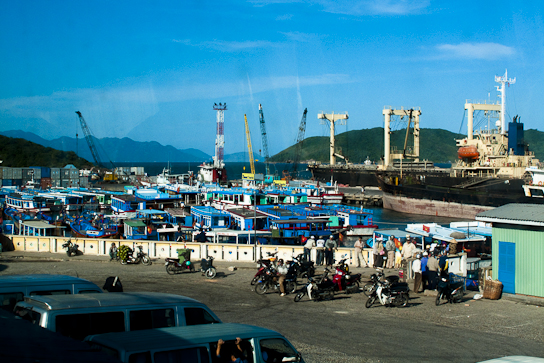 Back at the harbor in Nha Trang.

When the shuttle bus got us back to the hotel, we rented a motorbike and took off up the coastal road for a while, watching the sea darken as the sun set over the hills behind us. The coast and islands seemed to go on forever, giving us fresh views around every bend.

We got to Mui Ne around lunchtime and had to once again dance the hotel shuffle because most places were either full or charged too much for what they offered. Since this was the beach time we’d been looking forward to since Saint Petersburg froze over on us, we splurged and got a room where the only thing between us and the ocean was the swimming pool. 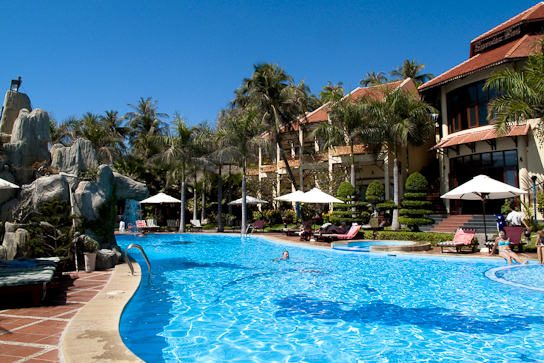 The pool outside our room. 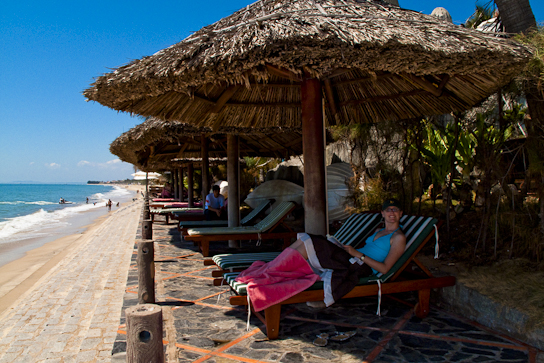 Tina relaxing by the beach.

Wanting to take advantage of this new-found luxury, we did laundry in the bathroom sink before hitting the pool, capping off the afternoon by taking a sunset walk along the beach getting a good swim in before it became too dark. Obviously we hopped back in the pool before going to dinner. 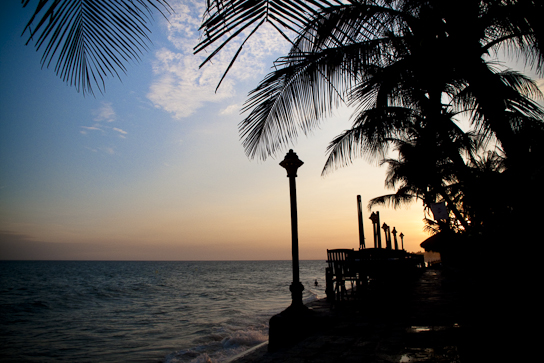 Sunset along the beach.

There were a couple Cham (a group of minority people) ruins and some sand dunes around Mui Ne that we planned on seeing. But since this was our vacation time, we decided to just enjoy our only full day here by relaxing at the resort before journeying on to the madness that would be Saigon. 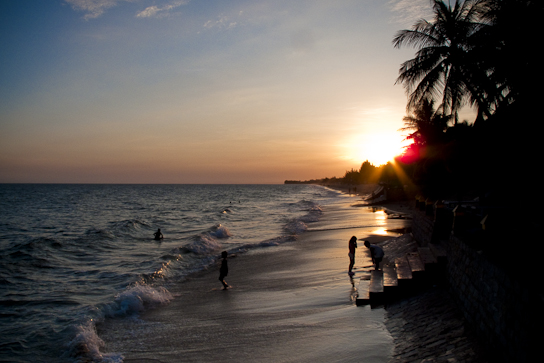 Man this was nice. 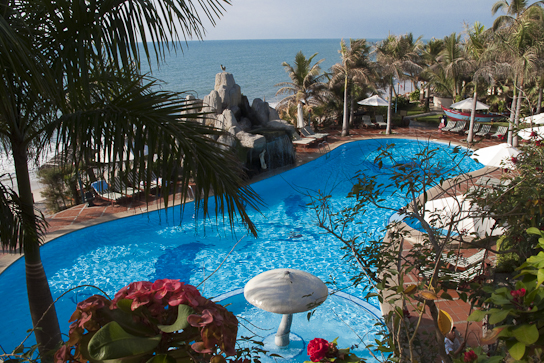 The pool from up on high.