We couldn’t have picked a worse time to travel the delta. Tet was in full swing, which really means everything shuts down and things get quiet. Buses aren’t busing, tours aren’t touring, and restaurants aren’t restauranting . On top of that, we decided to go independent style – whereas most tourists take tours when visiting the delta. The couple tour operators who were open, only offered a three-day trip for their max outing. We wanted to stay at least a week. 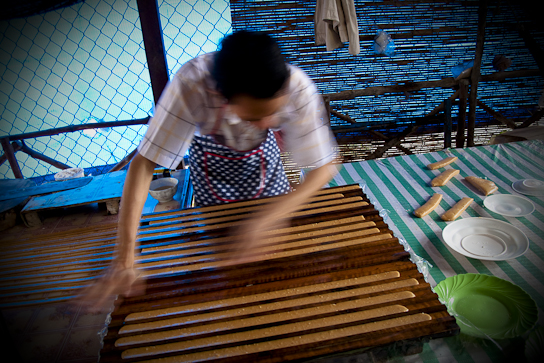 Since public buses weren’t running, we had to take a bus used by a tour group. The cheapest we could get was just a few bucks cheaper then the one-day tour. We decided to do a one-day tour to My Tho but not return to Saigon afterward with the rest of the group. 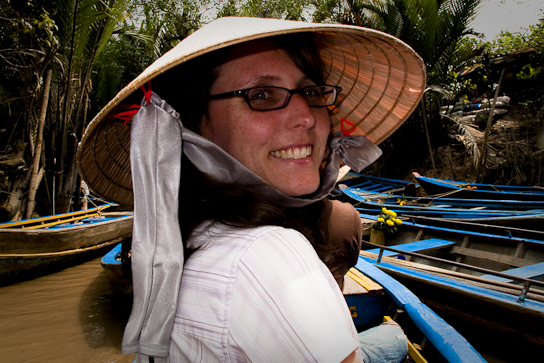 Those hats are incredibly comfy.

The tour was the usual: see a few sights which all seem to involve shopping. When we got to My Tho, we ditched the bus and took a small boat around the islands. The first stop was a tea place that put honey, lemon (really it was a lime) and sugar in green tea. It was pretty good. But while we were trying to enjoy the tea, the store employees would give us a sales pitch urging us to by some of the honey or other bee products. The same thing happened when we visited a coconut candy factory. By the way, I might start drinking green tea with honey at home.

After the tour was over and everyone got back on the bus to Saigon, Tina and I got our bags off and started looking for a ferry to Ben Tre – which should be right across the river. Turns out the ferries weren’t running either. So we had to take an expensive taxi ride to the town instead. It was so expensive because the only bridge was a few miles away, taking us way out of the way. Plus there is a Ben Tre province and a Ben Tre town. Pretty different. 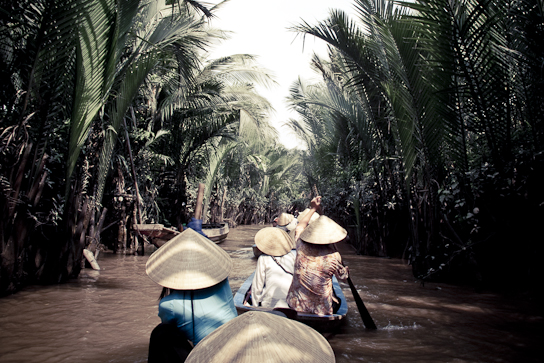 Being rowed down a little canal around Ben Tre province.

Our hotel in Ben Tre was rather odd. The door to our room was lightweight aluminum with a huge glass window for the top half. And there was constant karaoke going on – because of Tet. This place also had the fastest internet connection I have ever used. 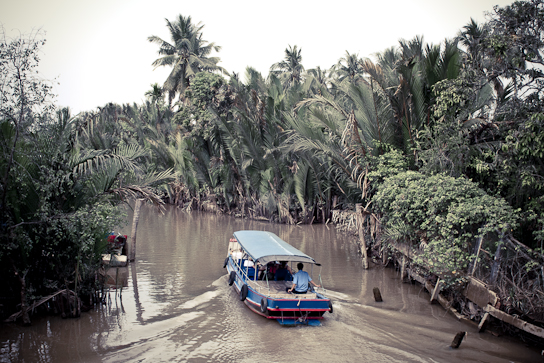 The rest of the evening was spent trying to find out how to get to Vinh Long, the next town we hoped to visit. After checking with a tourism office that had signs in English, but no English-speaking employees, we found a woman in a hotel with a travel desk who made a call and told us what time the bus left the next morning. 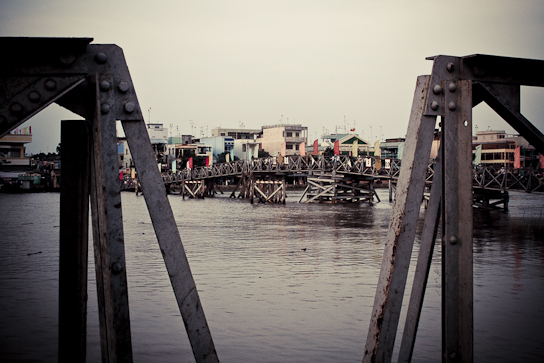 Looking back towards Ben Tre proper.

We then explored the town along the riverfront and even wandered through the little villages across the river. The paths through the villages were narrow and paved with cement, canopied by banana plants and coconut trees. Going deeper into the villages led us to a beautiful open-air temple. So far, this might have been the most friendly town we’ve been to. 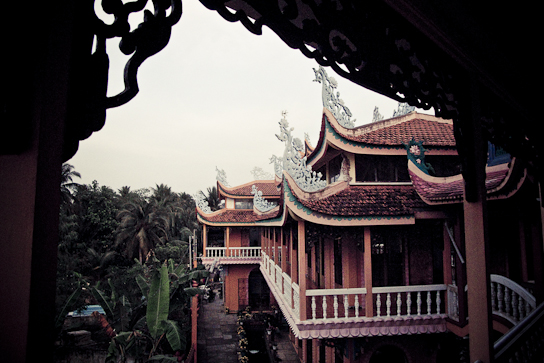 Because of Tet, all the restaurants were closed. As we were walking around starving, a woman on a motorbike pulled up and asked us if we were looking for somewhere to eat. We said we were and she pointed where we might be able to find a place. I guess we took a wrong turn because she and her daughter, on her own motorbike, pulled up and offered us rides. I asked how much, and she laughed and said “no charge”. They took us across town to a little street restaurant where we had some chicken soup that was good except for the bits of “chicken”.

Not surprisingly, when we got to the bus station the next morning, we discovered the time the woman had given us was wrong. The bus left an hour earlier. So we went back to the hotel where the woman working in reception that morning spoke English well, and I explained the situation. She told us to sit, made some calls, then said that a taxi would take us to a bus in My Tho that was going to Vinh Long. 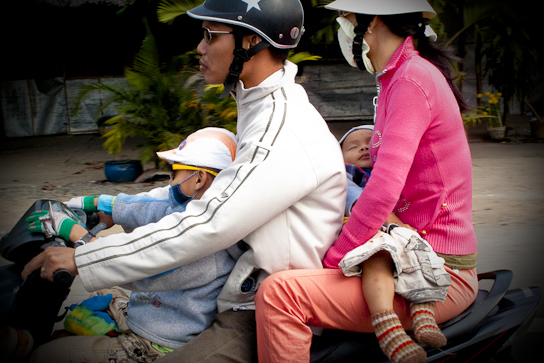 After another longer-then-hoped-for taxi ride, we got dumped at a roadside dive and told to wait for the bus here. About 10 minutes later the bus showed up. What a dump. It was a minibus with a million people in it. But somehow Tina and I scored the front seat. 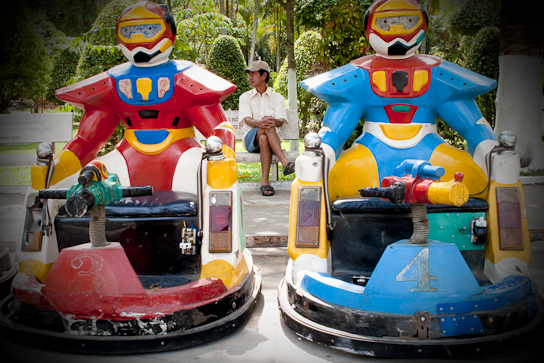 Since a bus driver in Vietnam can’t go 20 feet without honking, we were relieved when the driver honked and it sounded like someone stepping on a wheezing old man. One thing was disconcerting, tho: the driver kept a little vile of something on the dashboard and would take a few sniffs of it about every five minutes. Occasionally he would put a dab on his finger and wipe his temples and forehead. It smelled like really strong cologne. And was light blue in color. 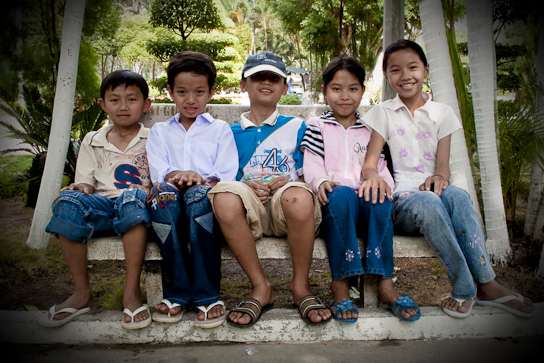 Really funny kinds who hung out with us and ate our candy in Vinh Long.

The minibus dropped us of a bit outside of Vinh Long, but since we knew where we were on the map, we decided to walk to the downtown area. We found the place where you can book a homestay out on a few close islands and were relieved to find it open. Because of Tet, most families weren’t taking stayers, but the place that did, charged more. Since that’s why we came to Vinh Long, we decided to pay the higher fare. 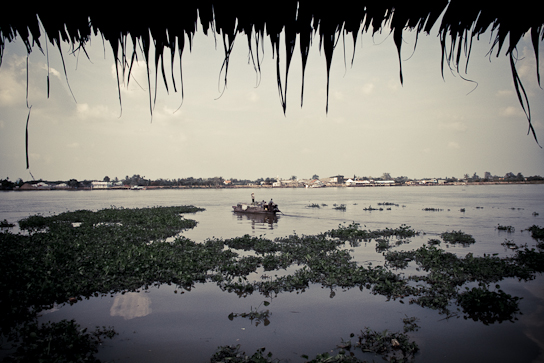 Waiting for the boat to the homestay.

Out boat wasn’t leaving for a few hours so we walked around town – spending most of our time talking with some local kids in a park – while waiting for our boat to the islands. We also relaxed at a riverside cafe where Tina discovered a love for ice coffee with milk. I drank coconut water from a coconut with a straw coming out that I’m sure was refilled with regular water. 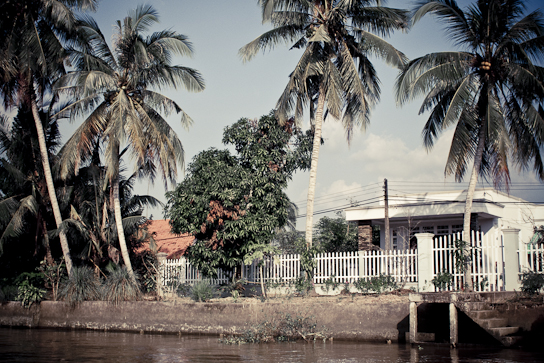 On the way to the homestay.

The homestay was more like a bed and breakfast-stay. The house was rather large with a few rooms with sheets for doors, mosquito nets over the beds, and not much else. But the food was awesome. After exploring the island, which was connected to smaller islands with little bridges, giving it a Venetian feel, we came back for dinner which was a spread unlike anything I’d had in a long time. 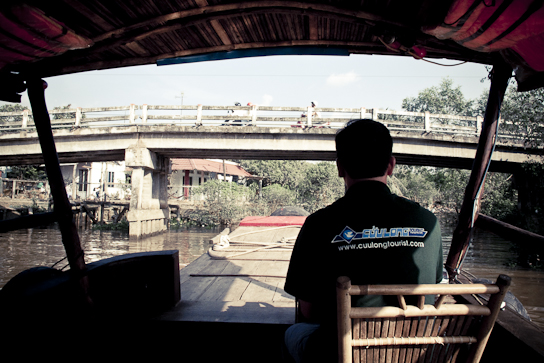 Our fearless captain. Watch out for that bridge!

The main course was Elephant Ear Fish (a Mekong Delta specialty) spring rolls which you made yourself by pulling the meat off the fish, putting it in rice paper with cucumber, lime juice, mint, and lettuce. There was also a pork dish, huge prawns, fried spring rolls and rice. I’m not sure if I have mentioned this yet, but the rice in Vietnam is incredible. Every time I have had it, it’s been my favorite part of the meal. Fresh, flavorful, and always cooked perfectly 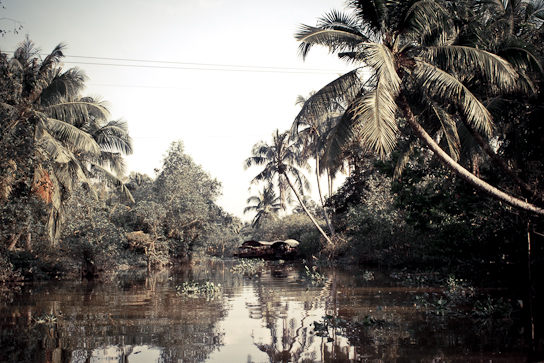 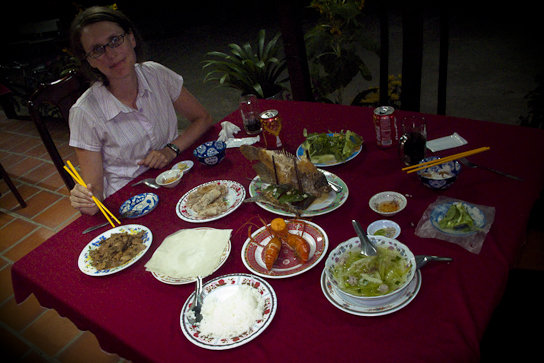 Dinner is served. Best fish I ever had (and I don't even like fish).