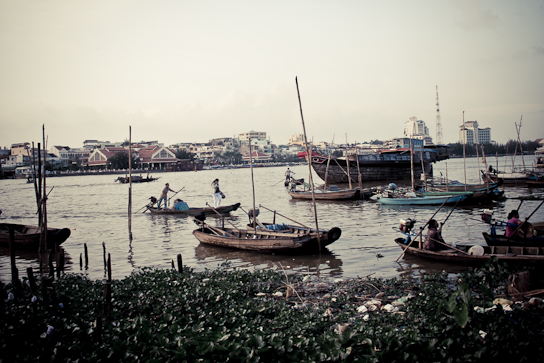 Looking across the river to Can Tho.

After taking the boat back to Vinh Long, we caught the bus to Can Tho. When we arrived at what should have been Can Tho, we weren’t too surprised to find out that it was someplace else. So I tried explaining to the bus driver that we were trying to get to to Can Tho and that’s what we paid for. He wasn’t helpful but eventually a women who spoke English came over and helped. She informed us that we needed to take a ferry across the river then a motorbike to the city. She then negotiated a fair price with two moto drivers and we set off. 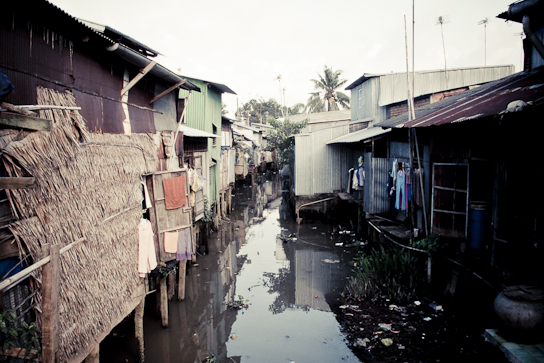 A canal between rows of houses in a village near Can Tho.

After checking into the hotel we walked around town looking for food. But since this was still around Tet, most places were closed except for a bar with bad music blaring. We had heard our hotel served good food so we ate there. The food was actually pretty good which explained why restaurant was always packed. I had beef with lime juice and peanuts, which was really good for something simple, and a great banana shake that was strong on the condensed milk. It was so good, I had this meal again the next day. 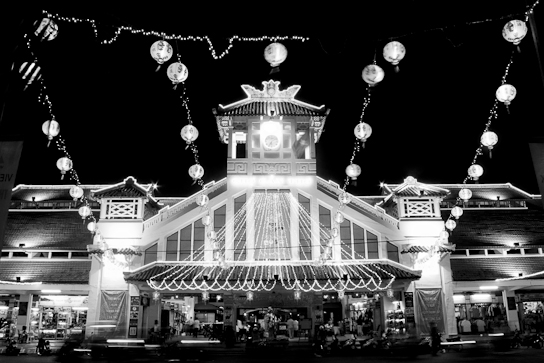 All lit up for Tet.

That afternoon we took a little boat across the river to the villages that were filled with equal parts nice people and trash. We wandered down the dirt paths that eventually opened up to some nice country side allowing us to take in the setting sun. Then we crossed back across the river and headed across a bridge to another island that was a popular hang out for the locals – the downtown is overrun by tourists – looking for some restaurants we heard were good. It was kind of a bust because none had English menus so we walked back and got some street pho then had some fruit shakes before bed.

We got up really early the next morning and walked down to the riverfront and hired a boat to take us to the famed floating markets – these are like regular markets but everything takes place on boats. But since this was turning out to be Tet Week, there wasn’t much going on. Feeling sorry for us, the driver took us on a great tour through canals around some islands. 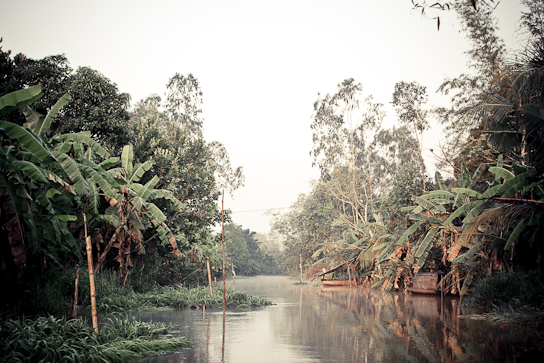 Meandering around the delta.

This was part of the delta we were looking for: quite little channels banked by banana plants, coconut trees, bordering on fields and rice paddies and little villages. People were out washing their clothes, making breakfast, even bathing. Our driver even carved a fresh pineapple for us one the way back. 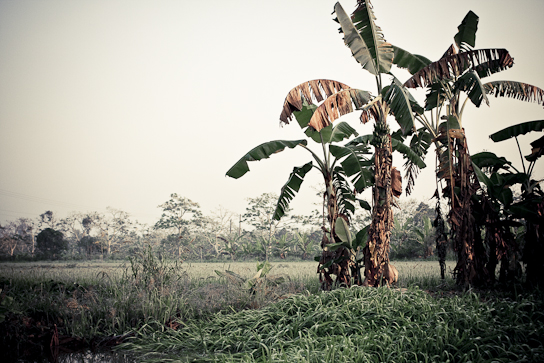 Banana trees next to a rice field.

When we got back to town, we had lunch and got ready for the bus to Rach Gia, a little town on the coast with ferries to Phu Quoc Island. When the shuttle for the bus showed up, the guy asked us for tickets. We had booked through the hotel and the only thing they had given us was a business card with something written on it. I protested and said we needed tickets, or a receipt. After being obtuse about it, they finally gave the driver some money – which he later used to buy our tickets – and they all started laughing at us. 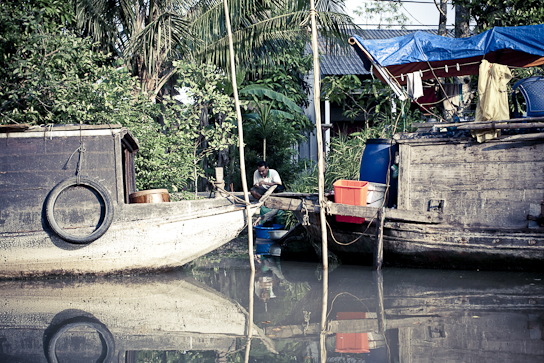 Rach Gia turned out to be a dump. And because of Tet Week, everything was full and the ferry to the island was booked for the next several days. Moral of the story: even though Tet is officially three days, it really lasts for over a week. We found one room at a dingy little place – maybe the worse room we’d had on the trip. I had to insist that they put clean sheets on the bed! And by “sheet” I mean a thin little blanket. They don’t use sheets around here. 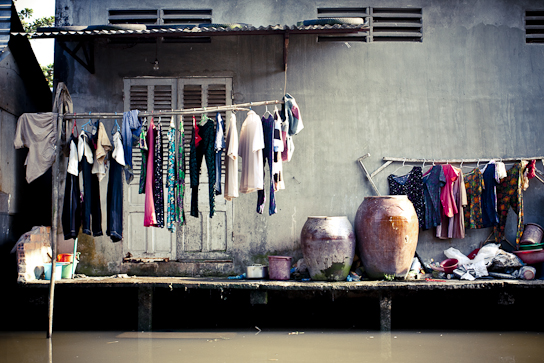 After learning the ferries were booked, we walked to the bus station to get a ticket the next day to get the heck outta this place. On the way we got lost, and stopped to  ask someone where we were on the map since it had few street names. Then one of these green buses that we have seen all over SE Asia drove by. We took them a few times in Vietnam and loved it, but since getting to the delta, we never could figure out how to book them. 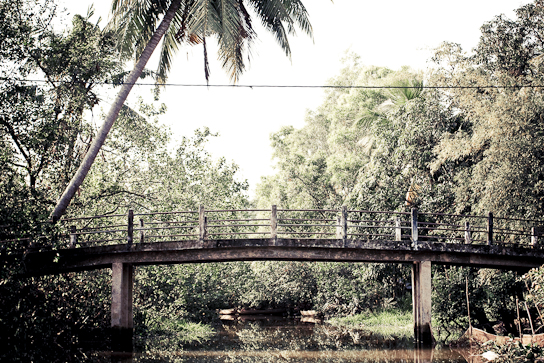 I hailed the bus and it pulled over. We found out there was a office in town at the bus station and that they did have a bus that went to Chau Doc, our next town which serves as a departing point for Cambodia. Awesome! We made our way to the bus station and found the office only to be told they actually didn’t have a bus that went there (we did see a few on the way). Not Awesome. But we found info about the local buses that left the next morning. 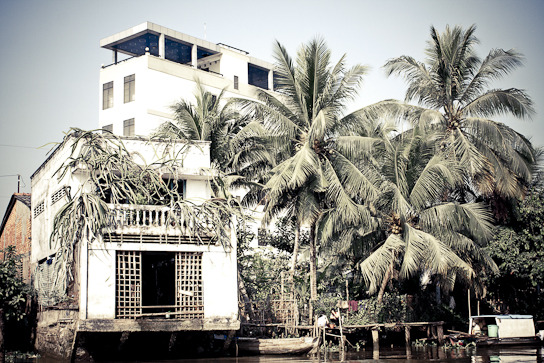 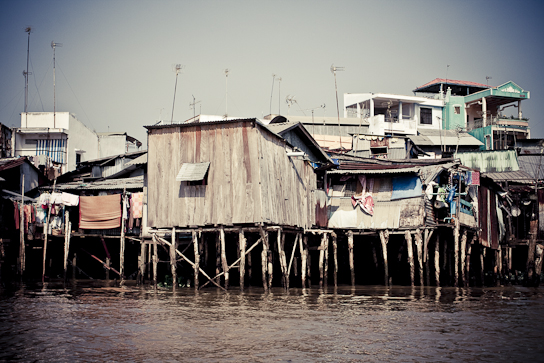 Most of the river is lines with stilt house which still flood each year.

On the way home we stopped at the only restaurant opened and ordered dinner. Apparently they had to get everything from the market because people started arriving on scooters carrying ingredients for our meal. Some guy showed up with chicken, another with pork. It must have been the dregs left over from the day because the food was pretty nasty.

The minibus to Chau Doc wasn’t too crowded and made for an easy ride. We had to take another moto from the bus station to the hotel and checked in. We hadn’t slept that well the previous night so we spent the morning relaxing. Then for dinner we tried to eat at the hotel but – because of Tet – they hadn’t been able to get much food the past few days so the menu was pretty limited. 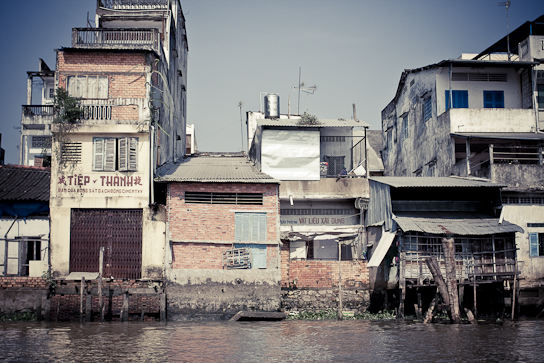 We also booked the boat ride from Chau Doc up the Mekong to Phnom Penh. Well, it was a boat ride which ended with a two hour bus ride. If we wanted to take the boat right to the city, we’d have to take the faster boat which was about three times as expensive. When we explained that we had overstayed our visa, the woman looked a bit concerned but said it should just be a small fine. 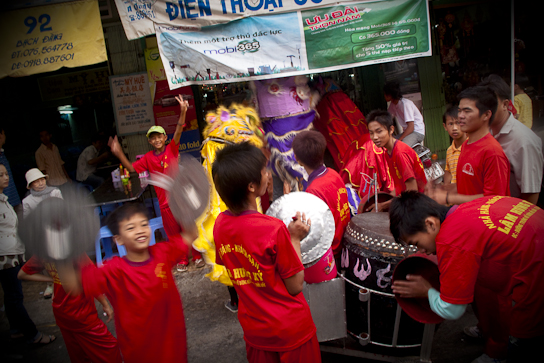 That night the hotel staff was up past 1am making all kinds of noise – yelling, laughing and what sounded like tossing pots and pans around. After finally falling asleep early in the morning, we were woken up a few hours later by this really loud drumming. The streets were filled with troupes of people in dragon costumes – and teams of drummers. Shop keepers or restaurants could pay and have the troupes perform outside on the sidewalk. 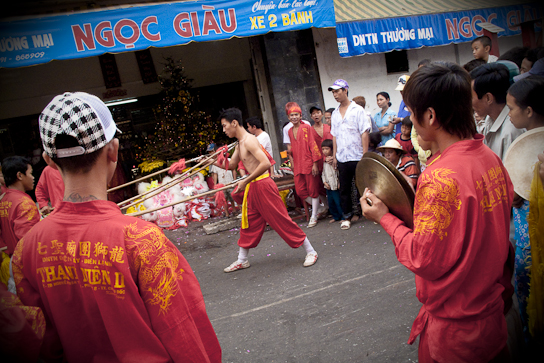 This guy did all kinds of physical stunts. Pretty impressive.

Before lunch we changed hotels to a place right across the street that was about the same price but three times as nice. It was so nice, once we checked in, we didn’t want to leave the hotel room! It was sunny, had a balcony, and when we turned on the tv, Friends was on. Now, I don’t usually watch Friends, but I’ve noticed while traveling, any American sitcom is a welcome piece of home. Kind of like Oreos I’ve discoverd. 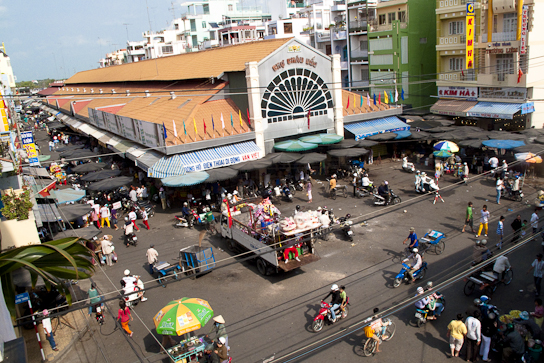 From our hotel window in Chau Doc.

Later we walked around the town stopping to have a fruit shake at a street stall with chairs out on the sidewalk where we watched the town’s activity. We explored the riverfront and scoped out the pool at a fancy hotel before coming back to the main square and having a delicious bowl of pho as our last dinner in Vietnam. Man that’s good stuff – all spicy and limey. Perfection.

After a good night’s sleep – and a free breakfast! – we took a cyclo to the boat we were to take to the border. Our first stop on the boat was a floating house that had a fish farm underneath. We also visited a minority village with signs in English warning not to by cakes from the children because they might be contaminated. That, however, did not stop the kids from eating them. The boat trip also gave us unique views of river life. We finally got to see kids leading their cows or water buffaloes to the river and bathing them. 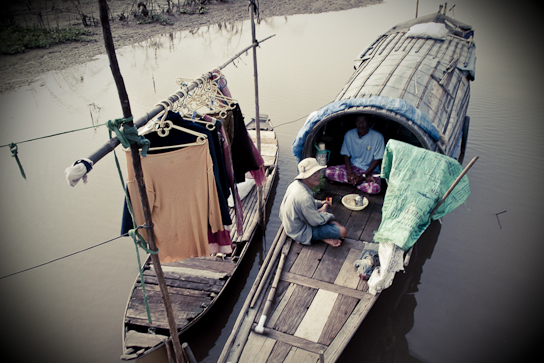 Breakfast along the river.

As we got close to the border, our guide, the woman with whom we booked the boat, collected our passports and customs papers and took a moto to the border station while we continued on by boat. About an hour later, the captain handed us his phone – it was the woman. She said there was a problem with Tina’s passport, that there weren’t enough pages. We assured here that there were at least two blank pages, plenty for the Cambodian visa. She said there would be a huge fine and that we should talk when we arrived at the border station. 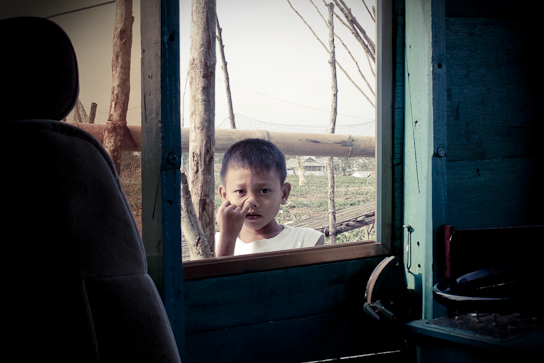 I hope he find what he's looking for.

When we arrived, she gave us Tina’s passport and Tina opened it right up to the two blank pages and handed it back to the women. She was stunned and started cursing about the customs agent who told her there would be a fine. We weren’t really sure why she didn’t check herself, but whatever. 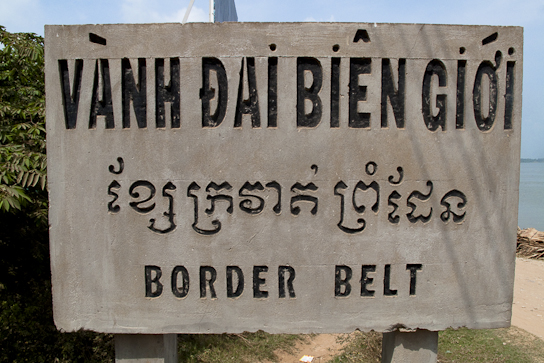 After lunch we walked across the no man’s land between Vietnam and Cambodia before hopping on another boat which took us to the Cambodian checkpoint. We then had to get off the boat to get our passport stamped. While in line to get my passport stamped I noticed that between the service windows there was a comments box – that was full of money. And it looked like a few people needed to pay the guards some hefty “comments” to get that stamp.

Rocking down the Mekong.