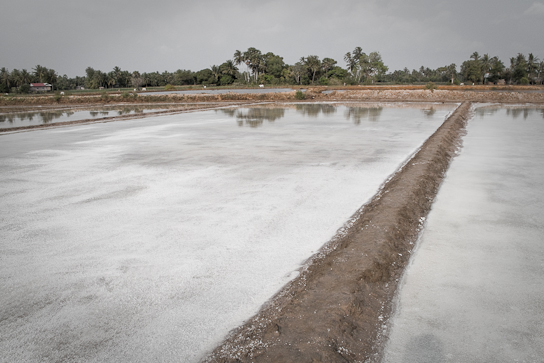 South Coast, Cambodia – We met Oscar not under ideal circumstances. For him at least. When we got our bus tickets to Kampot, we were told be to ready at eight in the morning. So we came downstairs, checked out and was summoned by the tuk-tuk driver to follow him to the tuk-tuk. Oscar had already claimed his spot. Deservedly so since he’d been sitting there for an hour waiting for us. He had been told to be ready at seven and had been waiting in the tuk-tuk for us ever since.

He didn’t say much on the way to the bus station. But when we got on the bus, he insisted that he get to sit where he wanted because he had missed the earlier bus. This caused a bit of a stir among the locals, but my attention was diverted to killing the swarm of mosquitoes on the bus – to great amusement by the women sitting behind me. 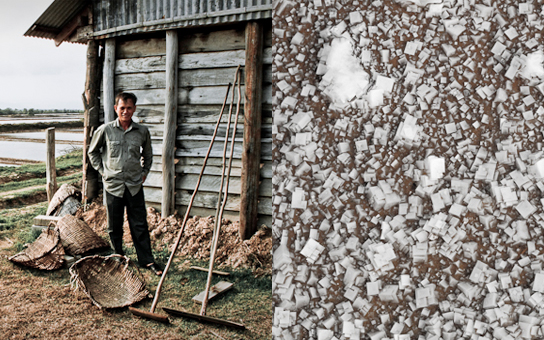 The owner; A drying salt bed.

Right as we were to leave, a woman rushed on board and took the open seat next to Oscar. Her name was Srey, and she was to sweep us up in her net of energy and generosity for the rest of the day. She introduced herself and asked our names and the usual travel information then we started talking about something more interesting: her life.

Her family had been slaughtered by the Khmer Rouge, and as a young child she had been forced to walk the long road to Kompong Cham along with hundreds of thousands of other Cambodians. The roads, she said, were lined with bodies – including children. She saw people dying, being killed. She was seven. 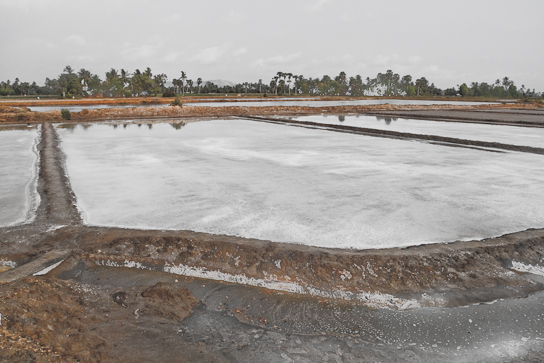 Fortunately, through family connections, she was able to escape to Thailand and is currently living in Australia. She found Christianity which had given her direction in life and what sounded like a sense of healing the wounds of her past which allowed her to return to Cambodia. She was all about forgiveness and love, and putting these ideals into actions. This had led her to start an orphanage in Cambodia’s eastern province of Mondulkiri.

Srey was on her way to Kampot to visit a family she’d help start a better life by buying them a tuk-tuk and giving them money for a house. She was also going to visit her friend’s father who owns a huge salt mining operation outside Kampot. She must have detected my enthusiasm, and invited us to visit with her. 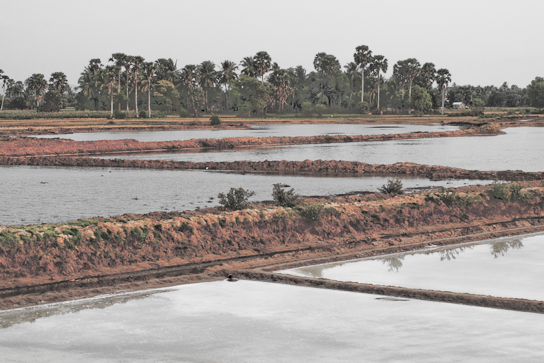 As the bus was rolling into the outskirts of Kampot, she said something to the driver and he pulled over. Srey got off the bus and asked if we were going to join her. Tina and I had no idea where we were or what was going on. But we got off anyway and followed her into a village next to the road.

This was where her friends lived and we were going to have lunch with them. But when we got there she found that the special noodles they had gotten for lunch wouldn’t be ready until later. The husband got his tuk-tuk and drove us around town looking for a hotel. Oscar found one he liked (he was kinda cheap) and Tina and I found a different one (actually had walls). 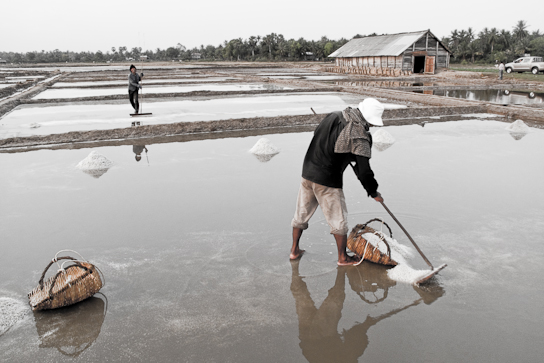 We all met back at Oscar’s hotel for lunch and then Srey’s friend showed up to take us to his salt fields. Remembering the conversation I had with the Vietnamese couple who now lived in Hawaii, I asked Srey what it was like to come back to Cambodia. She said it was hard sometimes because she is treated like a foreigner and even mentioned that the woman and the restaurant had tried to charge her tourist prices for lunch. And that she liked Australia because the people were nicer.

The salt mine was next to the river not far from the ocean. The owner took us on a quick tour explaining the process by which he makes salt. We could walk anywhere we wanted so we wandered around a bit until he called us back to the house where he and his wife cut down fresh coconuts for us to drink and then eat. Then his wife took us around to her crab farm but couldn’t find it. 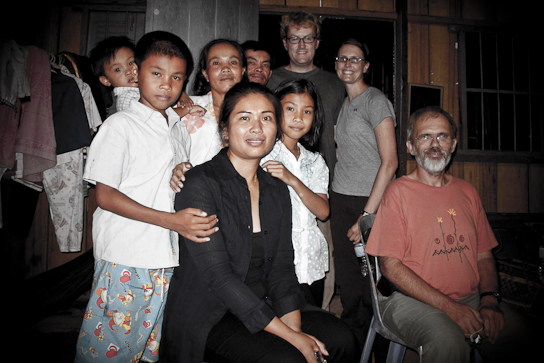 Srey, our host family, and Oscar.

The owner then drove us back to Srey’s friend’s house where the family sat around and watched us eat dinner: noodles, fish broth, morning glories, chilies and limes. It was pretty good but I ruined mine with too many morning glories so it tasted like I was eating a flower patch. The family didn’t mind, tho. They were so pleased to have us as the first westerners to visit their home.

I was pretty excited when I saw french toast on the menu for breakfast. I don’t think I’d had that in months. It was pretty good and served with honey. So after a taking our sweet time for breakfast, we decided to wander around town and see what’s doing. 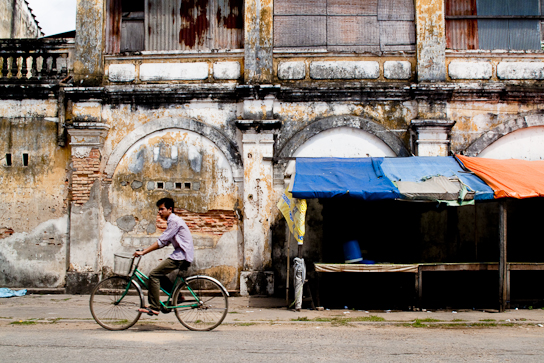 Kampot is a lazy town. It feels very much like a small beach town, but it’s on a marshy bay. There isn’t much to do, but it’s so relaxed you don’t really mind. People are friendly, there was good food, some book stores and a very ‘open’ feel. Everyone sits outside to eat, people hang out down by the bay and in the evenings people get together to watch the big volleyball game across from the police checkpoint where the officers lay in hammocks and watch tv.

One of the things we came to Kampot for was to see Bokor Hill Station – an old hotel the French built on top of a hill by the coast. But during the wars, it was abandoned except for an occasional stay by the Vietnamese army. The hotel can be explored freely – there are no gates, rules, off-limits areas. You can go anywhere. And usually it’s shrouded in mist, giving it a haunted vibe. 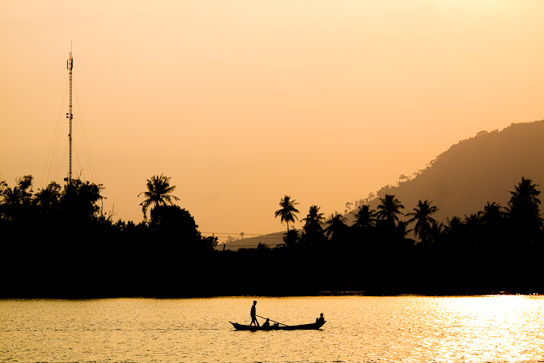 Sunset on the Prek Kampong Bay.

This is all about to change, however. Last year a foreign investor bought the hotel, closed off the road and began repaving it ,hoping to turn the hotel into a huge tourist attraction. This will mean crowds, rules and tour buses driving into Kampot replacing the relaxed, authentic feel that makes Kampot so refreshing.

Since we couldn’t visit the hotel, we thought about hiring a tuk-tuk to take us to Kep, an even smaller beach town, for the afternoon. But we were so relaxed, the thought of even sitting while someone else drove, seemed like too much work. So we sat by the bay until the sun disappeared talking with all the school kids who came over to practice their English. Then had a delicious dinner at Rikitikitavi – Tina had Kampot Pepper chicken, I had a lime beef wrap – before retiring from the exhausting day of relaxing.

We had bus tickets to the beach town of Sihanoukville (“Sea-a-nook-ville”) but were told the bus broke down and we would have to wait until the afternoon bus. But, not to worry, for there is always the more expensive way to do things. Since we didn’t want to have to look for hotels in the dark in a town that has moments of violence towards tourists, we opted for the share taxi which ended up being on a few more dollars. 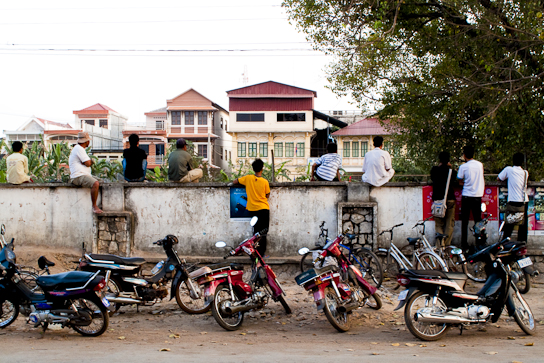 Locals watching a volleyball game over the fence.

The taxi – an early 90’s Toyota Camry – drove around town for a bit looking for more passengers. We found a guy who was transporting a few baskets of fish. Now, why someone would transport fish to a beach town is beyond me. He opened the trunk and put a tarp over my bad and then stuffed in his baskets which then filled the car with fish stink. Once we got moving the smell wasn’t so bad. It even covered up the exhaust that was blowing back into the car.

We dropped the fish guy off near the port by Sihnokville then made our way to the main area by the beach. Our plan was to stay in little bungalows in Bamboo Island but when I asked around about them, I was told that the military had done a huge land grab and now the island wasn’t worth going to. 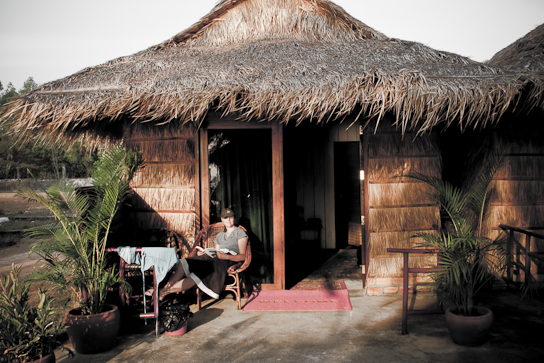 Tina relaxing outside our bungalow in Otres Beach.

I looked down the beach and it was literally lined with chairs, people and trash. This place wasn’t worth going to either, I thought. We he hired a tuk-tuk to Otres beach, which was a couple miles away and was more secluded and mellow with lots of beach free of stuff.

We found a place with bungalows right on the beach that was a bit overpriced, but we liked it anyway. Not surprisingly, we didn’t do much but swim, read, and eat. Like in Kampot, we couldn’t even be bothered to get a tuk-tuk into Sihanoukville proper for someplace fancy for dinner – plus it would have cost like $6 each way. 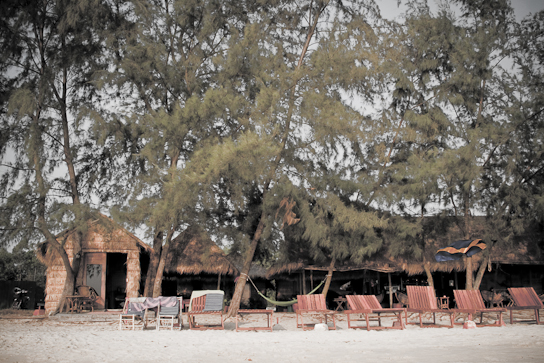 The bungalows as seen from the beach.

It was next to a casual open-air restaurant that ended up having pretty good food for really cheap. They even had french toast made with baguettes. And real Log Cabin syrup! One of the employees was a man from England who was married to a Cambodia woman who also worked at the restaurant. We had a good talk one night sharing travel stories and hearing about his time in Cambodia and his strong disdain for Thai people.

We ate at a few other places nearby, a Mexican place called Cantina that would have been better had the cook heard of salt. And on the opposite stretch of beach from the bungalow, was a hippy place were we had peanut butter and honey on baguettes and a huge plate of weird tasting nachos run by a lady from Virginia. 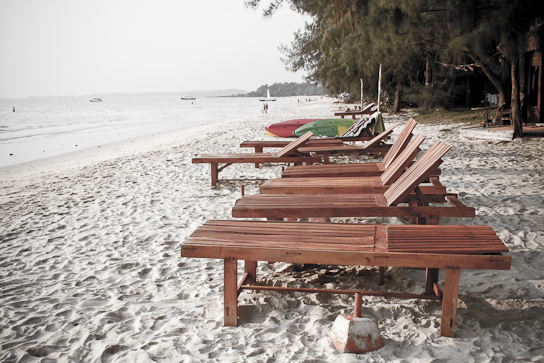 Where we spent most of our time. 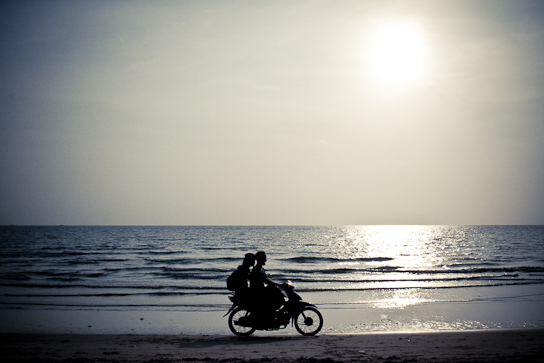 Sunset over the Gulf of Thailand.