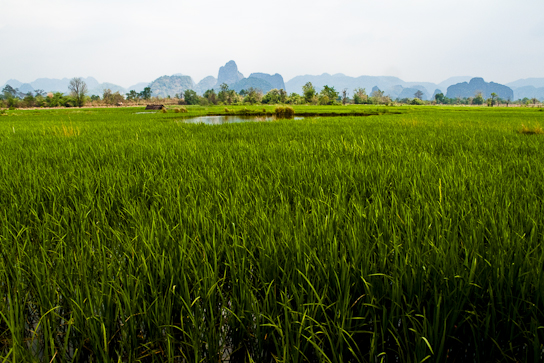 Central Laos – The Lonely Planet described it as a great adventure with rough roads and breaking bikes and a fellow traveler  we met told us stories about learning how to say “boiled eggs without fetus” in Lao so that he could find something to eat.  It sounded wild, slightly dangerous and a whole lot of fun, it was “The Loop” and we were all for it.   We arrived at Tha Khaek in the afternoon and checked into the Tha Khaek Travel Lodge, the base for all travelers setting out on The Loop.  We rented our bike and reviewed the hotel’s guest books with helpful hints about doing The Loop and prepared to set out the next day. 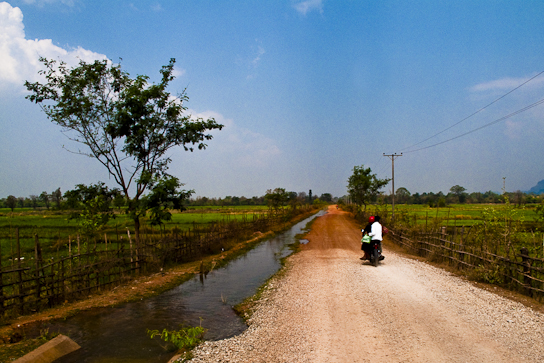 The road to Tham Pha Pa.

Our first stop was Tham Pha Pa (Buddha cave), a small cave 15 meters up a shear cliff filled with over two hundred 600 year old Buddhas, which could have been really cool if the locals had left it as it was when it was discovered in 2004 by a local fisherman chasing some bats for dinner, but they have poured a can a Velvita over it in the way of tacky flowers and what not.  Oh well.  I had to put on a Lao skirt in order to enter the cave, so that was kind of cool. 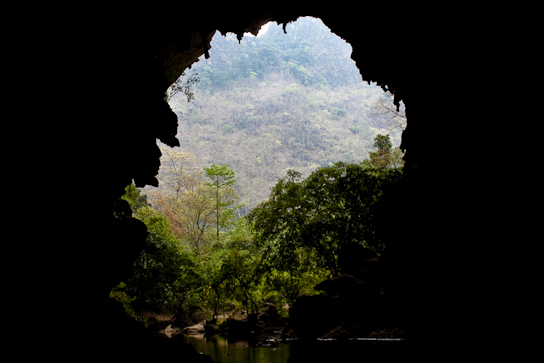 The view from inside Tham Xieng Liap.

The next stop was, oh joy, another cave.  Tham Xieng Liap is a 200 meter long cave with a picturesque valley on the other side.  We hired a local boy to show us the way through the cave to the valley.  Help us he did not, but he did follow us through, pointing here and there if Stuart really pushed him to show us the way. 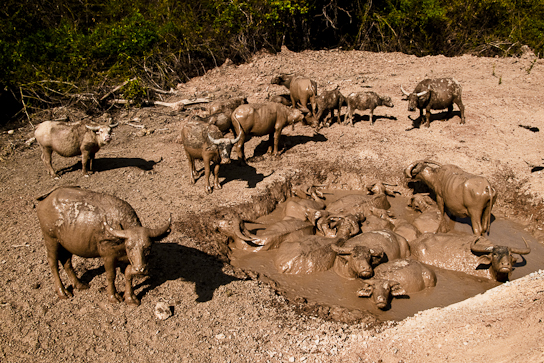 Navigating the dark cave was pretty difficult as we had to do a fair amount of clambering over slick rocks.  My balance and sight not being in top form, I had a pretty difficult time and shed more than tear.  Stuart had to do quite a bit of rallying to get me through.  And, we never did make it to the valley, our ‘guide’ didn’t seem interested at all in helping us reach it, so we got a peak of it from inside the cave, and turned around to go back. 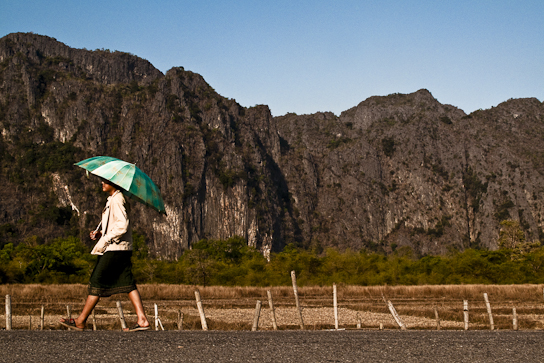 Lots of women carried umbrellas as shade from the sun.

Thankfully we were done with caves for the day and our next stop was Tha Falang, a beautiful and pristine swimming hole popular with the French during their colonial days.  We we cooled off with a swim and then had a picnic lunch of baguettes (thank you French) and peanut butter (thank you Hollie). 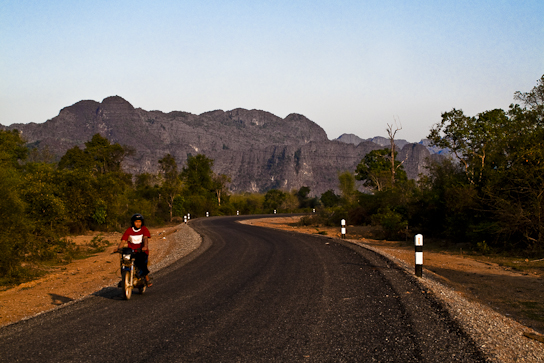 The road through the Hin Boun valley.

Our drive continued through stunning scenery until we reached  our first stop for the night, the town of Nakai.  It was a bit hard to find and we had to track down a man with a key to the guesthouse, but it was a clean, comfortable place to stay for the night and we even found a restaurant with an English menu down the road, so much for eating boiled eggs. 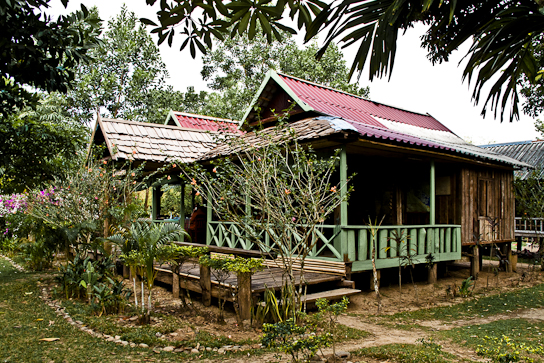 The next morning we drove a bit to the town of Ban Tha Long, were we stopped for breakfast and met up with some of the other people doing The Loop.  We were actually supposed to meet a couple of them in Nakai last night, but they weren’t able to find it.  When they started telling us stories of their rat infested bungalows, I was sure glad that we did.  Also at breakfast we met Ray and Megan, a couple from San Francisco, and we ended up riding the rest of the day with them.  Stuart would later that day refer to Ray as his soul mate (I guess that makes me chopped liver). 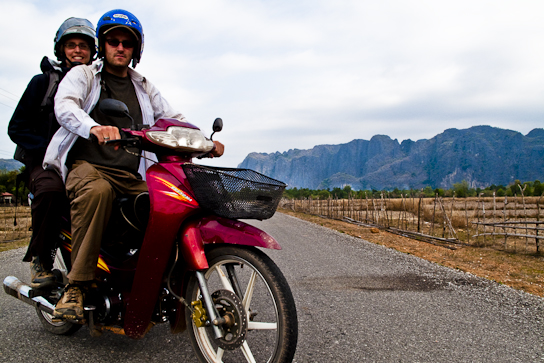 We rode through more gorgeous scenery before stopping for lunch in Nahin.  We checked out a few places to stay there, but decided to continue on towards Tham Kong Lo cave, and we found the beautiful Sala Hin Boun hotel.  Lush,  green and right on the river.  We spent the rest of the day there, enjoying the surroundings and chatting with our new friends.  Stuart took the bike out for a solo ride to see what that 100cc bike could really  do (not much). 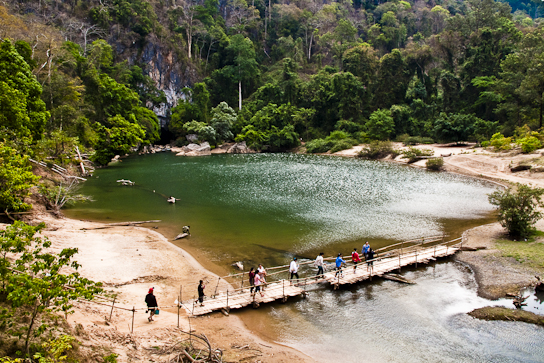 The entrance to Tham Kong Lo is in the limestone wall on the left.

In the morning we visited the Tham Kong Lo cave. I wasn’t too thrilled about another cave, but to get through this one we had to hire a boat, so we didn’t have to scale any rocks,  we just had to get out and wade through a few shallow parts, totally manageable. Apparently the cave was magnificent, but I’ll have to take everyone else’s word for it. 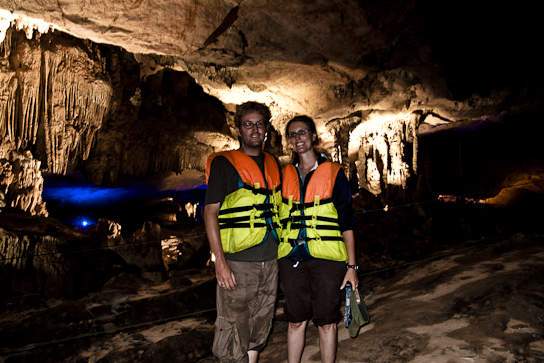 Most of what there was to see in the two hour long ride through and back the 7km long cave that was lost to me, but I could tell it was something special and I still rather enjoyed it. The 40km road to the cave has just been paved so there is no doubt that this sight will soon be filled with loads of tour groups, but for now it was pretty quite, even though we visited on the weekend, and we were thankful for that. 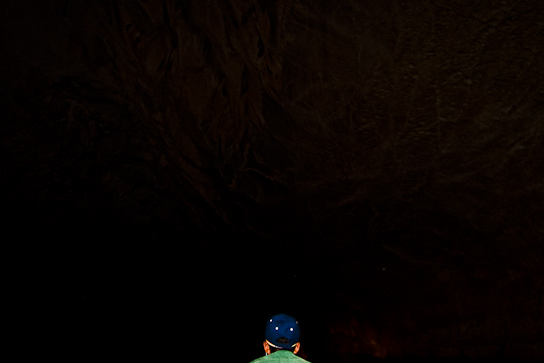 This was Stuart's view for most of the ride.

Stuart and I had a long ride back to Tha Khaek in front of us, so after a lunch of Papaya salad and noodle soup at the cave we headed out. Stuart’s joy ride the day before cost us all our gas and we ended us running out before we could make it to the gas station in Nahin. 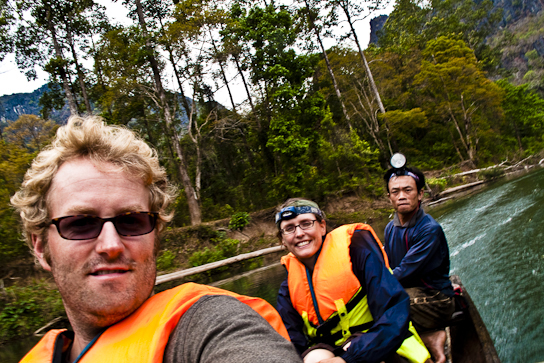 But, in Southeast Asia we have learned that where there is a demand, there is an over abundance of supply and we only had to walk to bike back 1 kilometer to find a guy selling gas out of old liter bottles.  We paid an exorbitant price for a liter and were on our way again.  We thought ourselves lucky when we passed two of the guys from breakfast on a steep hill on our way back.  One of the guy’s bike had broken down and he had paid quite a bit of money to have it fixed, only for it to break down again and the other guy was slowly towing him up the hill. 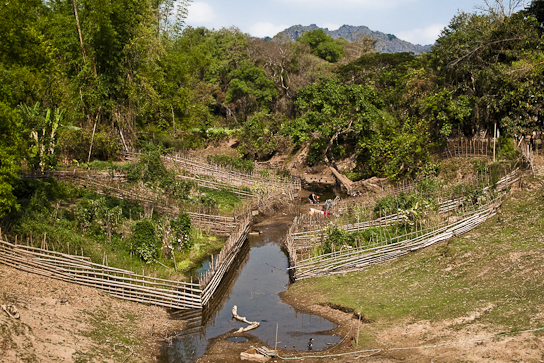 Gardens along the river. 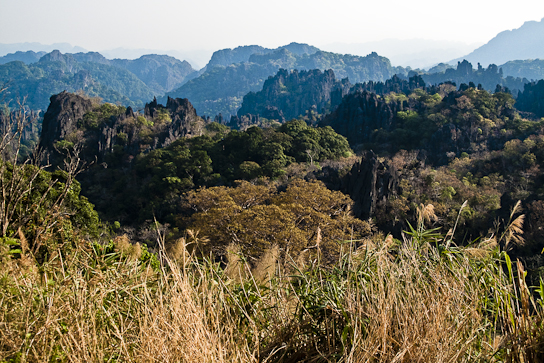 Viewpoint on the way back to Tha Khaek.