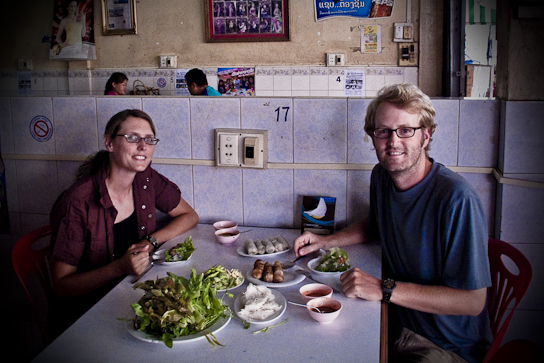 Tina and me enjoying some good eats.

Vientiane, Laos –  We arrived in Vientiane to find the first six guesthouses full, and were forced to join little groups of tourists wandering around looking for an available bed anywhere. We finally found a hotel that was pretty nice and above our budget – but had wifi and a few welcomed amenities like AC and a shower curtain. 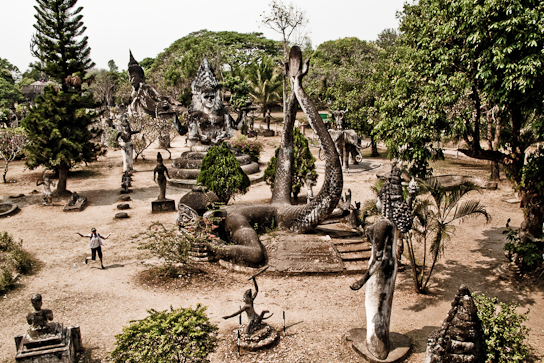 Can you find Tina?

Wanting to test a theory Ray and Megan told us – that if you pay a bit more in larger cities you end up with a much nicer place then doing so in a smaller town – we decided to book the room. So far, this has proven to be true. 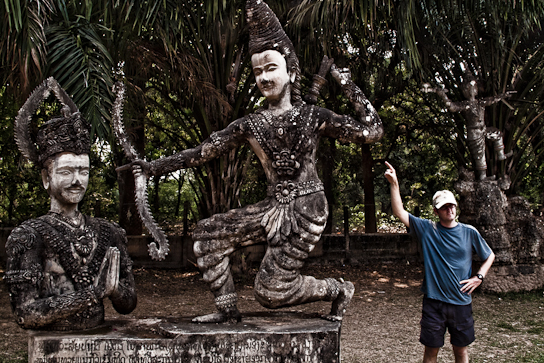 It was totally that guy.

There isn’t much to do in Vientiane except see a few wats and enjoy some pretty good restaurants. Like southern Laos, the pace of life was slow with a noticeable change being the hammocks were now in the back of tuk-tuks, usually giving the driver a perch for half-hearted squawk to passing tourists. But the tone of his call was one of ambivalence, like he was way more into his nap, but assuaged his quilt by at least offering his services. Occasionally we had to wake up the driver to see if he was working. This behavior wouldn’t be out of place in a sleepy little town, but this was the capital of Laos. 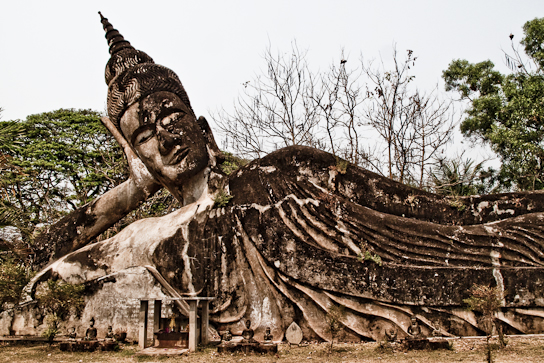 Even the statues take it easy in Laos.

Since we needed a day free of wats, our schedule consisted of walking around looking for food and books while taking a few hours break from the heat by lounging in our hotel room. We had fantastic chocolate croissants, Indian food, and even some lettuce wraps with pork sausages, cilantro, cucumbers, noodles and a couple dipping sauces served fresh at a local noodle place. 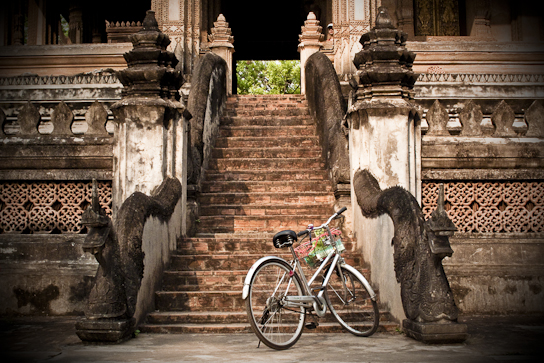 All this was to change when one night, while devouring the best pizza we’d had in months, when Ray and Megan invited us to join them at Buddha Park. What? A planned activity for the day? This called for some dessert! Tina got some crème brûlée and Ray ordered a chocolate molten cake which, when delivered to the table, was the size of a NFL football. And kinda shaped like it, too.

Vientiane also had a little slice of paradise. We found a shop that stocked all Western brands of food – pastas, cereal, potato chips and even a decent selection of Shake-N-Bake. Wanting to appear to have a little culture, we got a baguette, salami and brie for our picnic lunch at Buddha Park. If I was alone I would have totelly gotten some Kettle Chips and Fruit Loops. 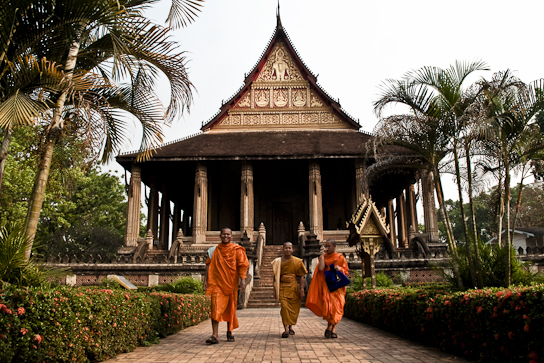 The motorbike we rented to get to the park didn’t have a working horn. Which, if this were Vietnam would be inexcusable, wasn’t a big deal in Laos. But on the way to the park, a truck started coming into our lane and when it was close enough to touch, I reached over and gently tapped on the side. Not a violent hit, but a “hey, there is someone over here” tap. 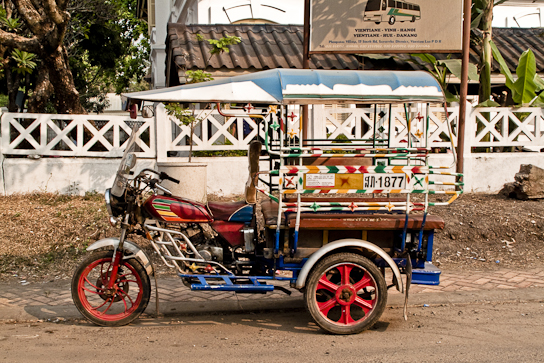 The driver slowed and gave me a death glance when we passed. A minute later he was flying down the road honking and swerving into our lane. He caught up to us and started yelling at me. I kept my cool and he started scaring other drivers. Eventually everyone else on the road got out of his way and he sped off still shouting out his window. 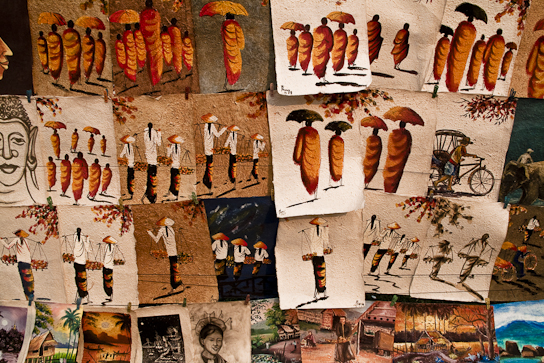 After Buddha Park, it was time for fruit shakes followed by a siesta. Tina decided to spend her time in an internet cafe while I napped. We had heard that there were some very recent changes to Thailand’s visa rules if entering by land and she wanted to get the lowdown. Good thing she researched it – we were now required to get a visa if we wanted to enter by land and stay more then 15 days. And Vientiane was the only town in the north that had a Thai Embassy. 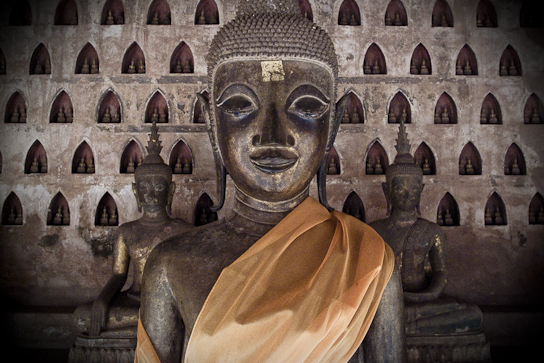 The economic downturn mixed with the recent demonstrations has put a dent in the number of people visiting Thailand, but they also want to keep people from overstaying and working illegally. The new rules – maybe a month old – stated that if you flew into Thailand, you were given a 30-day stay, but to cut down on the number of people staying long-term with visa runs to Laos, entering by land only get you 15 days.

By the time we arrived to the Thai embassy, there was a pretty long wait. We filled out the paperwork and waited to for our number to be called. We did find out some good news, tho: the visa was now free and was good for 60 days. 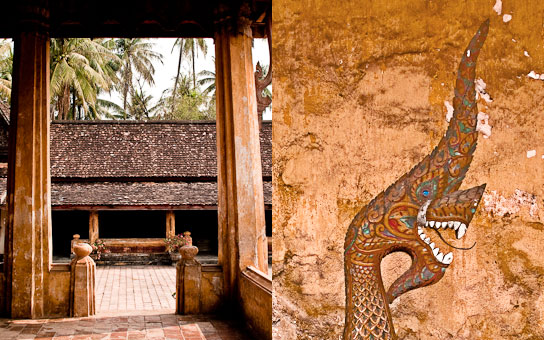 Our motorbike from the previous day had to be back at 11am. At about 10:15 there were still about 100 numbers before ours. Megan had used her passport to rent both their bike and ours, so we had to have our bike back on time or she couldn’t get her passport. The numbers were moving slow enough that we figured I could return the bike and make it back to the embassy by tuk-tuk before my number was called. 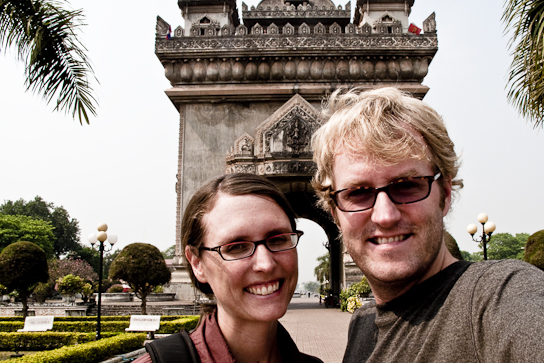 Patuxai - made with US-purchased cement that was intended for a runway in the '60's.

Leaving without a map, I had to use my mad Boy Scout skills to get to the rental shop. I totally went the long way but ended up dropping the bike off in the right place and getting back to the embassy right as Tina turned in our forms. We then had to sit in another room until they gave us a receipt and told us to come back the next afternoon to get the passports back.

Wanting to get in some good sightseeing before having to pick up our passports, we rented another motorbike and crused the city that morning. When we got the embassy, we were the 40th people in line. But then the doors opened and all these people came out of nowhere and rushed the door – in true Asia fashion – we ended up with numbers 116 and 117. 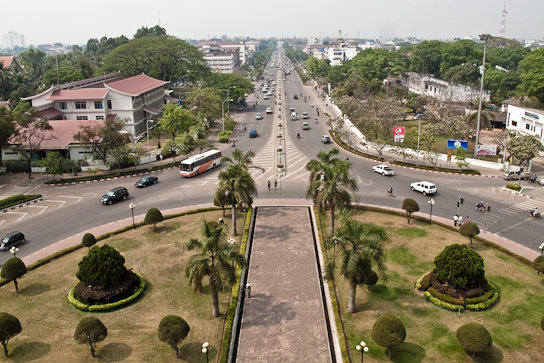 View down Th Lan Xang from atop Patuxai.

While waiting in line we met a guy who runs a non-profit right across the border in Thailand. Ironically, he was doing a border run. But because of his company, he had special privileges from the provincial governor and only had to renew his visa every three months. 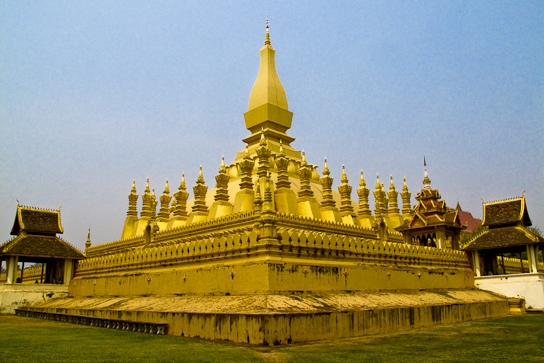 Pha That Luang - the most important monument in Laos.

His non-profit focused on teaching English and computers as well as educating people about wearing a helmet. The helmet laws in Thailand are fairly lax, leading to a number of fatalities which is having an negative impact on Thai society. But the most interesting thing was what he had to say about those volunteer programs which required the volunteer to pay for the experience. He is adamantly this practice, but admits that it’s easier to raise money that way. 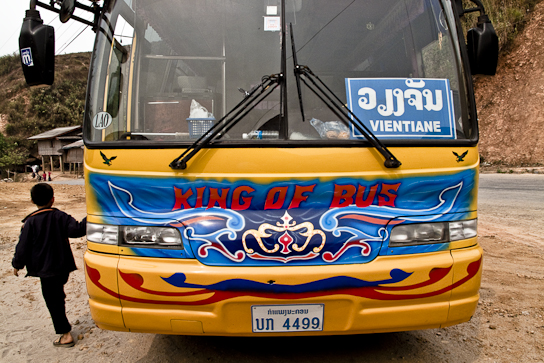 One of the bus companies in Laos.

I mentioned that before I studied in Italy, I looked into volunteering in Africa and South America – working with wildlife, or helping communities develop sustainable agriculture systems. But all these programs were really expensive – sometimes more so then if I visited the country as a tourist. And that I couldn’t understand why I would have to pay to work, and if I was in a little village in Zimbabwe, why was it so expensive?

He said it was all a scheme to make money and that he had helped a woman – five or six years ago – start a very popular volunteer program to teach English in Asia – one where the volunteer has to pay to teach. It’s till running today and is wildly successful. And all the volunteers who had paid to teach for a few weeks not only helped kids learn a little English, they also helped that woman retire to the south of France.