Luang Prabang, Laos – You can tell you are getting tired of planning when you start relying on the walking tours in the guidebooks. The tour in our LP seemed pretty good so we set out for a morning full of lots of wats. This being Laos, the town was pretty quite and not much was happening. And since the rice season was coming up, there was massive burning in the hills around the town, giving the town a sepia tone and limiting visibility. 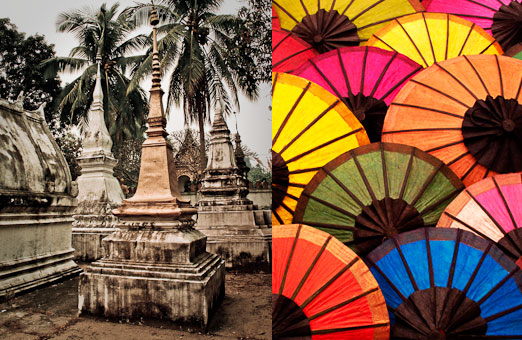 Wat Choumkhong; Umbrellas for sale at the market.

While passing a wat not on the tour, we noticed a few monks trying to get green mangoes off a tree in the courtyard. They were really into it, laughing and playing around. We fell into a long conversation with a monk who spoke fairly good English. He was funny and told us about his life and let us ask anything we wanted. Most of the monks there were in their mid-teens, so I asked about relating to their friends, and more importantly, if they missed girls. He laughed nervously at this and said no. But I didn’t believe him. 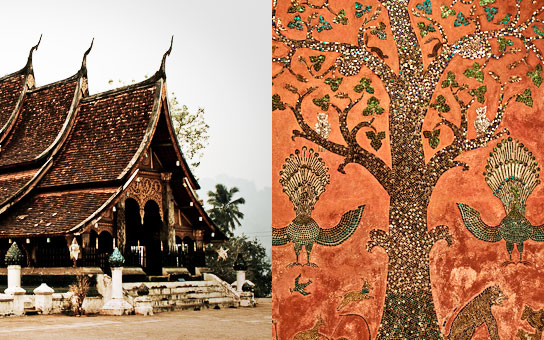 Once they got enough mangoes down, they soaked them in a pot of water. Another monk came over with a bowl of homemade chili sauce. After about ten minutes they sliced the mangoes and started eating them, giving us a few and laughing when we found the chili sauce spicy. One monk kept bragging about how he didn’t think it was spicy. 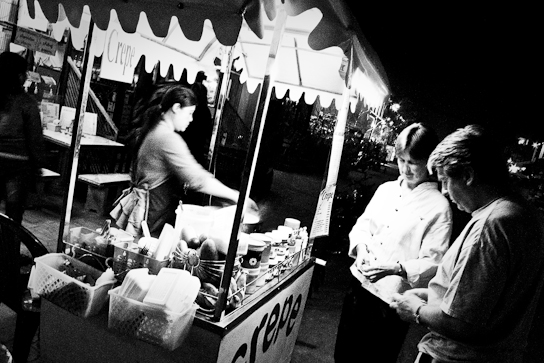 These monks went to town on these mangoes. I just saw all these arms and saffron robes flailing around as the mangoes disappeared from the pot. A few other tourists came around so the monks took the remaining mangoes and hid behind a wall to finish eating. The monk who was talking with us explained that they weren’t supposed to eat after noon. So they decided to hide from the tourists instead of explaining that it was ok for them to eat mangoes. 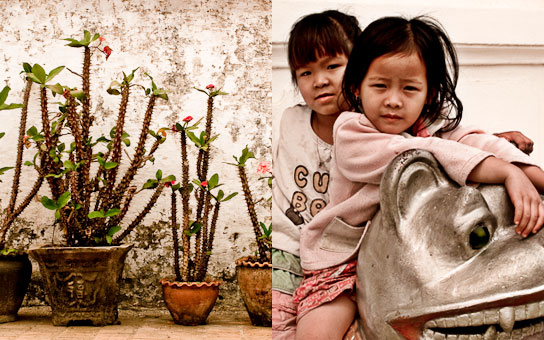 Plants along a side street; Kids playing at a temple.

To escape the afternoon heat, we visited the Royal Palace, now called the National  Museum, which had a special photo exhibit in around back. The building was originally built as on official royal residence, but has since been turned into a museum and filled with Buddhas and weapons while maintaining the living quarters for viewing. There was also a collection of royal cars given by the US government. Most cars were huge boats like Lincoln Continentals and an Edsel – all from the ’50s and ’60s. We found it funny that there was also an actual boat in the collection. 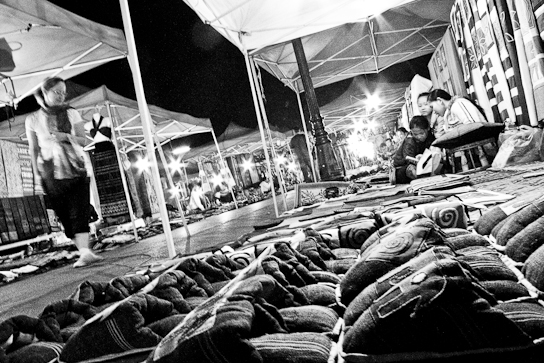 Slippers for sale at the night market.

A few travelers we’d met suggested going on a 2-day elephant mahout (elephant trainer) course at one of the many camps around Luang Prabang. So after exploring the night market, we visited a few companies offering the treks. They all offered the same things – walking them, learning commands and bathing them – and talked a lot about how they promote the welfare of the elephants and other socially responsible aspects of their company. 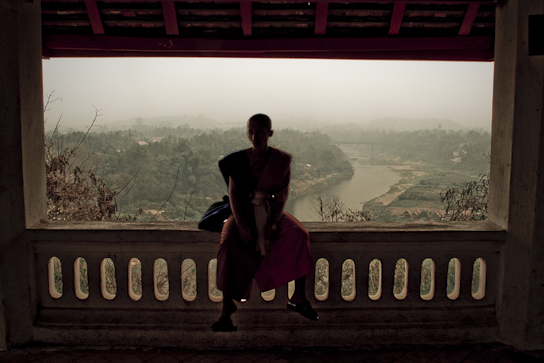 Monk relaxing atop Phu Si with the Mekong in the hazy distance.

For the 2-day course, the cheapest price we would get was around $100 each. Which sounded fair until you look at the details. The total time you spend with the elephants was around four hours. The rest of the time was spent going on a little hike around the camp, or swimming in the water, or hanging out in the huge ridiculously posh hotel at the camp. The monstrous waste of resources of a hotel, coupled with how little time was actually spent with the elephants didn’t seem to justify the price at all. But, unsurprisingly, we didn’t really have a choice anyway because the tours were all sold out for the days we could go.

We planned to meet up with Kris when he got to town, which was supposed to be a couple days later, but as we were going to lunch, we ran into him on the street. He had changed plans and arrived by overnight bus that morning. 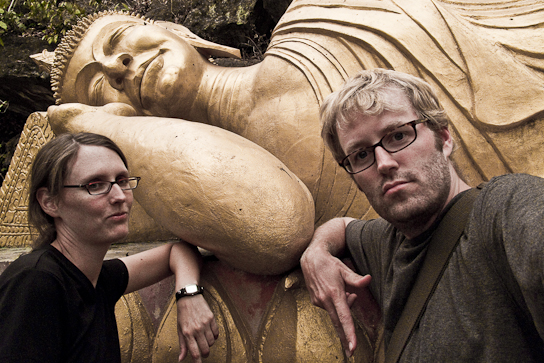 Tina and me chilling with a reclining Buddha.

After lunch we walked up Phu Si, a hill in the middle of town with a few temples on the slopes and one at the top. It also affords great views of the city – assuming it’s not covered in hazy smoke. The walk up was nice and the temples were interesting. One thing unique in Thailand has been the emphasis on the “Buddha’s of the day.” Most temples here have a row of Buddha’s representing each day of the week, and you can give an offering to either or all. I feel bad for the Monday Buddha. He usually has the smallest collection. 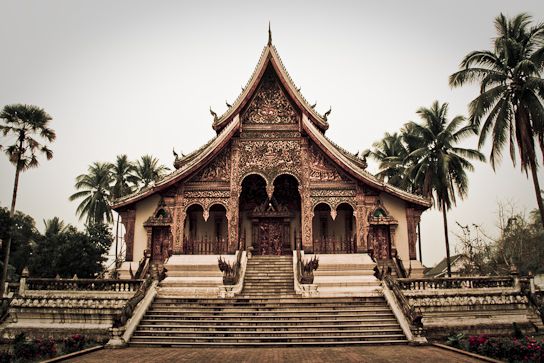 There were a few water falls in the countryside we wanted to visit so after descending Phu Si, we set about finding a place that rented motorbikes. Tourists had not be allowed to rent bikes in the past, but we heard that had changed. We found lots of places who rented bikes. Unfortunately, they didn’t own the bikes themselves, they were just booking offices for the one company that was allowed to rent bikes to tourists. 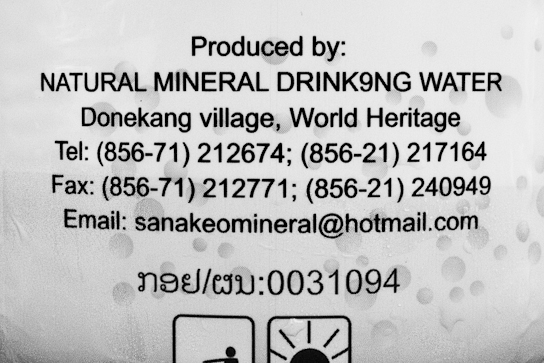 So many funny things about this bottled water label.

Since there was only one company, or a mafia, they charged whatever they wanted – which was $20 for the day. The average we had paid so far was around $5 so there was no way we were going to pay that much. We got so desperate for a cheaper option that we started asking people around town if they or a friend had a bike to rent. This had worked in the past, but I think people were kinda scared to rent us bikes. They didn’t want to wake up the next morning with handlebars in their bed.

Early every morning in Luang Prabang, monks walk around town collecting food. Apparently it’s quite an amazing sight, but in recent times the camera-toting tourists have come to outnumber the monks. There are homemade signs up around town begging tourists to respect the tradition by staying the heck away. 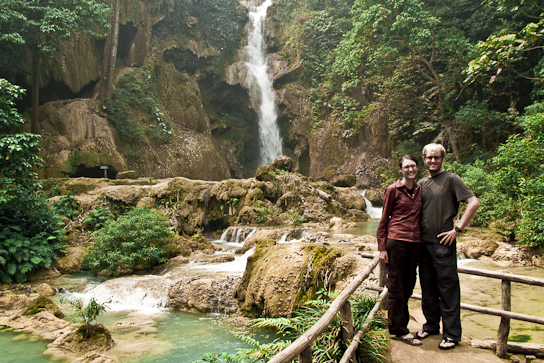 Tina and me at Tat Kuang Si.

We thought about witnessing these events from afar but the alarm went off that morning, we decided we would be better than your average tourist and respect the monks, and ourselves, by sleeping a while longer. Our pious self-righteousness was rewarded by ordering bagels and cream cheese at the gourmet cafe near our hotel. Funny how such boring things at home become treats while on the road. 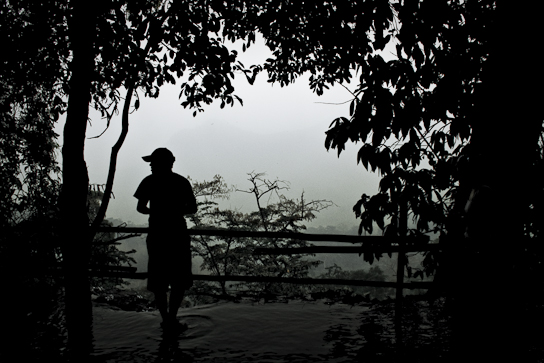 Lookout from the top of the falls.

When the hunt for motorbikes proved fruitless the previous afternoon, we had walked down to the riverside and found a sawngthaew (converted pickup truck) who would take us to the Tat Kuang Si waterfall, wait for us, then bring us back for about half what it would cost to rent motorbikes. But when we went to meet him, he was a no-show. Which was great because we found some other guy who took us for less. 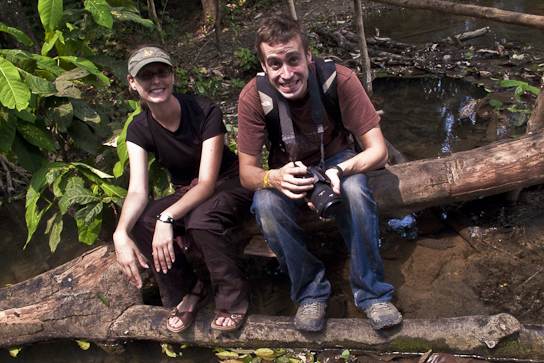 Tat Kuang Si was one of those scenes from a post card – the falls poured into a series of pools which terraced slowly down towards the swimming area. The water was emerald green and surprisingly clear. We hiked up a path to the side of the falls, hoping to reach a swimming area near the top. This had been blocked off recently so we kept trekking to the top and got a nice view of the surrounding jungle – obscured by smokey haze of course. 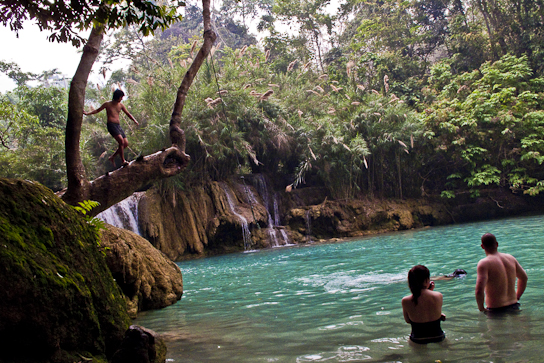 Rope swing in the swimming area.

Back at the bottom we ate lunch then went to explore the swimming area. There were rope swings, more waterfalls, even an old watermill. But at this point the weather had worsened and the water was a bit too chilly. And due to a miscommunication, we didn’t have as much time as we’d hoped, so the sawngthaew driver was patiently waiting for us back in the parking lot. 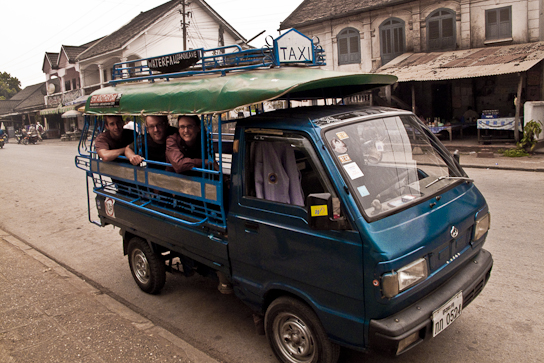 Kris, Tina and me returning from the falls in a sawngthaew.