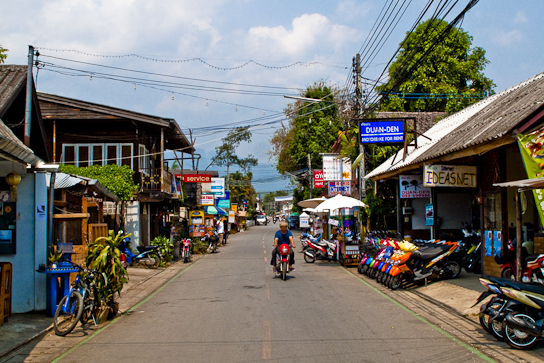 Pai, Thailand – Pai (pronounced “bye”) is one of those glorious small towns where there isn’t much to do.  We were lured there by this and its hip, artsy feel.  It’s a Lonely Planet proclaimed “traveler’s mecca”, but the loads of Westerners doesn’t take away from the town’s laid back atmosphere. 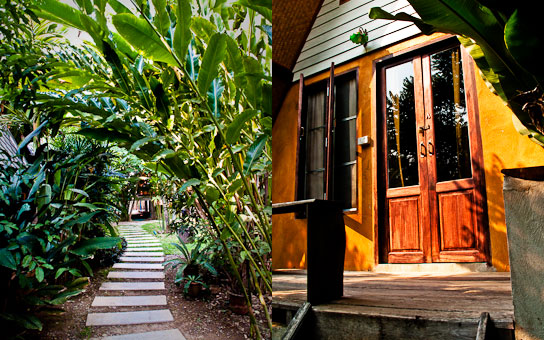 The locals have embraced tourism in a way unlike most SE Asian towns, in that they have incorporated themselves into the traveler’s community as artists and funky shop and restaurant owners as opposed to strict businessmen.  I was even pleasantly surprised to see several Thai/Western couples where the man was Thai and the woman was Western.

After a windy four hour bus ride from Chiang Mai we set off on one of our least favorite activities – finding a room.  Stuart and I don’t always see eye-to-eye on the types of places we want to stay.  I like air conditioning (it is over 90 degrees every day), an ensuite bathroom and a clean place that doesn’t look infested.  Stuart gravitates towards places that are “interesting” – such places often lack the few amenities that I desire.  Our opposing views came to a head in our search this afternoon, but I won out and we booked a cute concrete bungalow at a guesthouse called Breeze of Pai. 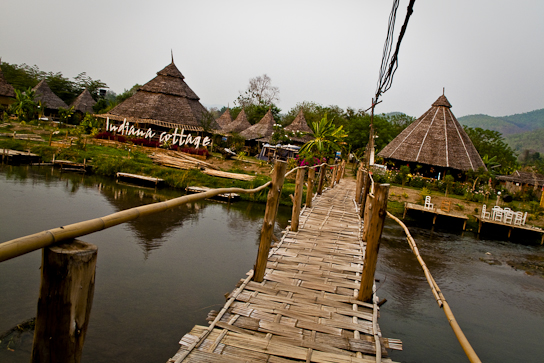 Most of our time in Pai was spent enjoying the food (more pineapple curry, mangoes and sticky rice), atmosphere of the town and trying to avoid the heat.  We rented a motorbike and toured the surrounding countryside.  Our first destination was a waterfall where we hoped to go for a swim. On our way to the falls we passed several locals who put their fingers to their lips to imitate smoking

We guessed that they were trying to sell us either marijuana or opium; the down side to so much foreign travel is the drug trade that has grown with it.  In addition to being overrun with drug dealers the waterfall was too dirty to swim in so after lunch  we headed to the town’s public swimming pool – a happening blaring cool tunes inhabited by hip Thais and Westerners alike. 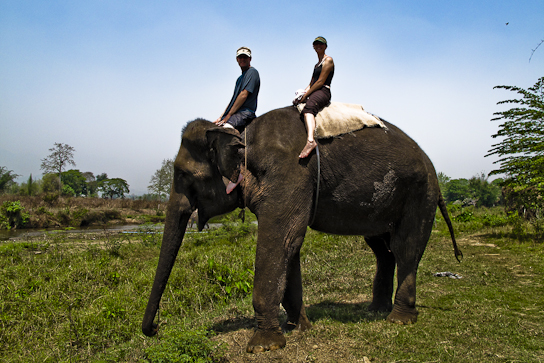 The highlight of our trip to Pai was visiting Thom’s Elephant camp.  Following our disappointment at the outrageous prices in Laung Prabang, we were very much looking forward to a reasonably priced two hour ride, which included a ‘bath’ in the river.

Immediately after climbing atop our elephants, Stuart and I realized that it was going to be a long two hours.  Not only was it miserably uncomfortable on the boney elephant’s back, it was also a bit frightening.  More than once in our journey we clung to the rope around our elephant’s back, and each other, fearful of tumbling from the great beast. 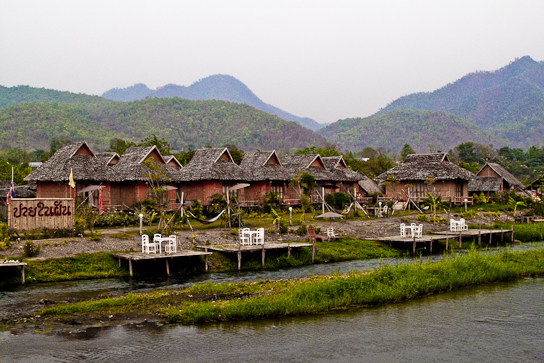 Comfort aside, it was really fun, even if the ‘jungle ride’ was really just a trail through some hills that had recently been burned.   After about an hour we arrived at the river.  Out mahout had us remove our hats, cameras, and any loose items of clothing.  He even made me take off my eye glasses; which I thought was overkill just to ride into the river and get splashed a bit, but I obliged.

Three of the four elephants in our group, with their unwitting riders, waded into the water and kneeled. On command from their mahout, they sucked up water and blew it back onto us.  Lucky for me, I was in front, so I got most of the elephant’s spray.  After a few minutes of that, our mahout gave a command which caused the elephant to shake violently from side to side, tossing us both into the river.  I was scared at first, but after being tossed the first time I realized what fun it was, and we would climb back on again and again.

After the elephant threw us a few times the mahout gave the command for the elephant to stand up and give us a few more sprays, then suddenly it started to shake side to side and I thought, “there is no way we can fall safely from here”, but bam! we did – falling pretty deep into the river.  It was terrifying.  It was awesome.

After our ride we soaked in the natural hot springs at the camp and then headed back to town and relaxed a bit.  That evening the lights went out in our room and we realized that the electricity was out in the whole town, an occurrence that must happen frequently in Pai because all the street vendors where ready to wait out the outage with candles and flashlights. 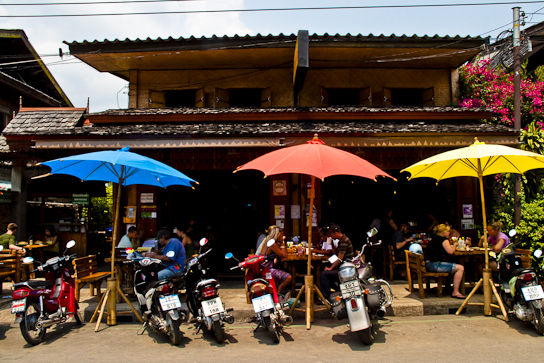