Kuala Lumpur, Malaysia – I admit that I didn’t know much about Kuala Lumpur, or KL, before visiting it.  I knew there were some tall buildings, the Petronas Towers, that everyone seems to bring up when you mention KL, which our friend Kris, having just visited KL, “the most boring building in the most boring city.” Needless to say we didn’t have high expectations for the city going in, but our time there was actually quite interesting and anything but boring. 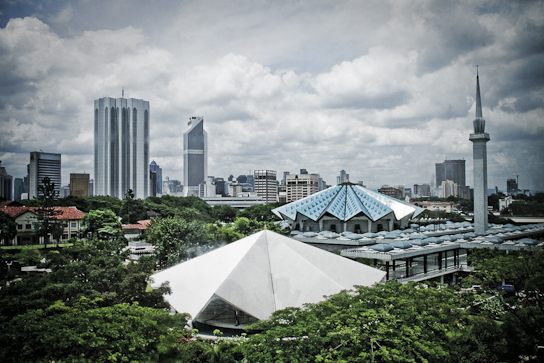 On our first day we explored the Islamic Arts museum, which is a well done museum featuring an extensive collection of decorative Islamic arts.  We enjoyed it despite some serious museum fatigue. We met a Kiwi couple and a kinda weird Aussie girl  at the museum and had lunch together at the Bird Park in the Lake Gardens district, where we got to see a couple of really cool birds while dining. 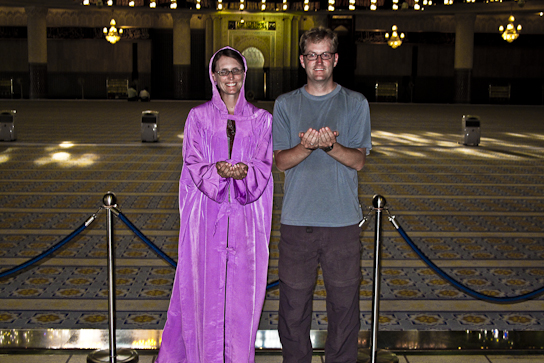 After a brief visit to the Orchid Gardens we then visited the National Mosque.  We gals had to wear long cloaks that covered our heads and arms and legs.  A guide explained a little bit about Islam and about the mosque itself and was intent on dispelling any misconceptions we had about Islam and Muslims. 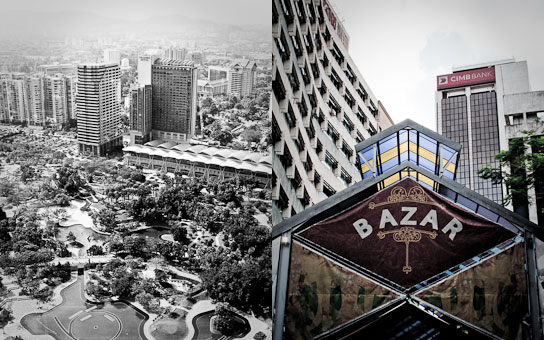 I have to admit that I am pretty ignorant about the Islamic faith and Malaysia being the first Muslim country I have visited, I was eager to learn more and dispel some of my own prejudices.  Seeing girls in head scarves had become normal pretty quick, but I couldn’t help staring at the occasional woman who was dressed in a full black dress and veil. 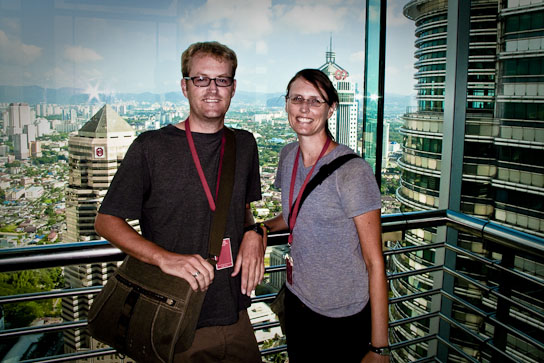 Stuart and Tina on the viewing deck of the Petronas Towers.

The guide at the mosque was keen on pointing out the similarities between Islam and Christianity and Judaism and easing our concerns about the oppression of women.  It’s not that they are not allowed to pray with men in the mosque, they are just given the option to pray at home to make it easier on them, things like that. 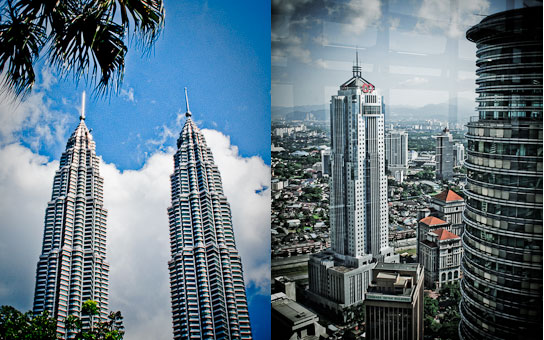 The Petronas Towers; Some other tower.

The mosque also had a couple dozen information pamphlets, anything from the English translation of the call to prayer, to Polygamy, to Jihad.  I picked up a few, curious as to what they had to say.

I was especially interested by the pamphlet explaining women’s dress in Islam.  Sensitive to what I perceived as oppression in many of the religions we have come across on this trip, I was pretty curious as to why Muslim women cover their heads.  In the Russian Orthodox churches I had to cover my head, while Stuart didn’t. In Buddhist temples there were some rooms that I was not allowed to enter. In Hindu temples women are not allowed to enter if menstruating, and of course in the mosques I have to cover myself from head to toe, where men could enter with just a tee shirt and shorts. 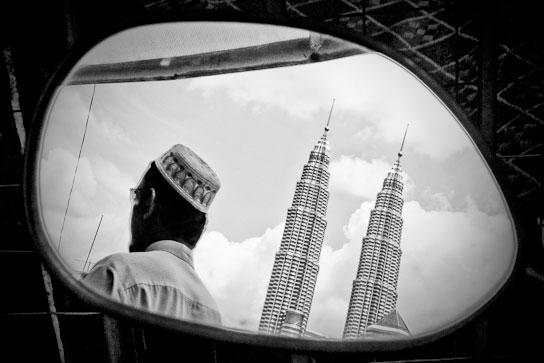 Reflection of a Muslim going to prayers reflected in a motorbike mirror.

The pamphlet made a good point explaining that the hijab is a statement of women’s Muslim identity and liberation from the western lifestyles that enslave women to the fashion and cosmetics industries.  Unfortunately, the pamphlet was more of a defensive attack on prejudiced Westerns than informational.  I still don’t know why it is women who have to cover their heads, while men don’t; but I do believe that most women wear in hijabs to show their devotion. I’m still bothered by the fact that in most religions its the women who have the extra rules of dress and who are excluded from participating.

Having been exposed to so much culture over the past months, we decided to do something that was purely for fun on our second day.  We grabbed our swimsuits and headed to the Sunway Lagoon water park.  Stuart and I are both waterside enthusiasts and I was very curious to see what Muslim women wore to a water park.  Do they swim in their headscarves, wear bathing suits?

My questions were quickly answered on the first slide, where we saw a women wearing the Muslim swimsuit.  It had a tight fitting hood like you see on old scuba diving suits, a loose fitting top, and pants that looked like a track suit.  I was happy to see that the rules of dress didn’t preclude the Muslin women from partaking in the watery fun. 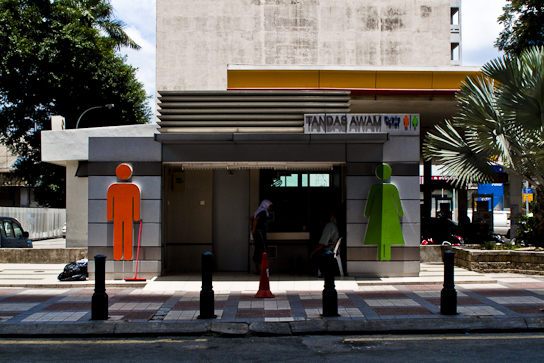 "Bout time someone picked up a broom around here." - Tina

Sunway actually turned out to be one of the most educational places we have visited on this trip.  Next to the Muslim women in their old-timey scuba/tracksuit swimsuits, and some in full burka with veil, were Chinese and Indian men and women in shorts and tee-shirts and Westerners in bikinis and speedos. I was glad that I was wearing my board shorts and sunscreen shirt over my bikini and that Stuart left his Speedo at the hotel. The water park turned out to a fascinating view into the multiculturalism of Malaysia and we learned a lot that day, despite our intentions.

We rounded off our cultural exploration of KL with visits to Chinatown, Little India and Kampung Baru, exploring their neighborhoods, temples, and of course sampling their delicious food.

And, Okay so the Petronas towers were kind of boring, but the view from the skybridge is cool and the 3-D propaganda film we were made to watch extolling the virtues of the Petronas Oil and Gas Company was kinda funny.