Siquijor, Visayas, Philippines – The island of Siquijor turned out to be the mellow island paradise we’d been looking for: little villages and the occasional place to stay on a beach. The island also had a sealed coastal road providing stunning views and almost zero traffic. So after disembarking in Siquijor Town after the ferry from Dumaguete, we rented a motorbike and headed around the western edge of the island in search of someplace to stay. 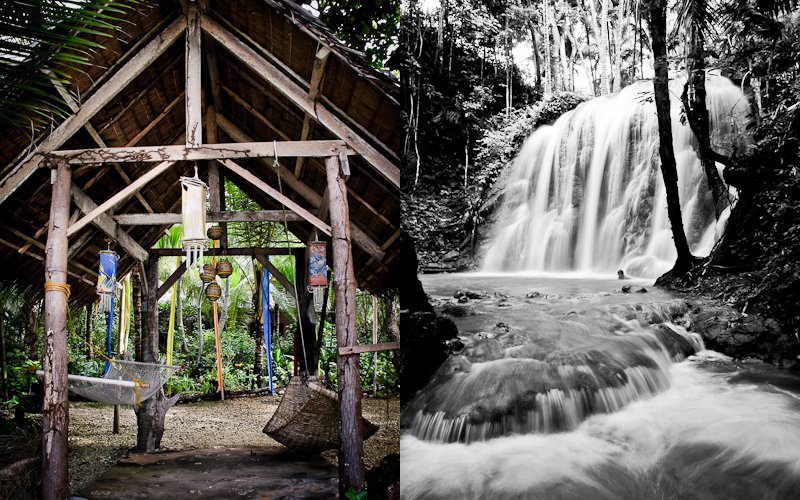 We ended up at Royal Cliff Resort, which sits above the beach on terraced cliffs with rooms tucked away within its lushly landscaped grounds. Now, it should be noted that most places to stay on the islands are called “resorts”, but they are hardly the modern immaculate palaces we have back home. Most of them – at least in our price range – are beautifully landscaped but have poky cement-walled rooms with a fan, a cold shower and mosquitos. But for around $20 a night, you can’t complaining.

Since the islands are so small, and the resorts are so spaced out, the biggest downside is that you’re usually stuck eating at your resort – most villages are too small to have restaurants; the food is always overpriced and underwhelming. Fortunately Michael was staying about 10 minutes away at a backpacker place, JJ’s, which had better, and cheaper, food – so we always ate there.

In the morning we headed out to explore the island by motorbike. Our plan was to head inland to some waterfalls, then up over the mountain and down to the beaches on the eastern coast, then take the coastal road back to the resort.

After 30 minutes along the coastal road, we turned inland and started heading up the mountain in search of Lugnason Falls. After a few wrong turns around some villages, we finally found the little sign pointing out the path to the falls. We hiked down to the water, had a refreshing dip, then got back on the road. 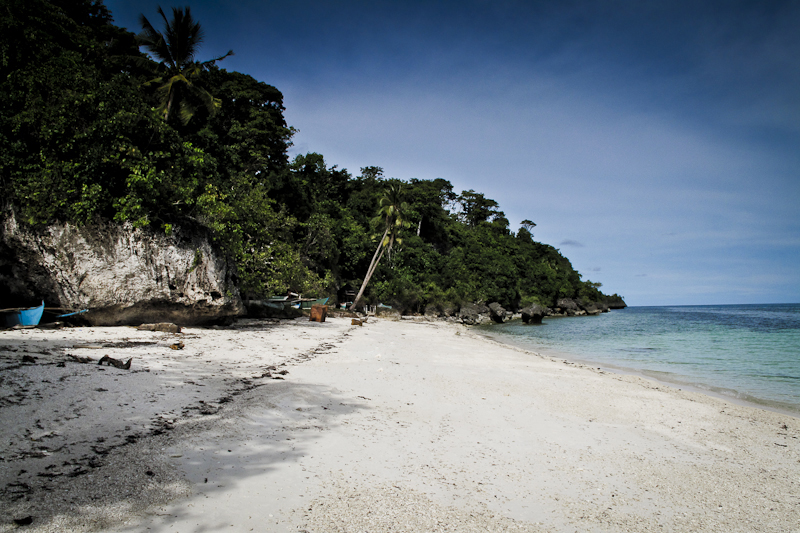 Most islands in the Visayas are beaches around the outside and mountains covered in rain forests in the middle. As we continued our climb the weather became cloudy and the condition of the roads started to worsen – the recent heavy rains weren’t helping things either – mold and mosses were slowly overtaking what little pavement was left.

As we were making our way through a village, our bike slipped on the road and went sliding out from under us. Thankfully we weren’t going to fast, so other than some nice scrapes on Tina’s arm and a slightly bent foot pedal on the bike, everything was fine – which was pretty amazing considering we weren’t wearing shoes or helmets! I can already hear my mom yelling, What?! You weren’t wearing shoes?!

The crash gave Tina the worries, so anytime the going got tough, the not-so-tough would hop off and meet us further on up the road. But as this became more common and Michael began to slip on his bike, we got out the map and saw we were about a quarter of the way to the top. Yikes! Time to head back to the coast. 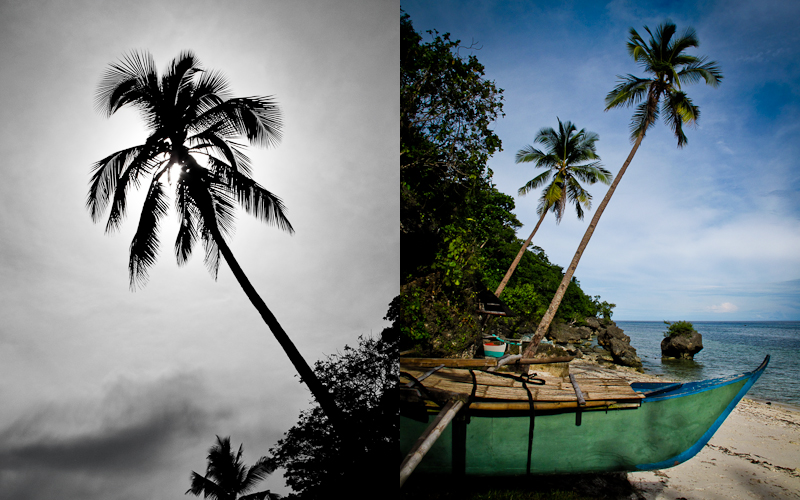 It was early afternoon by the time we made it Lazi (la-zee) – the only town in the southeastern side of the island. We were hungry and pulled over at a little stand and I finally got my fried bannas (delish!) – guess they start early around here.

Across the street was a college which was divided into girl’s section and and boy’s section. The girls in class were all pressed up against the window calling out to Michael but he didn’t seem to appreciate the attention. When we hollered that they should come out and talk with us they screamed and giggled – then the teacher started yelling.

The boys were on lunch break and a few were hanging out with us at the food stand. They were very inquisitive about where we were from, Michael’s experience in Korea, and what America was like. They were studying to be engineers, mechanics or civil planners – which seems to be very common in the Philippines. College students study something practical, usually a trade or skill which leads directly to a job
rather than just go for an education hoping to find a relevant job afterward.

After lunch we worked our way further east to Kagusua Beach, a lovely undeveloped small strip of white sand and clear water tucked away in a cove well off the main road – the only way to get here is by a couple windy dirt roads. We had the place to ourselves for a couple hours until a few local kids came by to catch some sea urchins for lunch while taking hits from a plastic jug of fermented coconut wine. 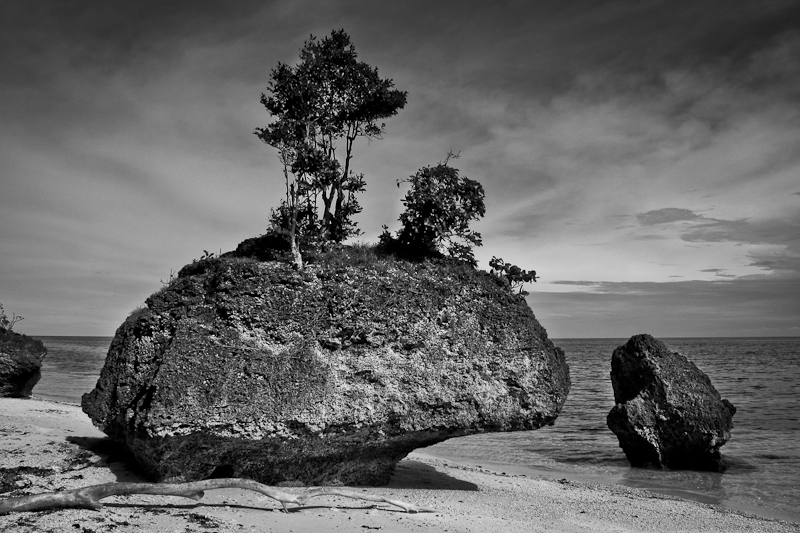 Further up the coast was Salagdoong Beach which must be some kind of play land for locals. It’s in a little cove with a small hotel, pool, and restaurant – where we got a huge platter of excellent fried rice for about $.50. The beach was nice and had a rock outcropping with a pagoda, two high dives, and a water slide – the latter of which we snuck in one slide before being asked to pay. We refused and instead went off the high dives which were free.

On the beach we started talking to some locals about the island and Filipino life in general. Still disgusted by the number of sexpats in Dumaguete, I brought up the topic, curious what he thought. He said that while most Filipinos don’t like it, they understand it. There aren’t many opportunities for women to make money or have a good life here, so they get involved with Western men hoping to be whisked away to a better place.

On the ride home I was thinking about his response. I started thinking about our day: the hidden waterfalls, secluded beaches, good food. I was hard pressed to think of a better place than this.