Semuc Champey and Antigua, Guatemala – We decided to take a tourist shuttle from Livingston to our next location, Semuc Champey, because it would take at least three busses and over 12 hours if we tried to do it by local busses, and there was a good chance that we couldn’t make it in one day and would have to stay overnight enroute. Sometimes a little extra money is worth the connivence. 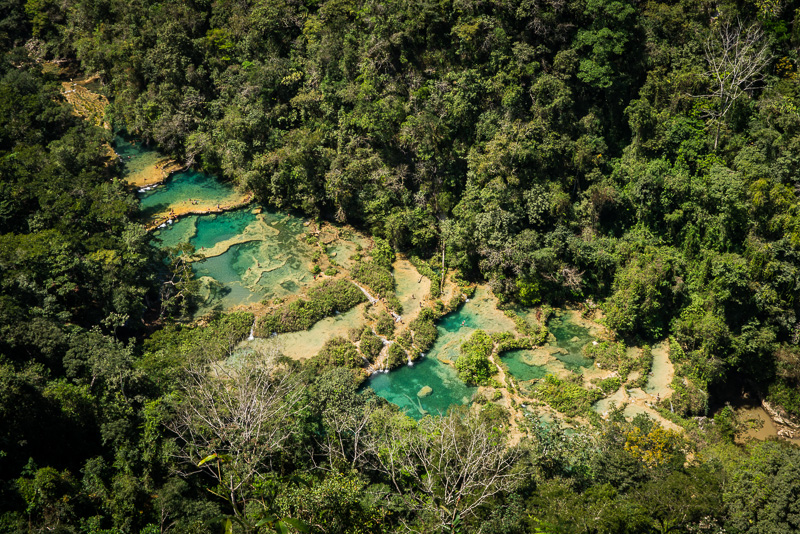 Semuc Champey from above.

We started with another beautiful trip down the Rio Dulce and then met the shuttle in Rio Dulce town. The shuttle got a late start and we ended up waiting for another passenger who was also late – a total hippy that later admitted to Stuart that we was late because he was high (he also admitted that he had head lice). 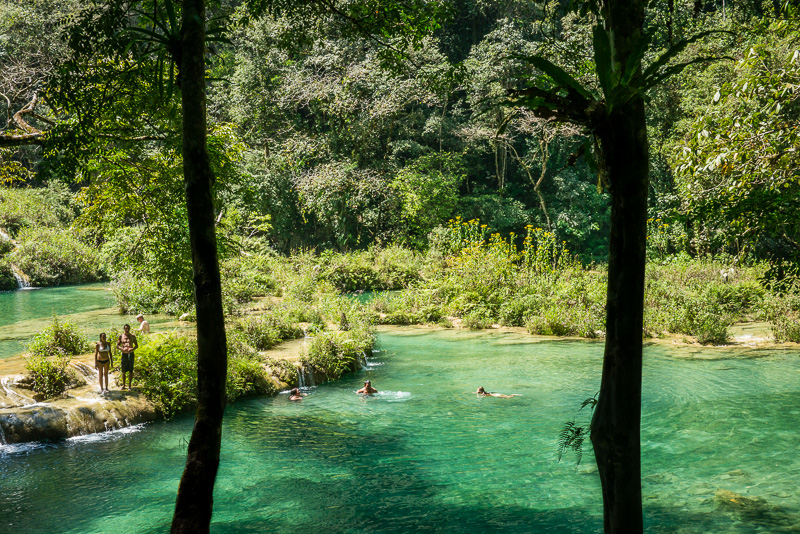 The pools of Semuc Champey.

It was a slow, but interesting ride to Lanquin. We passed small villages and nice scenery as we wound our way up into the Guatemalan high lands. The hippy dude smoked cigarettes and weed in the back of the van and we stopped occasionally to pick up and drop off some locals along the way. I guess the driver decided to make some extra cash.

We didn’t get to Lanquin until about 8:30 pm (11 hours after leaving Livingston) and then had to sit in the back of a pick up truck for the last, excruciatingly slow, eight kilometers of our journey. The drive was worth it – our hotel was just a five minute walk from the entrance of the Semuc Champy park. 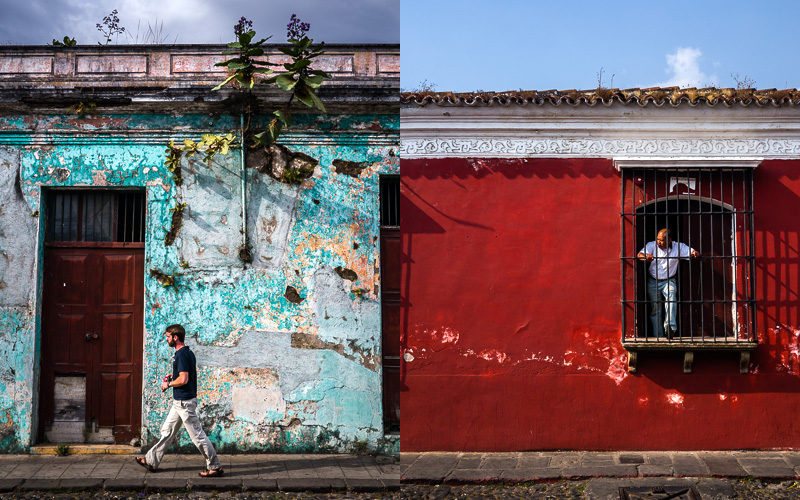 Who you looking at?

Semuc Champey is a park with springs running onto limestone rocks forming several freshwater pools that are clear, blue, and great for swimming – while another river runs under the rocks. The workers at the park were striking, so we didn’t have to pay the entrance fee to get in. Usually, I wouldn’t cross a picket line but they seemed happy for people to visit, I think it was more about not collecting money, than closing down the park. We did end up saving quite a bit of money since we visited the park four times in our two days there. 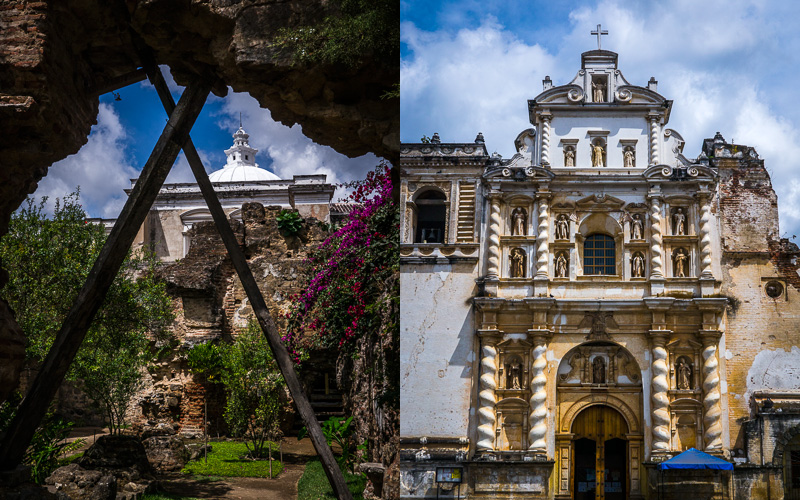 Swimming in the pools was pretty fun. Each pool was a foot or so below the other, so you could jump, or for some of them, slide from one pool to another. We also got free pedicures: leave your feet still for five seconds and there would be tons of little fish nibbling at the skin! I think people pay good money for treatments like this in salons.

At night, there wasn’t much to do, so all the tourists staying at our hotel would have dinner and chat. We met some cool people, including some cool people from Tallahassee – a travel first! 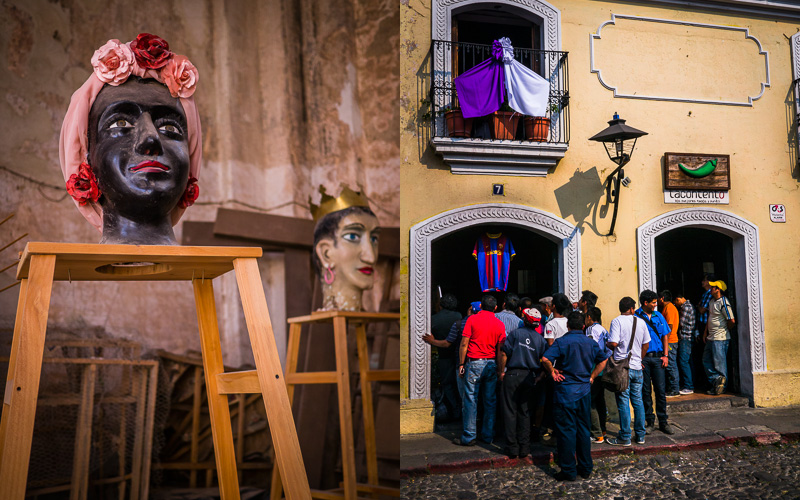 Getting ready for the Semana Santa parade; Gathering for a fútbol match on tv.

After two days in Semuc Champey we took another tourist shuttle to Antigua, the former capital of Guatemala. It was another interesting drive going from Alpine forrest to tropical as we wound our way back down the mountains. It was also pretty eventful. At one point along a busy road one of the bags fell off the top of the van and into traffic – nearly causing an accident but the trucks and cars behind us managed to swerve around it and the driver was able to fetch the bag before it got run over. We also passed a woman who was hit (and I think killed) on the road. I didn’t realize we were approaching an accident and I was gazing out the window while listening to a podcast – and then there she was. It was pretty upsetting.

We got to Antigua around 4pm and had to check out several hotels before we found one that was decent – we probably paid too much, but I wanted a private bathroom and hot shower. We keep joking that we are getting soft in our old age. 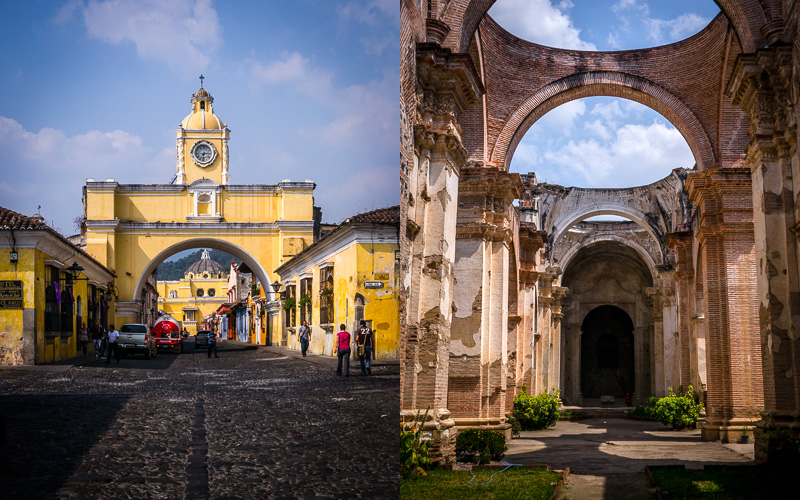 Antigua is a really cool city. Its the former capital, which was eventually moved to Guatemala City because earthquakes kept ruining the city. Turns out though, that old earthquake ruined churches are really cool. We spent a lot of our time touring the churches and walking the city’s cobblestone streets. There was one ruined church that was turned into a hotel – a good example of how to ruin a good thing (although I’m sure it was a lovely place to stay, if you could afford it).

Antigua is surrounded by volcanos s0 we decided to take a tour to hike one of them. Pacya is an active volcano and it is also the closest. People used to be able to hike up to the rim and look into the crater, but part of it collapsed a few years ago during an eruption. We were driven about an hour to the base of the volcano, and then a local guide took our group up.

As we started the hike, we were followed by a bunch of guy with horses offering rides up. It was a steep, dusty trail, somewhat challenging, and the guys kept saying things to try and discorage you from hiking, so that you’d pay them for the horse. I found them to be really annoying. As I am usually the last hiker in groups, I found myself being constantly heckled by these dudes and walking next to the horses that kicked up a ton of dust. Thankfully they only followed us halfway and then turned back. Even if I was super tired and wanted to ride a horse, I wouldn’t have paid these guys a cent! 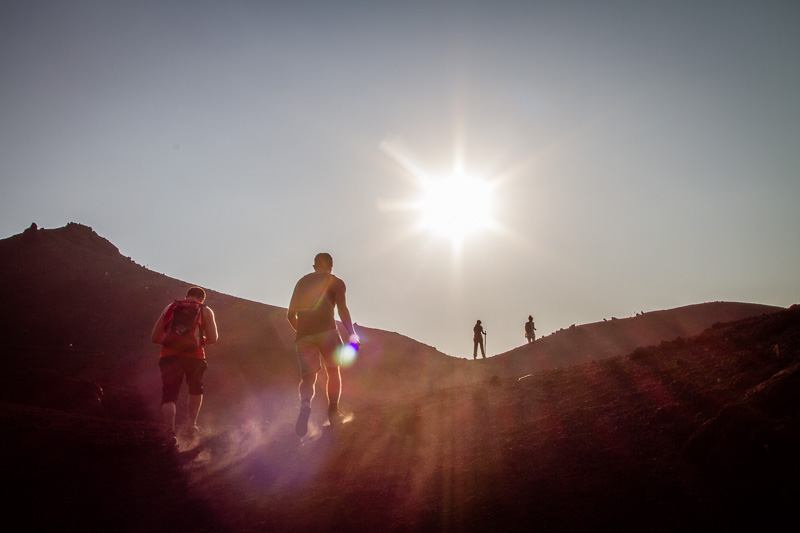 Once at the top, the clouds that had persisted all afternoon cleared and so we got great views of the smoking top of the volcano. We also got to roast some marshmallows over the hot steam vents in the rock. Then, we had to boggie to get down before it got too dark. We practically skied down on the loose volcanic rock. I was emptying out rocks from my shoes for days! I also developed a nice smokers cough from inhaling all that dust.

After Antigua, we decided to go to Quetzeltenago (aka Xela) so that we could do a three day hike from there to lake Atitlan that sounded pretty cool. We decided to take the local, chicken bus from Antigua to Xela instead of the tourist shuttle since it wasn’t that far and we would only have to take two busses.

Both of the bussess were super crowded, and we had to squeeze into whatever sliver of seat that someone offered up and then spend the entire ride trying not to fall off the seat or onto the floor. I decided to put my little shoulder bag in the overhead luggage rack, because holding on to it was way too difficult. Rookie mistake. 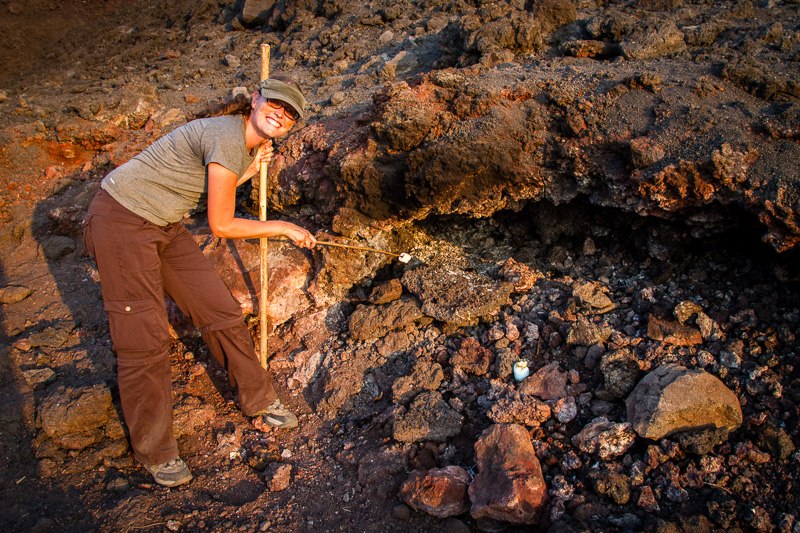 I thought I had kept a good eye on it – Stuart was watching it too. But, I later discovered when we got to our hostel in Xela, that I had been robbed. Someone unzipped the small front pouch of my bag and then cut through to the main compartment in the back (and through my nice raincoat), and then unzipped the small pocket in the back and took my iPod. I bet they thought it was a phone so I can take a little solace in knowing that they probably can’t get any money for an iPod.

I felt like an idiot later for putting my bag up there. I just thought I was keeping a good eye on it and I never saw anyone touch it. The dude must have been a pro. We can’t even figure out if it happened on the first bus of second bus. Lesson learned anyway: always keep your bags on your lap.