El Salvador – Because we had to meet my sister, Rose, in Roatan, we only had a week to explore El Salvador. We thought it would be enough time to get a sense of the country considering it was small, and not very many tourists seemed to travel there. Heck, Lonely Planet doesn’t even make an El Salvador guide book – so we had to settle for an electronic copy of the El Salvador chapter from their Central American guide (not very handy when you need a map in the middle of downtown). 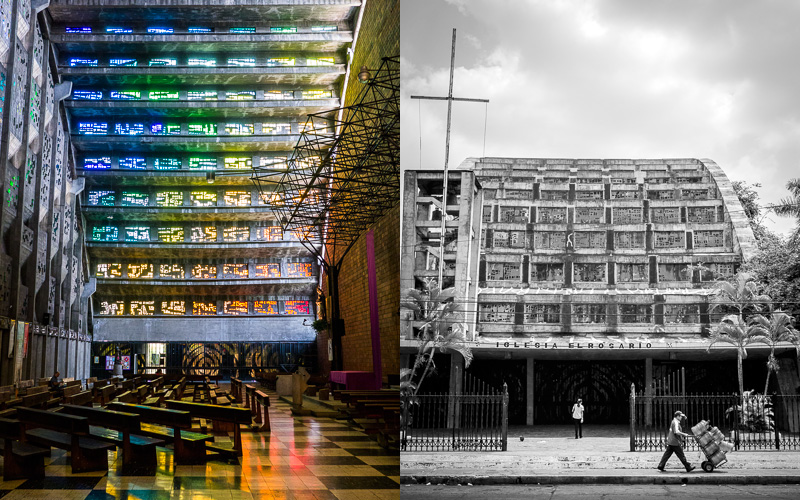 When we arrived at the bus station at 5:30am in Guatemala City planning on catching the 6am bus to San Salvador we were told that there was only one ticket left and that the next bus didn’t leave until 2pm. We really wanted to get on that early bus – the thought of spending eight more hours in Guatemala City and then arriving in San Salvador at night was highly unappealing. The sales clerk took pity on us, I guess, and told us to “just wait and see – maybe there will be tickets.” Sure enough, 10 minutes later, we were forking over the cash and boarding the bus. We even got to sit together. 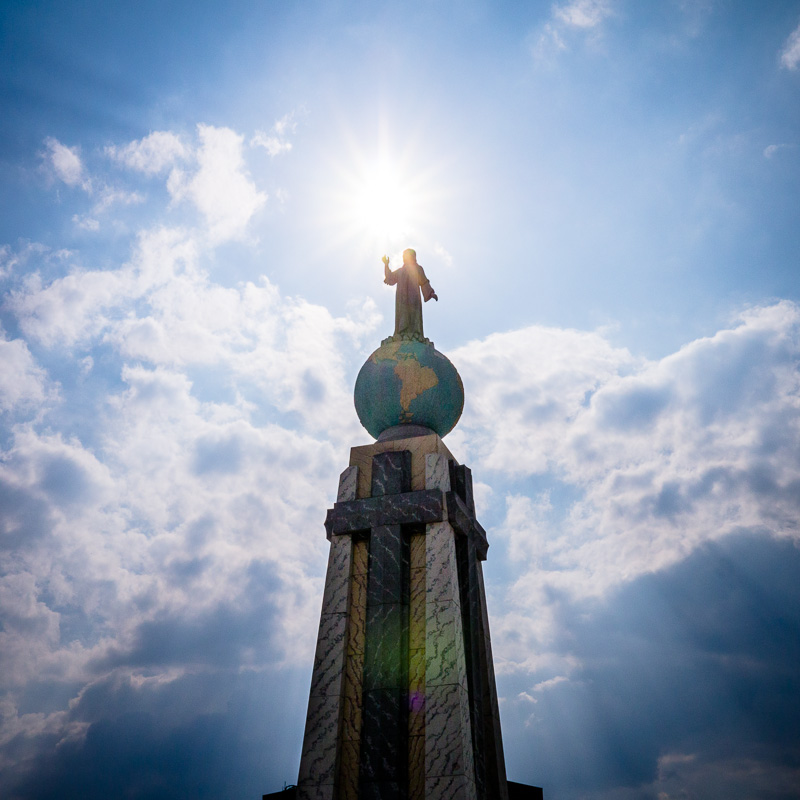 Crossing the boarder from Guatemala to El Salvador was fairly easy. We got off the bus on the Guatemala side, had our passports stamped, and then got back on and drove to the El Salvador side. In El Salvador we were told to stay on the bus while immigration officials came on and checked our passports while the dogs sniffed our luggage below. If only all boarder crossings could be this easy!

When we arrived in San Salvador we were told that there would be two bus stops within the city. Having no idea which was the better stop (and no guide book with a map) we just decided to get off at the second stop. We took an $8 taxi ride to our hotel – the official currency of El Salvador is the US dollar – and realized that our hotel was just blocks from the first stop the bus had made. Oh well. 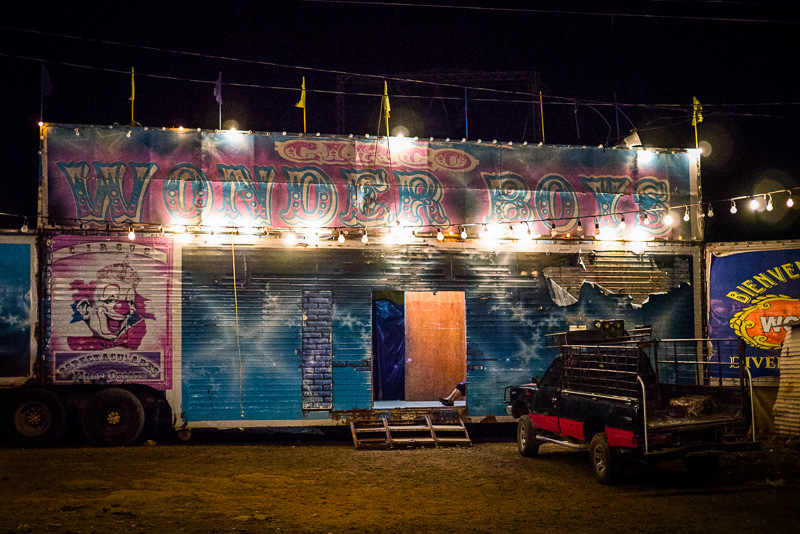 San Salvador is what you’s expect of a Central American capital city: big, busy, not much in the way of charm, and a little sketchy. lt’s all walled in with barbed wire and security cameras – and chock full of American fast food chains. We weren’t in the country for more than an hour when we ventured out of our hostel in search of pupusas when we saw a truck full of construction workers drive by and two of the guys were beating the pulp out of each other. We couldn’t  help but wonder why the heck we came to this country. But once we got to exploring we soon realized how great El Salvador was. 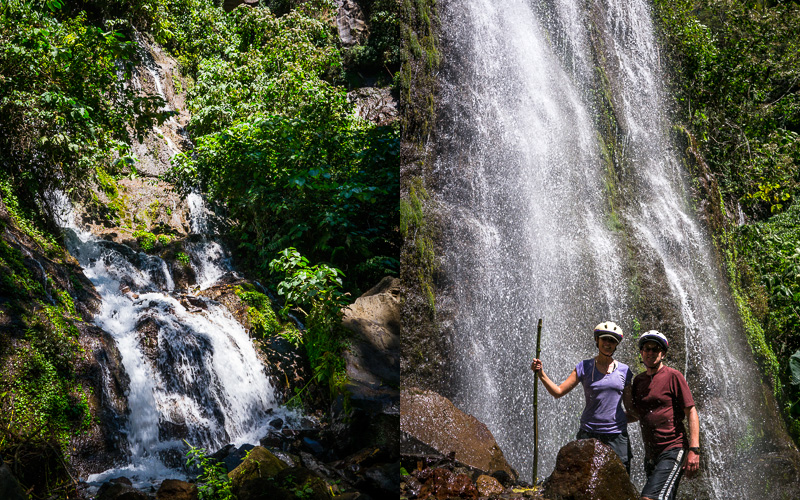 The hike to the waterfalls.

The first thing we noticed was how helpful and nice people were. As we explored the churches and museums of San Salvador people gave us big smiles and leaned out bus windows to give us directions. Hardly anyone spoke English and I was grateful for the little Spanish we had picked up thus far. El Salvador doesn’t get a lot of tourists so locals are happy to see you, happy that you took the effort to visit their country and didn’t let stories of crime or their recent tumultuous past scare you away. It was a nice change from Guatemala where the locals are used to tourists and used to the money they try to get you to spend.

After checking out a couple cool churches in the town center we visited the Museo de Arte El Salvador, a small contemporary art museum that was surprisingly good. They had an interesting costume exhibit as well as a collection of Warhols. They gave us 3-D glasses to wear for the Warhol exhibit, and woa – that was “far out”. Pretty groovy with the 3-D glasses. Like they were painted intentionally to be viewed with 3-D glasses. Were they?

After our day in San Salvador we headed to the town of Juayúa on the Ruta de Las Flores. Juayúa is a cute town known for its weekend food festival and we found a nice little hotel that had just what we needed – a chilled out vibe and hammocks. Stuart was super excited that the circus was in town. We asked the owner of our hotel about it – and he warned us that it wouldn’t be anything too impressive, but Stuart was set on going. I guess he had just watched a documentary about a travelling circus family in Mexico and wanted to check out the real thing. 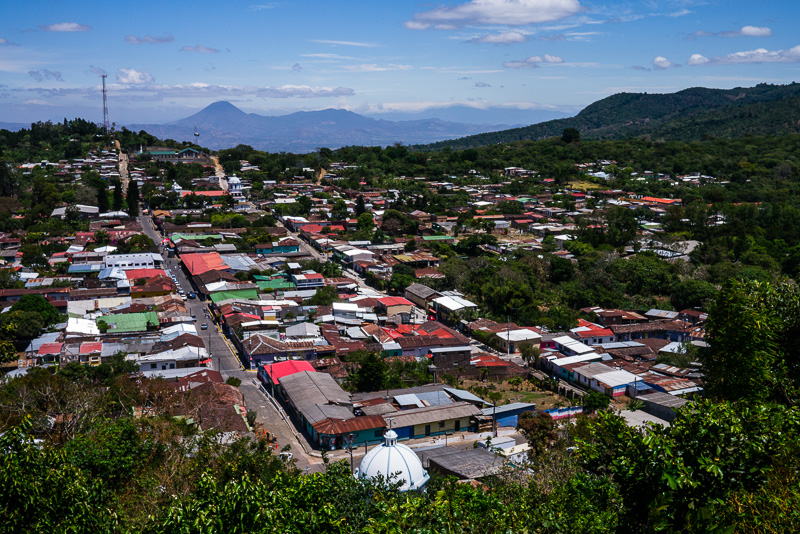 Ataco from the mirador.

We stopped by earlier at were told it started at 8pm, and of course we gringos showed up promptly at 10 till so we could buy tickets and get seats. We were the only people there.

It was a decent sized tent with rows and rows of empty wooded bleachers – we were the only people there. We asked again what time it started and were told 8:30pm. Other people started to show up around 8:45pm and the show started around 9pm. We were glad that we weren’t the only people in the audience but with about 20 people it was still super awkward. 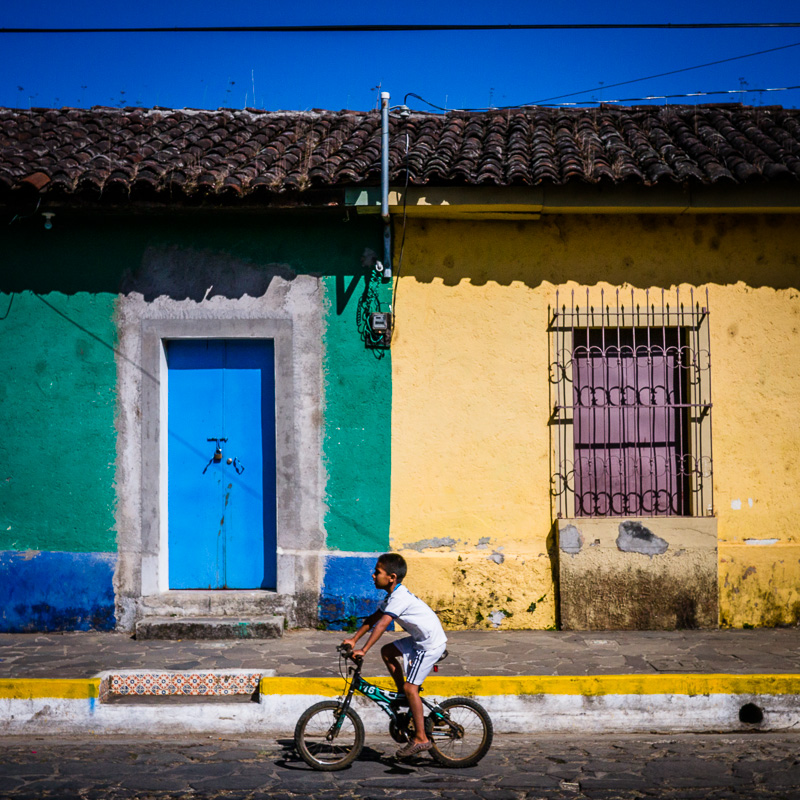 The show was pretty much what we expected – or maybe worse. There were clowns, long skits that we didn’t understand (they were in Spanish), 3rd rate acrobatics, a singer and scantily clad girls doing dance routines. The most entertaining act was a clown with a small booze barrel that he tried to get audience members to take shots from (he got no takers, but some funny participants played along well – throwing the drinks over their shoulders). Then a dog popped out of the barrel and ran offstage. During the show the wind picked up and we were sure the tent would be ripped up and we’d be whisked off to Kansas with that dog. 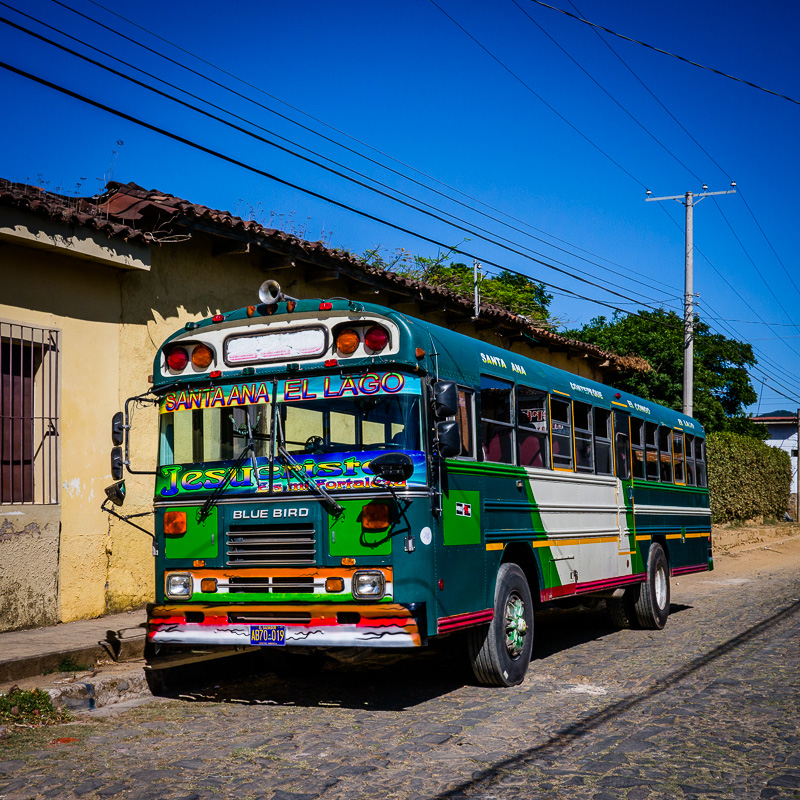 The next day we did a really cool hike from Juayua though the nearby forrest and waterfalls. Our guide didn’t speak English, but we knew enough Spanish to appreciate his explanations about the local flora and fauna. We probably understood about 70% of what he was saying.

As we walked we could hear the waterfalls, the strong wind and the cicadas which had come out for seven days. It was quite the cacophony of sounds. We tried really hard not to get our hiking shoes wet as we crossed back and fourth across the river when suddenly we were looking down a waterfall with helmets and harnesses and our guide was telling us to repel down the middle of the fall. It was about 50 feet down to the bottom and I was a little scared, but it was actually really fun. At the end of our hike we got to swim in the cool refreshing water of one of the falls. Nothing beats experiences like these. 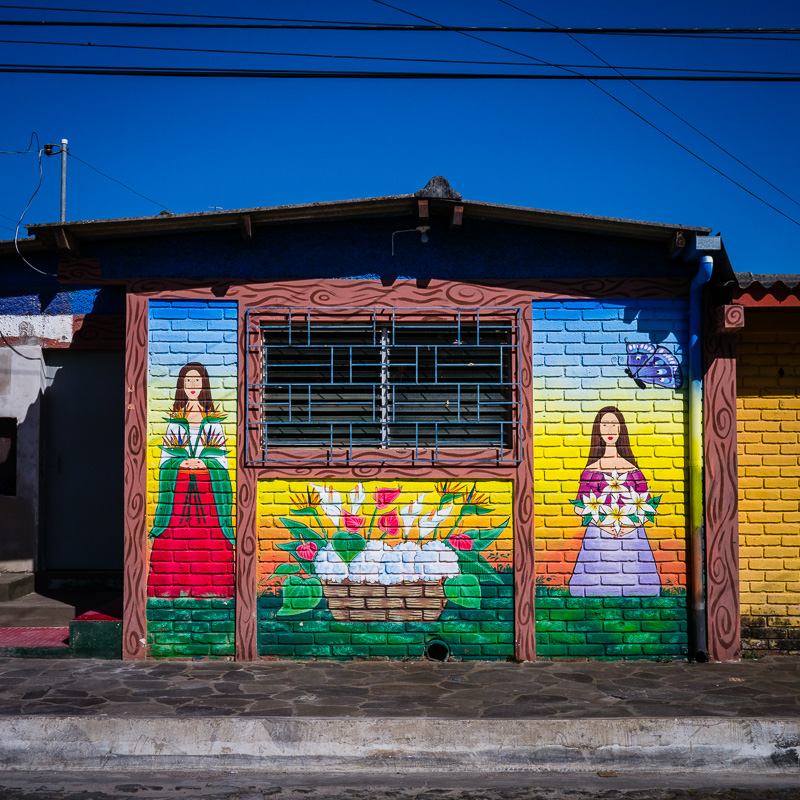 We took a bus the next morning to the nearby town of Ataco (pronounced exactly as it looks), that was even smaller than Juayúa. We had expensive sandwiches for lunch and chatted with a woman who lives in the Bay Area, and was visiting family in El Salvador. That’s the fun thing about traveling in Mexico and Central America, we meet a lot of people who live or lived in the Bay Area. There was also a nice mirador there with good views of the city and the surrounding hills.

We met some Korean guys in our hotel that were in town tasting coffee from the farms around town. They have been living in Panahchel in Guatemala and are opening a coffee shop there. It was really funny to hear one of the guys talk about his experience travelling through the States. At the time his English wasn’t good, but he spoke Spanish. He was being asked a lot of questions by the immigration officer that he didn’t understand, so he asked the officer if he could speak Spanish. He said the officer was blown away that an Asian guy could speak Spanish. But I’m not surprised. 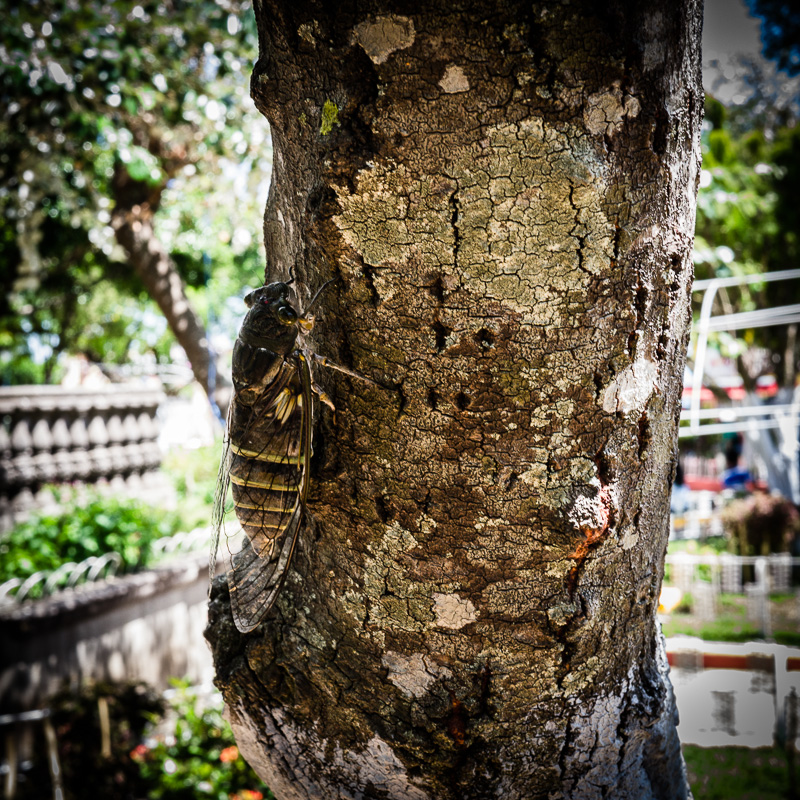 It was cicade season and these guys where everywhere. Even at the food festival.

The very beginning of the weekend food festival was starting our last day in Juayú before we had to head back to San Salvador. It was fun. The festival is touristy – but for local El Salvadorian tourists, not foreigners – and we enjoyed the fun atmosphere of the event along with some pretty good food. Then it was back to San Salvador for one more night before we had to catch the bus to Honduras and get to Roatan to meet up with my sister. We were sad to leave and really wish we had budgeted more time for El Salvador.