Gracias and Southeastern Honduras – Our next destination in Honduras was a town called Gracias. The name made for some interesting exchanges with the bus staff. We thanked the guy who loaded our bags into the luggage compartment, “Gracias!”, “Sí, tomar el autobús a Gracias”. When we got off the bus in Santa Rosa de Copan we thanked the bus driver, “Gracias”. “Sí, el bus de Gracias está allí.”

Gracias is a medium sized town with some charm and a couple nearby attractions – just enough to do to make it worth the visit, but quiet enough that we didn’t feel guilty spending some time there just relaxing in hammocks and reading. It was starting to get hot enough that we had to implement the afternoon siesta – the heat of the day just made it too hard to be really active. 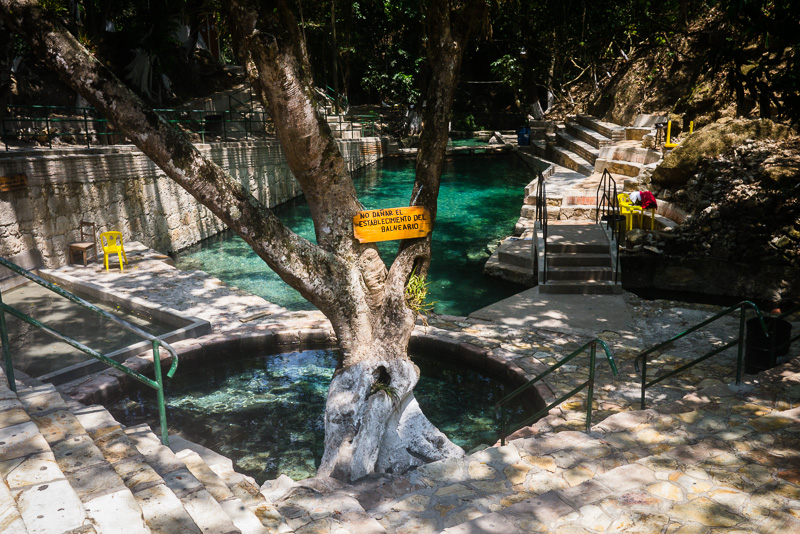 We took some time exploring the town, which didn’t take much time. There a re a few nice churches and a town square. There is also a botanical garden that seemed cool, but it was never open – which was ok because the heat was starting to brown everything over anyway. There was a really cool shop in town that sells pickles and jams beautifully presented in glass jars. We really wanted to buy some, but we just couldn’t see ourselves carrying the jars around for two more months.

Outside of town we visited some nice hot springs. Very nice water in a forest setting made for a really nice day. Even though it was hot, there was enough shade to make it enjoyable and the cost of the springs are a fraction of what people pay for similar things in Costa Rica.

We had met a couple at the D&D who work as teachers in Gracias and we got together with them one evening at our hotel and had some nice chats. We get lonely on the road, so it’s nice to just sit with some people and socialize. This couple works at one of the two English language schools in Gracias. I found it quite interesting that a town that size had two English schools – we didn’t quiete figure out why.

After Gracias we decided that it was time to move on, and we planned a three day trip to travel to Nicaragua. The plan was to go from Gracias to Comayagua, spend a day there, then to San Marcos de Colon overnight and then on to Somoto in Nicaragua. It didn’t quite work out that way, of course. 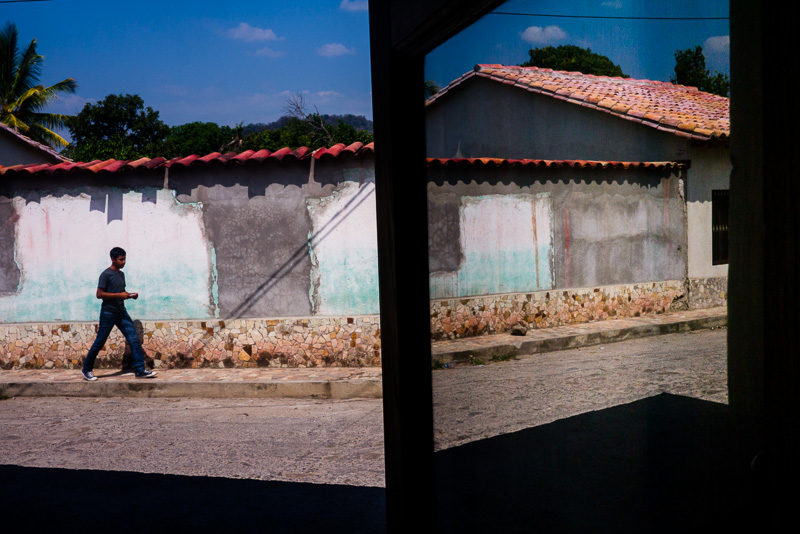 We took a bus from Gracias to La Esperanza and from there we took a bus headed toward Tegucigulpa and got off in Comayauga around 2pm. We thought we might spent a day or two there, but after arriving we realized that half a day would be plenty. The town was fairly big and didn’t seem to interesting. We had ice cream, visited a church and the town square and a plaza all by 3pm. The most interesting thing we saw was a bunch of guys practicing on stilts in the town square.  But it was still nice to see a “real” city that wasn’t overrun by tourists or gangsters.

We had a really nice dinner at a restaurant on the square. It was a “typical” Honduran plate with a fried egg, salsa, beans, cheese, crema, plantains and tortillas. While it wasn’t fancy it was really good, simple food and renewed our taste for Latin food for the moment. Eating on the square also made for some really good people watching.

In the morning we scrapped our plan to go to San Marcos de Colon and instead headed for Tegucigalpa (another top five most dangerous city). I was still experiencing quite a bit of pain and I wanted to see another doctor. With the help of a nice woman on our bus, we got a taxi to a hotel near the hospital where we got a room and then went to the hospital.

I managed again to get an appointment pretty quickly with an English speaking doctor. The doctor wasn’t too concerned and after a brief exam diagnosed the pain as inflammation and sent  me away with a prescription for Aleve. Meanwhile, Stuart amused himself in the lobby teasing a fish in a tank that would try and attack if you put your face too close to the glass.

We had pretty much an entire day to kill in the capital and again we were scared off by warnings of danger, so again we headed to the mall. We had lunch and dinner there and saw the latest Tom Cruise movie (pretty much the only movie playing in English).

Nothing transports you back home like watching a movie in English in the theater. For a moment after it was over I thought we’d be walking out into the streets of Alameda (okay, I kind of wished it was so). Our visit to the mall wasn’t a total cultural bust, we did have an interesting conversation with  a guy who lived for a long time in the States and managed to get his citizenship by joining the army.

Back at the hotel we wanted to find out about the bus we needed to catch the next morning. One of the things we really wanted to do on this trip, but didn’t make the effort to really take the time to do, was to take Spanish lessons. We thought about doing them in Mexico, but we thought maybe we should wait until Guatemala where it would be cheaper. But our timeline never seemed to allow us the week we would need, so now, over halfway through our trip we hadn’t taken lessons and we weren’t sure they’d be worth it anymore.

We learned some Spanish and certainly knew a lot more than those first days in Chihuahua when we couldn’t read menus, didn’t know any numbers past 10 and could barely ask for a hotel room. So, Stuart asked the woman at the front desk in his best Spanish, “Autobus de San Marcos de Colon?”. Not a grammatically perfect sentence, but it should get the point across. Well, it didn’t.  She promptly replied, “I don’t speaking English.” They went back and forth a couple times, but she just kept telling Stuart that she didn’t speak English. I jumped in and asked “Esta una autobus de San Marcos de Colon?” I know that isn’t even the proper way to ask that, but at least she recognized that I was speaking Spanish and she was able to give us some information on the bus.

In the morning we took a taxi to the bus station and got a 7am bus to San Marcos de Colon, which took about 4 1/2 hours. When we got there a bunch of taxi drivers told us that we had to take a taxi to the boarder, that there was no other way, but we were pretty sure they were lying – you can’t trust people in boarder towns. We headed down the block to the collectivo, which was much cheaper than the taxi. We had to wait a while for it to leave, but we didn’t mind – we really didn’t want to give the taxis guys our money after they lied to us anyway.

Once we got going it took about 30 minutes to get to the boarder. On the Honduras side it was pretty straight forward, we each paid $3 to exit and had our passports stamped. The Nicaragua side turned out to be the most confusing crossings we had ever done. There were no signs or staff to direct people. There were two lines outside the building and we had to ask the people in line which one was to exit Nicaragua and which was to enter.

After we got our passports stamped and paid the incredible $12 each to enter, we were directed to some ambiguous other station – we assumed the customs station. We went to one window and the said we had to go to another – we walked around a bit trying to figure out exactly what we were supposed to be doing. Then a Tica bus full of tourists showed up and formed a big line for customs, so we got in that – but it was just more chaos. We got out of line and finally filled out the right paperwork and had our bags searched and were on our way to Nicaragua. Once through the hectic boarder we took a short taxi to the town of Somoto – ready for our next country.