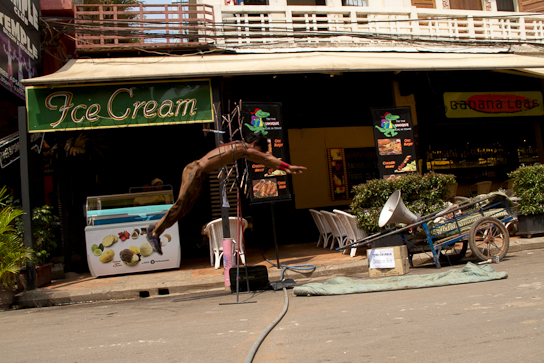 A street performer jumps through a hoop of knives on Bar Street.

Siem Reap, Cambodia – There are two highlights to being in Siem Reap: the Angkor temples and the food. And I’m not talking about Khmer food. Because this is such a touristy place, it’s filled with what they consider to be Western food: Indian, pasta, hamburgers, pizza and even Mexican. Because we had been eating Asian food for almost every meal for about four months, we decided to only eat Western food as much as we could.  Needless to say, Tina and I had tacos every day we where there. Literally. 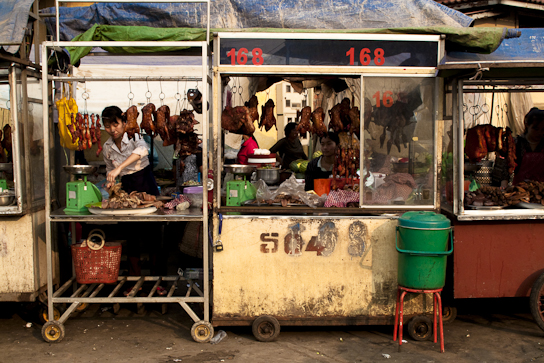 Since we were meeting our friends, Hollie and Bridget, in a few days, we decided to save the main temples and see some of the sights farther out of town. We also wanted to see Prasat Preah Vihear – a mountain-top temple sitting on the Cambodian/Thai border. 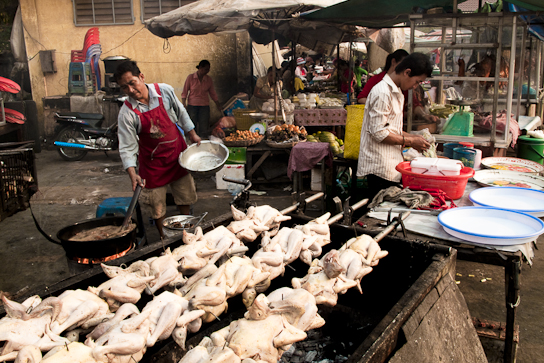 From the Thai side, there is a paved road that goes right up to the temple. From the Cambodia side, it’s almost the opposite. And there was very little information about how to get there other than making your way down these horribly bad dirt roads via motorbike, pickups or any other form of transportation that happens to be going anywhere near the temple. 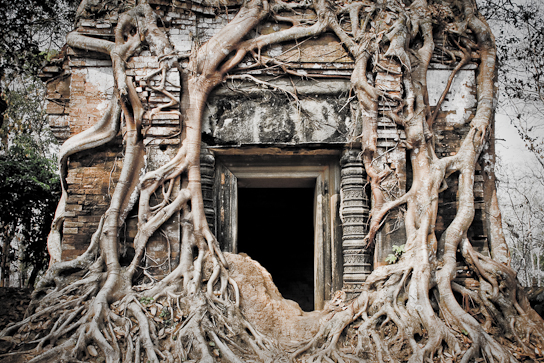 Trees having their way with Prasat (“sacred”) Bram, Koh Ker.

We set out to find out more information about getting to the temple. A few tour operators in town said they would take us in a private taxi for several hundred dollars. Ridiculous. So we kept looking. 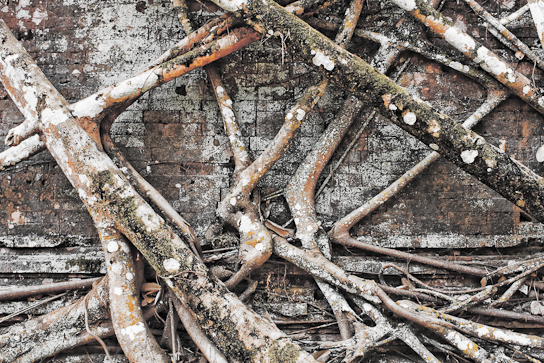 A city guide we picked up at the Mexican place mentioned two tour operators that specialize in out of the way temples. The first company, Hidden Cambodia, was a small outfit that only did one tour at a time, and they had just left on a dirt bike tour down to Phnom Phen. The second place, Piece of Angkor Guesthouse, ran trips to some of the outer temples – specifically Koh Ker and Beng Mealea which we had hoped to see (so we booked the tour). 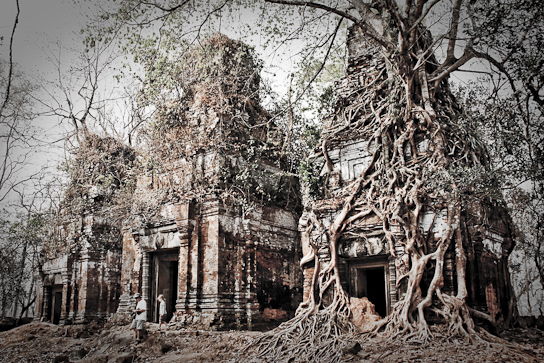 Three of the five towers of Prasat Bram, Koh ker.

They also had some good info for the Preah Vihear temple. Dave, the guy who runs the place, said the road to Anlong Veng, the biggest “town” between Siem Reap and the temple, had been paved. And once we were there, it should be possible to find someone going in the direction of the temple. And if not, we just take the bus back to Siem Reap.

The van for the tour picked us up at our hotel then made its way to the Piece of Angkor Guesthouse where we picked up the rest of the group: one couple from Palo Alto and another couple from San Diego (but currently living in Costa Rica) and their kids. This was the largest group of Americans we had been with since SFO. 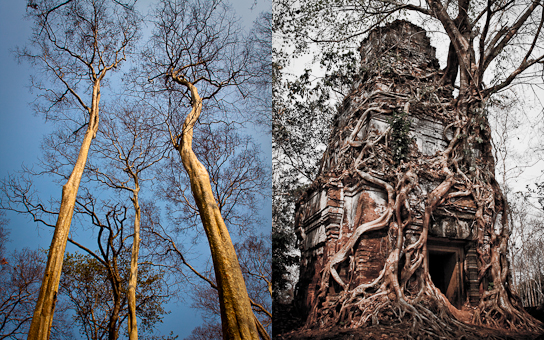 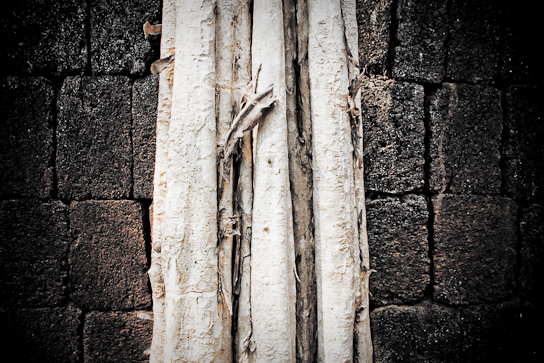 Tina and I sat in the first row of seats and kept to ourselves. Everything started off fine until in a span of three minutes they made fun of San Francisco, Florida and worst of all, Apple. I about lost it. 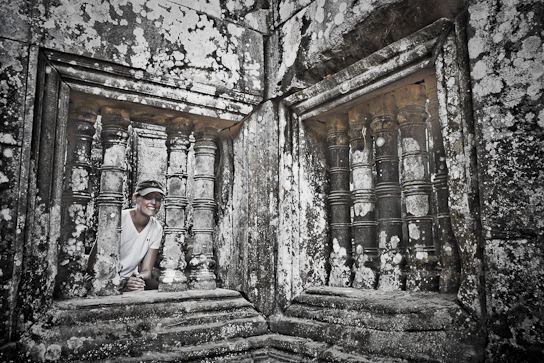 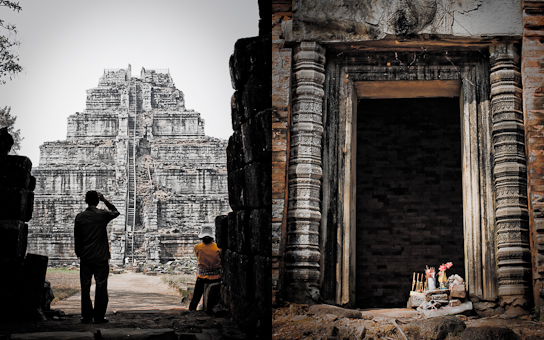 The temples of Koh Ker and Beng Mealea might be our favorite temples we visited. Because of the distance from Siem Reap, there were almost no other tourists there. Both temples had been swallowed up by the jungle and maintenance kept to a minimum. 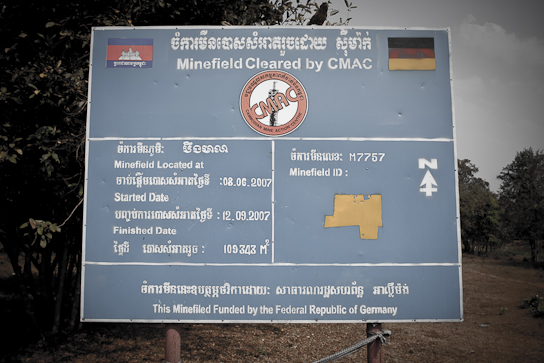 Cambodia has lots of signs marking where and who helped de-mine the land.

Koh Ker is actually an area of 42 major structures. We saw only a handful of them, which was plenty. There were a couple temples that had been almost completely smothered by trees as well as a huge pyramid-shaped temple. It was so refreshing how quite and natural the place was. We would later discover that the main Angkor complex has also been smothered – by tourists. 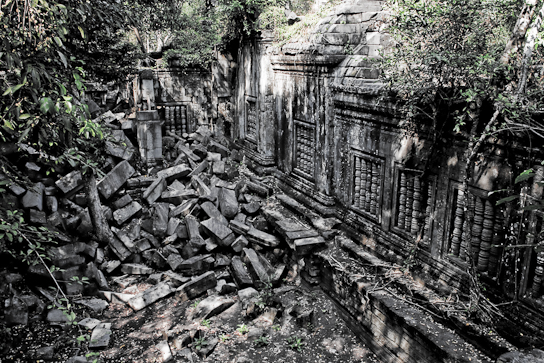 The ruins of Beng Mealea. 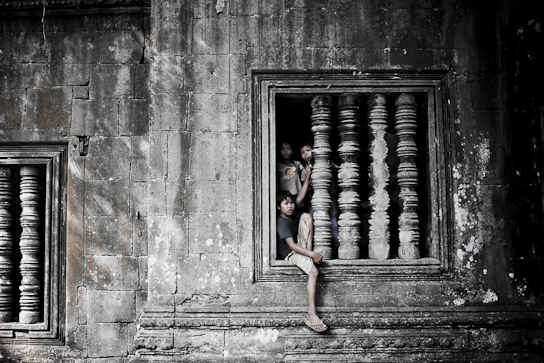 After Koh Ker, we made our way to Beng Mealea stopping at a street-side stall for lunch. I had my goto meal – fried noodles with veggies. Not only do I enjoy this dish, I’ve found it to be the perfect scorching hot day meal: it’s really light and just filling enough. Plus it’s hard to get wrong. 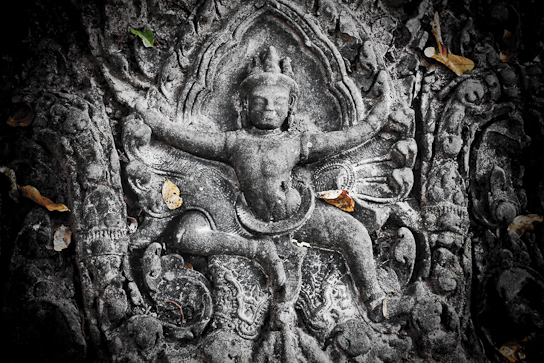 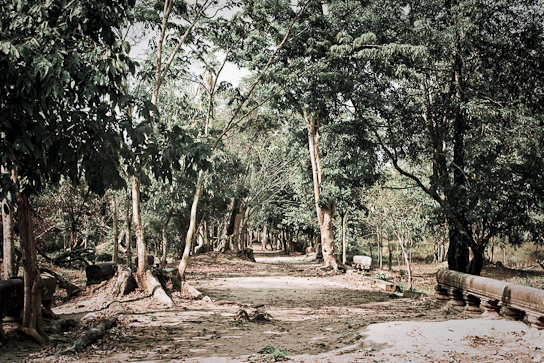 The old road leading to Beng Mealea and on to PraPreah Vihear.

Instead of a series of temples in various states of disrepair like Koh Ker, Beng Mealea was one complex that has been completely taken over by the jungle. A bit had been trimmed back in recent years, but the visit consists of climbing piles of stone and walking around wooden scaffolding built into a few still-standing walls. After spending a couple hours wandering around the temple, we all headed back to Siem Reap. Where Tina and I had more tacos.