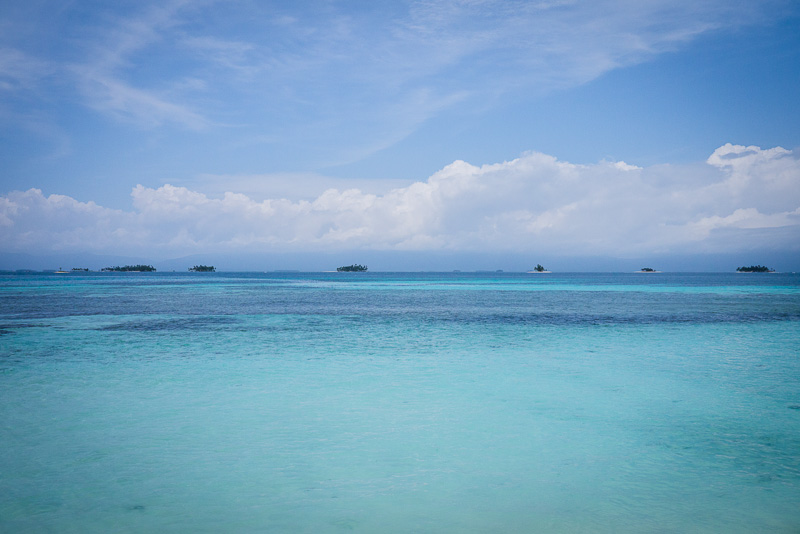 Looking across to other islands in the archipiélago.

After booking our trip through Luna’s Castle, we checked into another hostel with private rooms and spent the afternoon exploring the Casco Viejo neighborhood of Panama City. Casco Viejo is the “old city” that was all but abandoned for the new downtown, but in recent years it has gone through a major gentrification. Now it is an interesting mix of old, lower income apartments and hip, trendy restaurants and boutique hotels. It is a fun area to explore and hang out in and it has really good views of the “new city” and the mouth of the canal.

The next morning we had to be at Luna’s Castle at 5:30 for our pick-up for the San Blas Islands. Brutal. About a dozen of us piled in into Jeeps and headed out to Carti, the point of entry for the Kuna Yala . On the way we stopped first at the company’s office so we could pay and pick up some water and snacks at the nearby grocery store. We arrived in Carti at about 9:30 am and everyone was directed to the boat that would take them to their island. We ended up having to wait for our boat for about an hour and then eight of us – including this hilarious guy from Columbia – boarded the boat for Chichime Island. 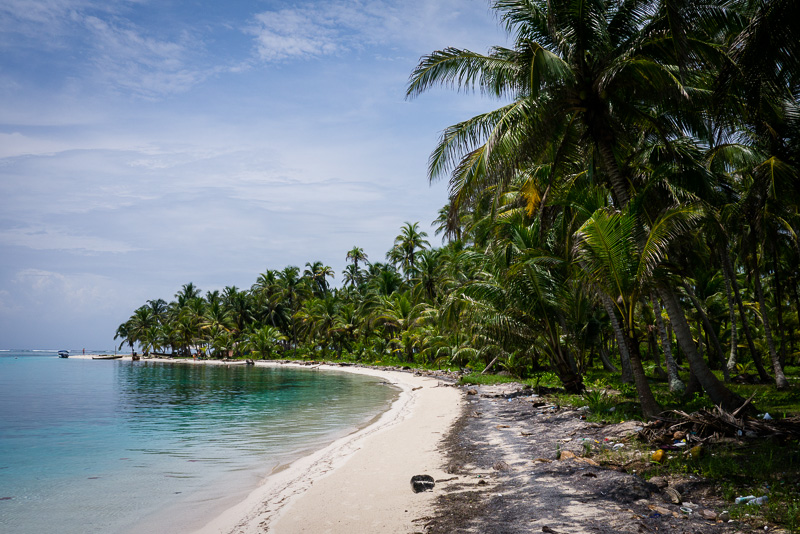 The “path” around the island.

The San Blas Islands are controlled by the indigenous Kuna people who have managed to keep both their traditional customs and the islands in their region unspoiled from development. They control all commerce and no foreigners (including Panamanians) are allowed to run business in their area – even the US Coast Guard is not allowed to patrol the waters. As a result, the archipelago is full of small, undeveloped beautiful islands and also rather expensive to visit.

We chose the Chichime Island because it was small, relatively inexpensive, and was supposed to have good snorkeling. We were not disappointed. When we got near the island we saw a white sandy beach, crystal clear water, palm tress, a couple huts and not much else. When we arrived there was one other couple on the island and the family that lives there and that was it. Ten tourists and a family – it felt like our own little paradise. 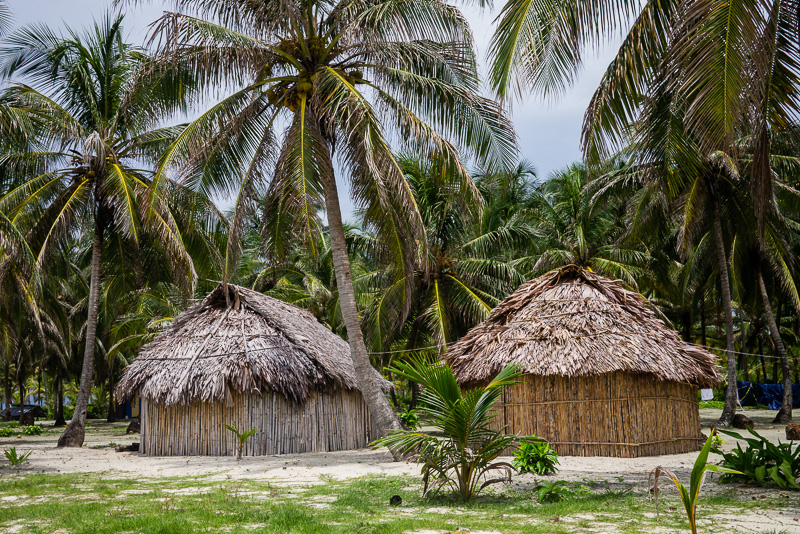 We slept in the hut on the right.

We were given a little orientation by our host. I was hopping that we could snag the private hut, but since we were barely following along with what our host was saying, we weren’t quick enough to respond when he asked who wanted a private and another couple got it. Oh well, it would make our stay there cheaper. We ended up sharing a hut with a sand floor with 4 other people. We had a choice between a bed or hammock and we managed to get the bed, which turned out to be a bad move because it was too hot and humid to be comfortable. The next night we switched to hammocks and we slept a lot better.

The island turned out to be a mix of great and not-so-great. We had a really good time talking with the people we were there with, with Stuart and the Colombian guy keeping us laughing for hours. Though the current around the island was a little strong the snorkeling was good and there were a couple of smaller islands we all swam out to. One was a tiny little island with one palm tree and a shipwreck – straight out of a Gary Larson cartoon (Side note: Gary Larson does a really good job keeping his cartoons off the internet). The water was warm and when the sun was out it was glorious. We could walk around the island in half an hour and see no one but a couple locals and a really friendly monkey. We even ran into the German couple we’d met in Bocas del Torro who stopped on the island during a multi-day cruise around the archipelago. 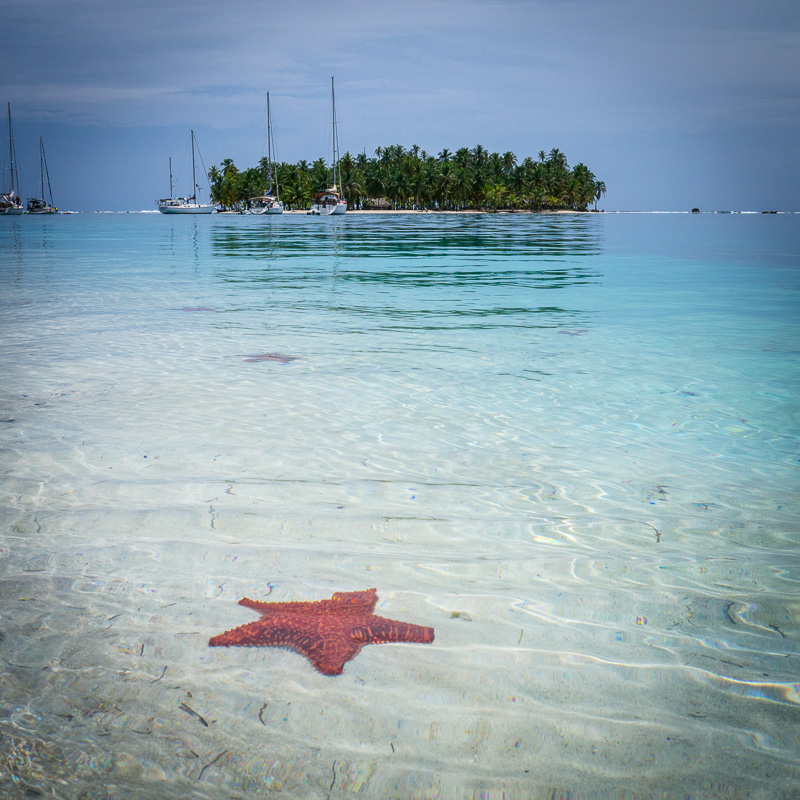 The island was surrounded by starfish. Yes, you can swim over to that other island.

On the down side it rained a lot. And the bugs were out of control. I got tons of mosquito and sand flea bites. We spent hours in the shelter of the dining area waiting out the rain. One evening we got stuck in the (cold water) shower for half an hour waiting for a downpour to stop! There were no hooks or anything in the shower, so our plan was that we’d take turns showering and standing outside the shower to hold stuff. Stuart was holding my clothes waiting outside when the downpour hit and he had to jump in the tiny stall with me to get shelter. The food, which was usually whatever the locals caught that day, was hit or miss. I also injured my toe pretty bad one night while playing game that required running around in the dark – I should have known better.

But, overall, we really enjoyed it – the downsides were just annoyances and definitely worth putting up with so we could enjoy the island. We decided to leave half a day early, departing on the afternoon of our third day instead of spending another night. We’d only miss out on a few daylight hours and we’d get to spend the night in a real bed in Panama City. Of course, the day we left was dry and sunny and it made our departure all the more difficult.