We’ve been in Moscow four days and I like it. Maybe more than St. Petersburg. A good analogy would be Florence and Rome. Like Florence, St. Petersburg is visually superior – and most of the culture is centrally located. But Moscow has that big city buzz – like Rome – and has history and culture around in little nooks. St. Petersburg had lots of beautiful people dressed up. Moscow has a bit more blue in the collar.

One of my litmus tests for big cities is the public transportation (SF being the biggest exception). Moscow’s Metro is the best in the world. It moves over nine million people a day – more then London and NYC combined – and has over 150 stops. You can get anywhere. And most of the stops are deep underground (the escalator ride usually takes about three minutes down to the platform) because they were used as air raid bunkers during The War. Some of the stops are really beautiful – stain glass windows, sculptures, mosaics. Oh, and the average wait time for a train, regardless of time of day, is about two minutes – and the trains are always full. The best part is that on some lines, the doors open and people start getting off before the train comes to a complete stop. 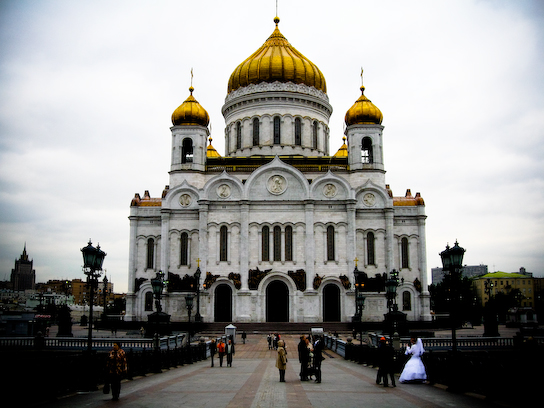 The Cathedral of Christ the Savior. Most impressive church in Moscow.

We’ve visited the Pushkin Fine Arts Museum (all three of them), some churches, the Red Square and the Kremlin. Red Square: kinda cool. Kremlin: kinda boring. In the Red Square there is Lenin’s Mausoleum which is awesome. His body has been preserved by, among other things, being dipped in wax every 18 months. You walk into this room which is really dark and he is just lying there with a light shining on him. Pretty creepy. The guards keep you moving and hush you if you’re talking. St. Basil’s was cool, but much smaller inside then expected. It’s also great that directly across from Lenin’s Mausoleum is a modern expensive shopping mall. 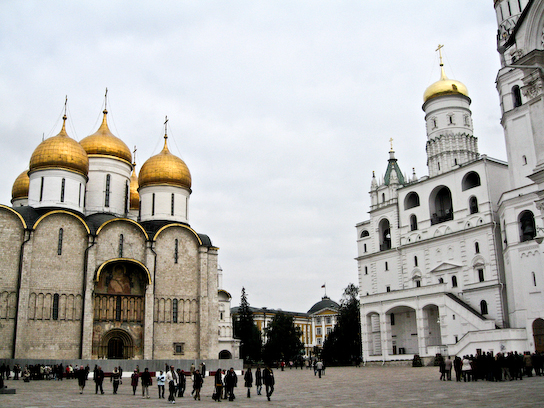 Assumption Cathedral and the Ivan the Great Bell Tower in the Kremlin.

The Kremiln was a disappointment. You wait in line for a while, and once inside you can only visit a few churches. Everything else is off limits with guards keeping you from going anywhere. There are cameras everywhere and a eery feeling like you are being watched. We haven’t made it to the Armory yet which I hear is kinda cool. I kept a good lookout for Putin. Didn’t see him. Although a limo arrived with a police escort and several unmarked cars.