I took a taxi to the train station at 6am hoping to get a ticket on a train that I hoped left a little after 7. I got there, found the ticket window and tried to get a ticket for soft seat, which is essentially 3rd class but was stuck with hard seat, which is 4th class. It’s also the cheapest. But since this ride was only around six hours, I didn’t care about being too comfy. Plus the ticket was less then $3. 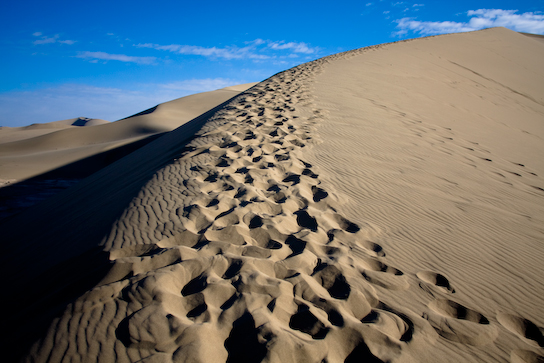 The well-traveled path to the highest dunes.

The double downside was that I wasn’t assigned a seat number, there was a long line and it was first come, first served. Fortunately, I got on a car with that wasn’t too full yet and a nice man waved me over to sit across from him. We ended up being the only people in our seats – which in 4th class is really a bench that can fit as may who may try to sit there.

The ride went well. The man and I had an understanding that when one of us got up, the other would look after the luggage. A few times some people came by trying to selling things like the hot water bladders or indestructible socks. While demoing the socks, the guy – who I think also worked for the train – would stab them with chopsticks and try to rip them. He would then put them over part of the luggage rack above the seats and hang from them. I wish I understood what he was saying because he seemed really funny and a great salesman. 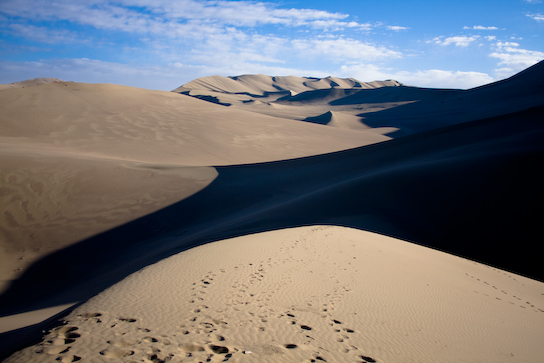 After arriving in Dunhuang, I got in a taxi and was once again taken to two wrong hotels before I just got out and walk away. I passed a hotel with an “Olympics Tourism 2008” banner so I took a chance they spoke a little English. I went inside and the only helpful info I got was what street we were on. From there I busted out my Boy Scout skills and got to the right hotel.

The guidebook suggested a couple places to eat that have tourist info – both of which were close to my hotel. I walked to Charley Johng’s Cafe, sat down, and noticed that they were watching something on the computer. Being a huge fan, I quickly realized they were halfway into the second season of Lost. Awesome. After they took my order I asked about the things I wanted to see in Dunhuang and about getting my ticket onwards to Turpan. The woman there suggested I go to the booking office and get it since they charged a large fee. After lunch, and bit of Lost, I headed to get my ticket. 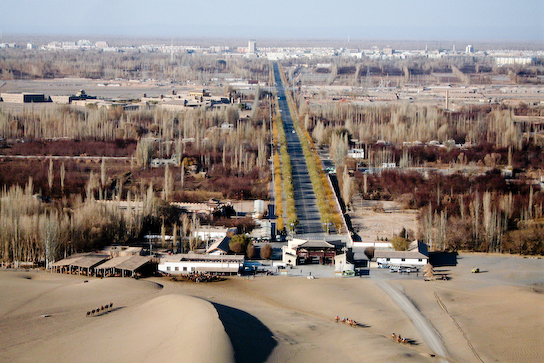 Looking down the road back towards the city. Skyline looks like Tallahassee.

There wasn’t a line so I walked up to the window and tried my best to communicate what I wanted. So far in China most people are patient and enjoy helping you figure things out. Sometimes they find it funny. The woman working behind the Plexiglas found this a riot. She would write things in Chinese and show them to me and laugh when I couldn’t read it. So I’d point to words in Tina’s phrasebook and she’d nod. Then laugh. 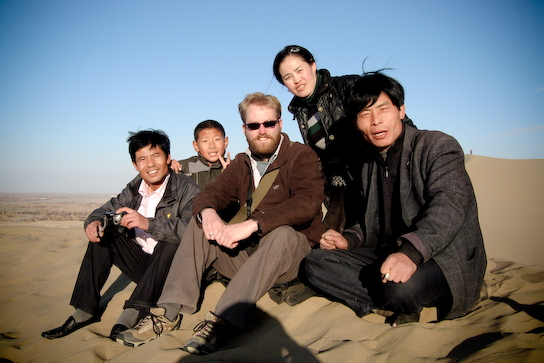 The Chinese family that wanted to hang out with me.

But when booking a ticket you can quickly get into territory that isn’t in the book – like times, train numbers, etc. At this point there were about 10 people crammed next to me getting in on the action. She would be saying things and someone would say an English word that would help – usually they would just laugh, tho. But after about 15 minutes, and the effort of all of us in the room, I walked out with a ticket. Buy the way, Americans are not the only people who repeat things louder hoping it helps. People in every country have done that. 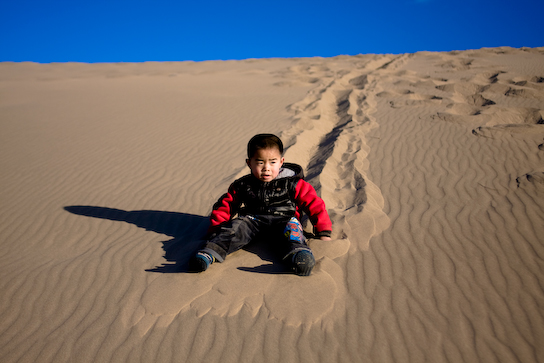 One of the highlights in Dunhuang are the huge dunes right outside of town. When I got there I started hiking up one of them to get a good view of them and the oasis at the base. After hiking for a couple hours – but not getting far – I ran into a Chinese family that wanted to take their picture with me. The uncle made me sit down with them as he smoked – I guess after hiking up some dunes you need a good tar boost to feel better – and tried to talk to me. Some of the kids new a bit of English, but not much. Even after about 30 minutes of laughing I not sure we ever really talked about the same thing. 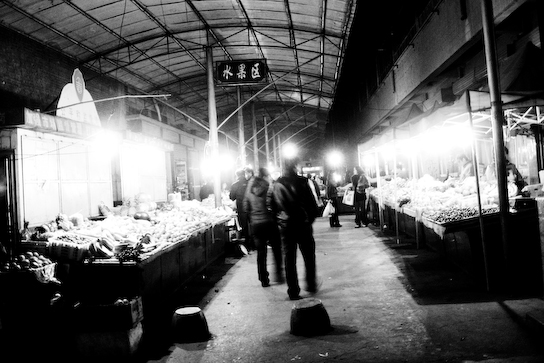 Entrance to the night market.

They insisted I join them for some tea, so we started hiking down and took their shuttle out of the dunes. At the entrance I went to look at some ATV’s and when I turned around they were gone. I was bummed at first but I had realized on the shuttle ride back that the uncle was kinda drunk so I didn’t know where the evening would end up going. My first clue that he was drunk should have been how clumsy he was on the dunes. My second clue should have been when he keep saying, “Bush, good”!

So I hopped the bus back to my hotel, stopping to get some snacks until dinner time. I got these crackers that were called 3+2 and had a Chinese boy band on the wrapper. Each one was a Ritz (the snacks, not the boy band members), but thinner and sweeter, with chocolate and vanilla between them. Fantastic. I ate the whole back before getting to my room. 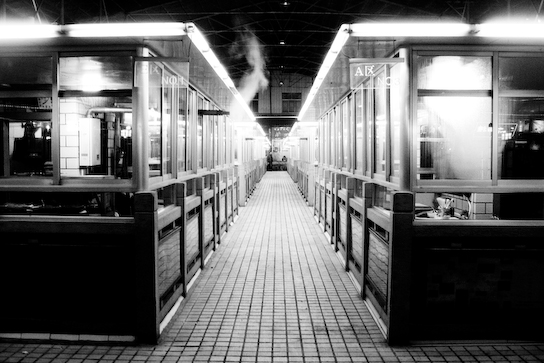 There was a section of little restaurants.

Wanting to hit up the night market for dinner, I killed some time watching TV before it was time to go out. When you turned the TV on or off, the pictured opened or closed like a curtain and the volume display was a row of flowers with a butterfly that would move as you turned it up or down. And this being China, there wasn’t much I could understand. But I did find a show that was a bunch of James Bond highlights, coupled with travel information about where the action scene took place. There was also a segment all about his various watches. I feel bad for Pierce Brosnan. He could have made a good Bond, but man did his movies stink.

Once the Bond show was over, I headed to the night market for dinner. The food stalls were few and far between, with most stalls dedicated to tourist trinkets. And the food stalls I saw had stuff I didn’t recognize or want, like fish (do not eat fish in China) or a sheep’s head cooking with what was already in a pan. Now, I am willing to try most things once, but I have to know whatever it is I’m trying. And something I’ve learned is that “Yes” is all too common of an answer – even when it isn’t the right one. So at food stalls, I try not to mention the food, but wait until they do. Because you can ask if something is “chicken”, even when it clearly isn’t, and they will say “yes”. 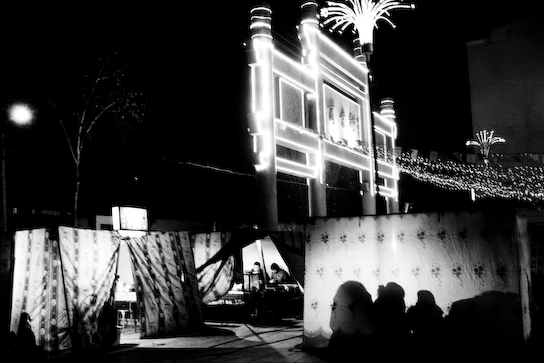 It was cold enough to have the stalls and seats in little tents.

I found someone who was cooking naan so I figured that would be a safe bet (Dunhuang is known for it’s donkey meat). He sliced the naan into five strips, cooked it over the open flames, coated it with oil, cooked it some more then put chili mixture over it. He invited me to sit at the little table next to his stall and he and what looked like his kids (chefs-in-training) got a big kick out of me being there. I made such a big deal about how good it was that he gave me some tea and even some money back. I tried to refuse the money, but he was pretty adamant and he shut me up by pouring some more tea.