After a long overnight train from Beijing, I arrived in Jiayuguan – where the Wall ends at a fort in the desert. I got in quite late at night and took a taxi to my hotel. Well, we eventually got there. 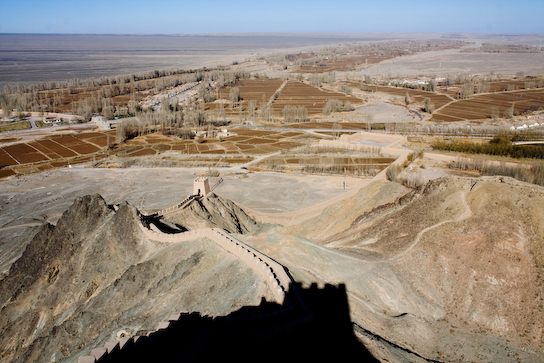 Looking down from the Overhanging Wall

Something I’ve learned about taxi drivers here is that when you point to the address in your guidebook, one that you have written down, they always say they know the place or at least understand the address. Basically they just want you to get in the car. Then they drive you to some hotel and let you out. When you ask if this is the right place it gets awkward and they look at the address – for what I think is actually the first time – and get all confused even though the book has both the Chinese characters and the pinyin. This has led me to my other theory – taxi cab drivers don’t know how to read. Nor do they have to have any knowledge about the layout of the city. 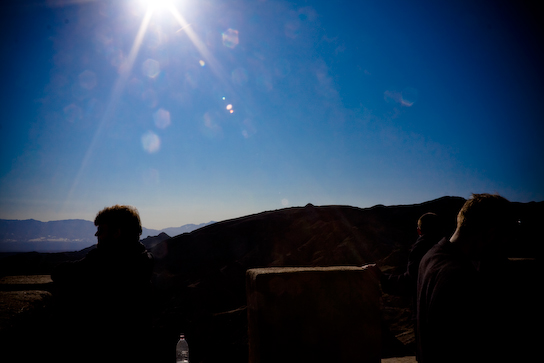 The next day I got up and planned to spend most of the day exploring the fort, hopefully getting out there by bike. So I walked around the city for a bit trying to find anything I could about renting bikes and getting to the fort. I knew I could take a cab or minibus, but I wanted to bike. Seemed more adventurous or something. 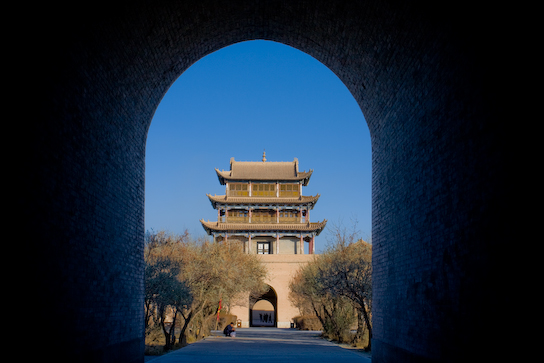 One of the towers of the fort seen from one of the gates.

Eventually I got to a hotel that is supposed to rent bikes. But this being the off-season, a lot of tourist stuff is closed – like bike rentals for instance. But while I was “talking” to the people behind the counter, I notice a dude walk by who looked western. So after my conversation went nowhere, I walked outside and saw him. Turns out not only did he speak English, but he WAS English! 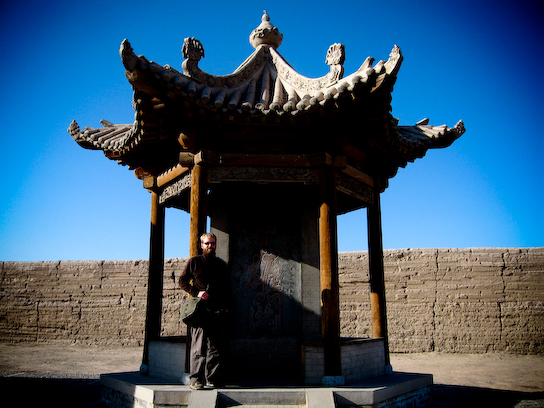 This monument declares "First and Greatest Pass Under Heaven", another name for the fort.

We hit it off right away. Richard was pretty funny and had a mustache like that guy from Office Space that he was growing for a charity fundraiser.Totally awesome. He invited me along with his two Scottish buddies, Brian and Graeme to share a cab for the day and see the sights. The best part, tho, was that Graeme was near-fluent in Chinese. So we stopped by a little place for lunch and he ordered, then later he negotiated a good rate for the cab and made sure we were doing what we wanted. He kinda became our tour guide. 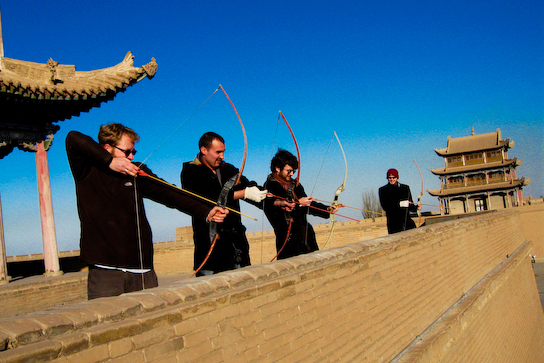 At my signal, unleash hell. Me, Richard, Brian, Graeme.

The first stop was called the Overhanging Great Wall, which are two sections of the wall that have been restored that goes up two sides of a ridge overlooking the pass between them. The view of the fort and the mountains in the distance was cool, but nowhere as great as the surroundings of the Wall outside Beijing. One section had been restored in the ’80’s, and the other in 2001, so it felt too new to be taken seriously. Plus not much looks good from the ’80’s anyway. 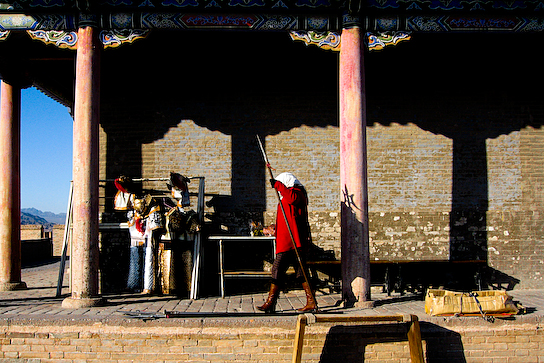 You would also play medieval dress up.

The fort has also been restored a few times and is pretty touristy. There were shops inside and even places where you could stand atop the wall and shoot arrows down at targets shaped like people. Yes, we did this. Twice. I think it’s going to be a common experience in China that historical places have been restored to the point of not feeling historic. I guess that’s true in most countries, but I think there is a difference between restoring and rebuilding. In Europe they have restored churches but they still feel “old”. Like the sections of the wall, the fort felt too new. But the design and layout were great, and some of the towers called back to ancient times when China considered this the end of the “civilized world”. 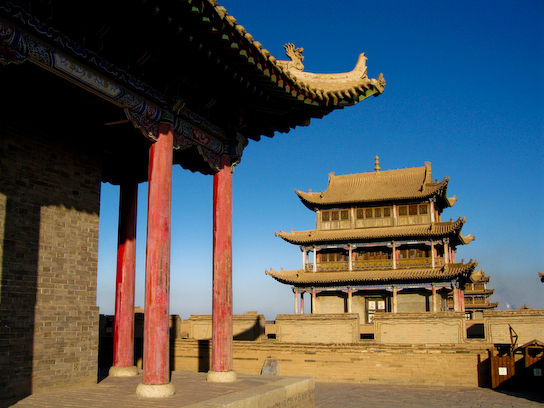 The fort had some cool architecture.

After walking around the fort walls and courtyards our driver took us to this place where the Wall literally ends at a canyon with a river going through it. There is now a zipline you can take to cross the canyon where there is this gladiator-training camp or something. Maybe some summer camp for warriors-in-training. The driver took us to a foot bridge where we could cross over the river and see the end of the Wall from the other side. 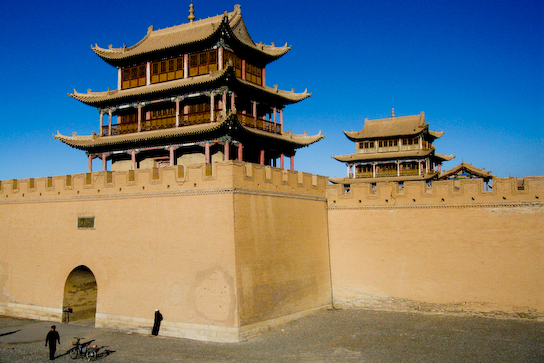 Outside the fort, near the people offering camel rides.

With the sun behind the mountains we headed back to Jiayuguan for dinner. Again, Graeme, who could read the menu, helped us all order. We got a ton of food – chicken, spring rolls with some blueberry dough filling, potato slices in spices, snow peas in some really good sauce, tofu, and some beef with hot peppers. Then we headed back to their hotel and hung out until they left for the train station, giving me a lift back to my dumpy hotel.