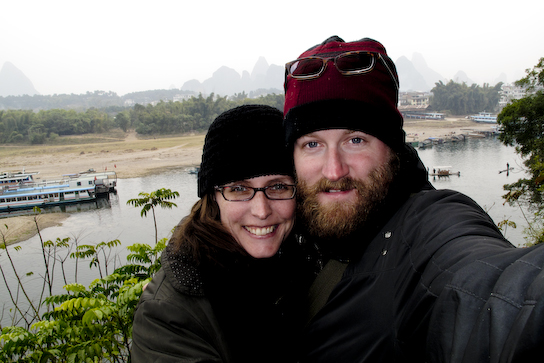 Overlooking the Li River. No, I am not on drugs.

After getting off the bus in Yangshuo, a man came up offering to take us to his hotel. We explained that we had already booked a room somewhere else, but he insisted on following us out of the bus station anyway. We got out the map and tried to figure out where we were. He looked at the map and said we were at another station – that was off the map – and that his hotel was right down the block. Even after the experience in Guilin, I still doubted him so I walked down the road about 10 meters and saw a street sign – we were on the right street just like the map said. Once I realized this, he receded back into the bus station to prey on someone else. 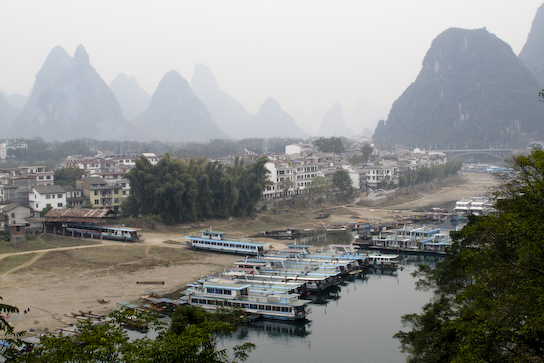 Yangshuo with the karst scenery all around. 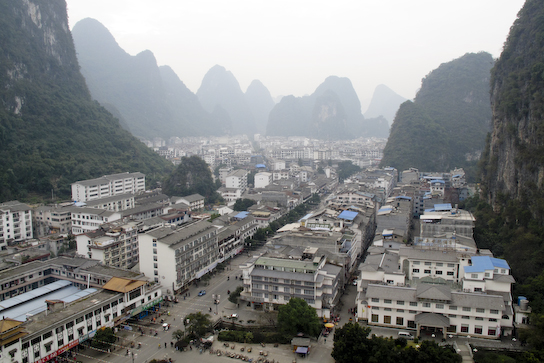 The main drag. Our hostel is near the bottom right.

There wasn’t much to do in the city proper – so we walked around a park on the Li River, then climbed up one of the limestone “hills” in the middle of town for a good aerial view of the city creeping up through the hills. On the top we met some French travelers – one of whom we think might have been on our train to Guilin. We talked about Russia and what a shame it was that the French government had outlawed the common practice of French people driving their old car down to Africa and selling it for a good profit.

That morning, we got up and headed out to the trail (which was really a country road) on our bikes. The first mile or so was through the city which was kinda hairy for Tina, but she made it just fine. Along the way we met a family from New Zealand, and since the road was poorly marked, we teamed up together – hoping that a few bad maps would be better then one – to find the Dragon Bridge, our destination for the ride. They had also befriended a Chinese couple from Beijing. So when we got really lost we’d ride with them and let them lead the way. 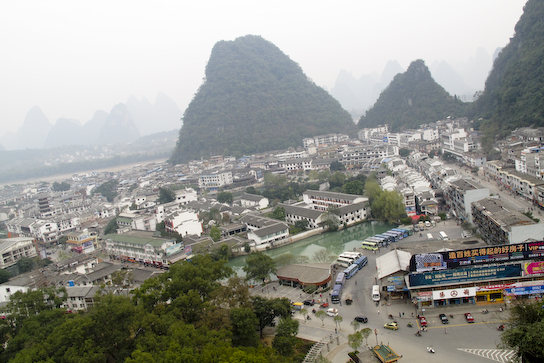 The town was built flowing like a river around the hills.

The trail led to a sort of parking area with some people offering bamboo boat rides. Not sure where to go, I showed a local my map and he motioned that we circle around the parking area and to follow a little dirt road. At this point the road turned into a little dirt road that would eventually connect a few villages that dotted the trail along the way. 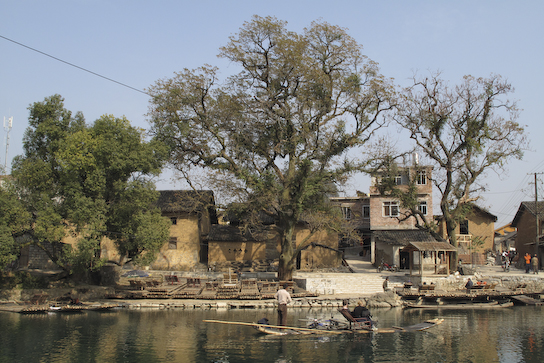 The village next to Dragon Bridge.

Once we got to the bridge, Tina and I found a shady spot along the river to eat lunch. The kiwi family, and the couple from Beijing joined us. The couple spoke a little English and told us they were TV journalists and were in Yangshuo working on a story. Turns out they were also staying in the same hostel we were. 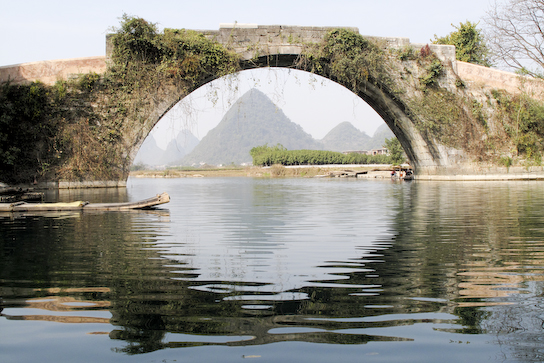 After a lazy lunch we got back on the bikes and decided to ride back on the other side of the river – making a loop for part of the trip – like a lollipop if you will – which ended up giving us a completely different experience. The trail getting to the bridge was a wide dirt trail, whereas the trail going back on the other side of the river narrowed and became the path between rice fields – rocky paths maybe two feet wide at the most. At some points the trail was so narrow that it was hard to keep the bikes on them and Tina and one of the kiwi kids fell off the trail into the rice patty.  On either side of us where farmers tending their crops, taking their buffalo’s for a walk or just patches of wild farmland.

The next morning we got up early to make calls home for Christmas. This turned out to be one of the weirdest days of our trip. After finally finding a place with phones to use, we ended up taking for way longer then planned so when we had to pay, we didn’t have enough money. So I gave Tina some money to exchange – since we have that wad of cash from my visa extension – and she started the long hike to the Bank of China, the only place in town to exchange money. 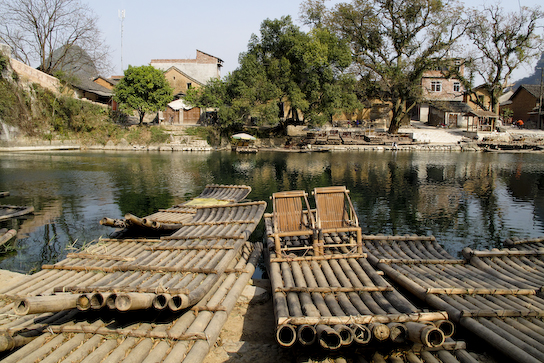 After about 25 minute of me sitting awkwardly in the phone place, Tina comes storming in and explains that you need a passport to change money and she had left hers in our hostel room. So we switched places and I took off for the bank. At the bank, I got in line and filled out the necessary paperwork and stood waiting for about 15 minutes. Once I got to the window and handed over the money to change, the cashier got all picky about my Benjamins and got out a counterfeit detector. One passed and one failed. I tried explaining that I’d gotten these from a bank in China, so if it was bad, it’s her fault. She said how does she know I was telling the truth. I was fuming. It was a good thing there was a wall of Plexiglas between us. I gave her another hundred that passed and got my money and ran back to the phone place and paid our bill – getting a more excited reaction from the employees then from Tina. 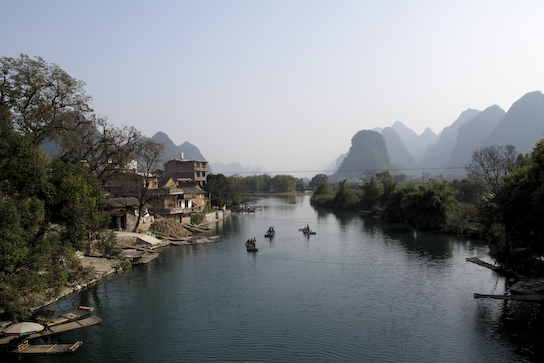 Looking south along the Yulong River.

It was pretty late in the day so we headed out to get some lunch. We went to a cafe that was recommended to us by a few people back in Guilin. They led us upstairs where there was only us and this older guy from England that we ended up talking with for a few hours. The food was good and it was cozy – thanks to the two coal burning stoves placed in the middle of the floor. 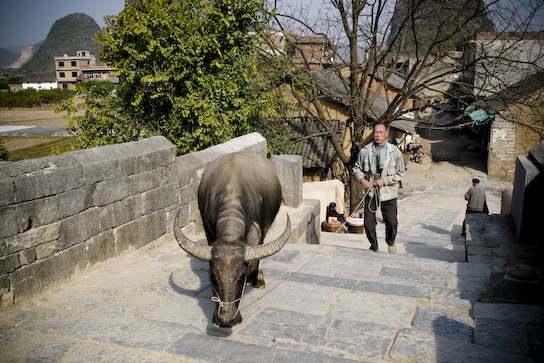 A water buffalo taking this owner for a walk over the bridge.

After we ate and were talking for a couple hours, I got really really sleepy and even had to stop my sentences midway to remember what I was talking about. Sometimes I felt like I fell asleep while talking. The same thing started happening to Tina, and even the other guy occasionally started forgetting what he was talking about. 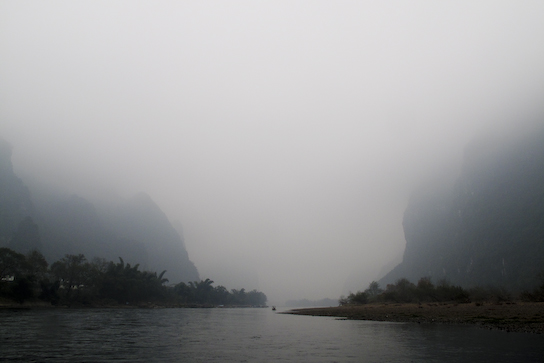 Along the Li River.

The conversation naturally wrapped up, so we paid and started walking to the hostel – and the guy we’d been talking to suddenly disappeared in the cafe someplace. Tina mentioned how dizzy she was I said I felt the same. And once we started walking home, it got a lot worse for both of us. We hardly managed to get to our room before Tina went into semi-hysterics about how we’d been drugged and we should tell people in the hostel and call the police and that we shouldn’t fall asleep. 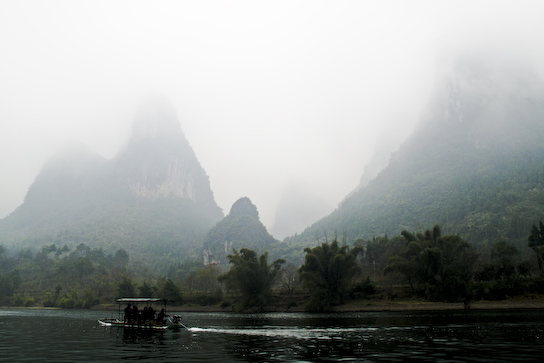 I was incredibly tired but the more I thought about it, the more I realized that the cafe was so warm in part because it was well insulated – and this meant that the coal fumes had no where to go except for our lungs, leaving very little room for fresh air. I tired explaining my logic to Tina but she was too busy looking up emergency numbers in the LP – somehow this is much funnier in retrosepct. I gave up, and rolled over and went to sleep. We ended up sleeping from about four that afternoon to late the next morning.

We had also planned to do a boat trip down one of the rivers around Yangshuo. And since we the bike ride took us along the Yulong River, we decided to check out the Li River. We hoped the weather would stay nice, but instead we woke up to a steady drizzle. At first I was kinda bummed, but then on the ride up I noticed that the fog and mist added to the mystery and romance of the karst scenery. 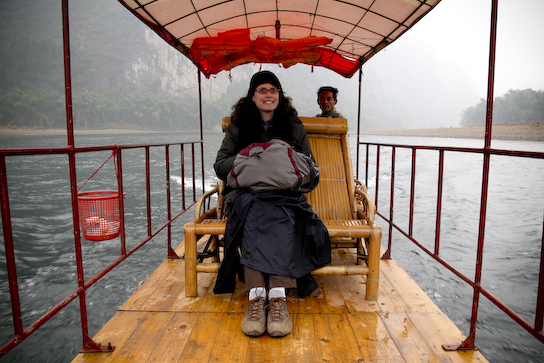 Tina and our boat captain.

When we got to the bus station, we only had a few minutes until the bus left. But that didn’t matter because once they started letting people on, it was a mad rush to get seats. I pushed my way through the scrum but only scored one seat-  which I gave to Tina (Boyfriend of the Year Award points: 100) – and took my place standing next to her. There were quite a few people standing and when we got to the station exit, they made everyone – but not me for some reason – get off, walk across the exit, then when the bus exited, they all got back on. At that point they tossed around little pink stools for us standers to use as seats. 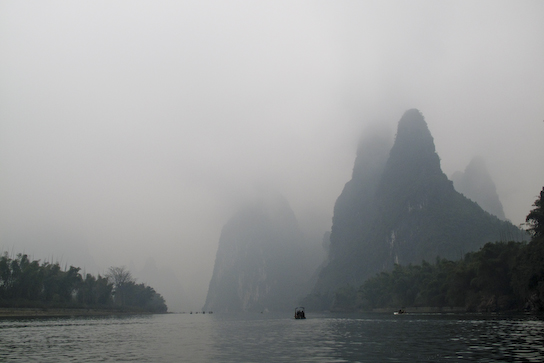 After quickly eating our peanut butter sandwiches along the river – while being harassed by people wanting to give us a boat ride – we decided that it was finally time to give in to the offers. Unfortunately, at that point they had stopped coming and most boats had left. So we wandered around a bit until finding a woman who took my low ball offer and we set off down towards the town of XingPing. The scenery was great – well, at least the parts we could see – as most peaks were under heavy fog. 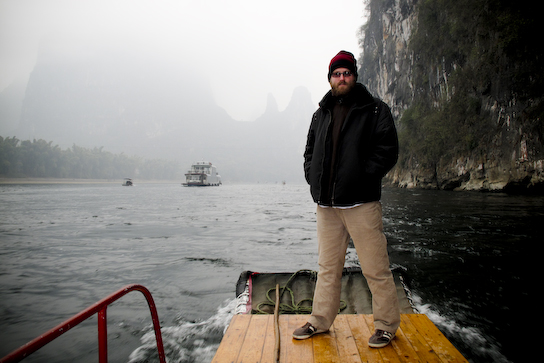