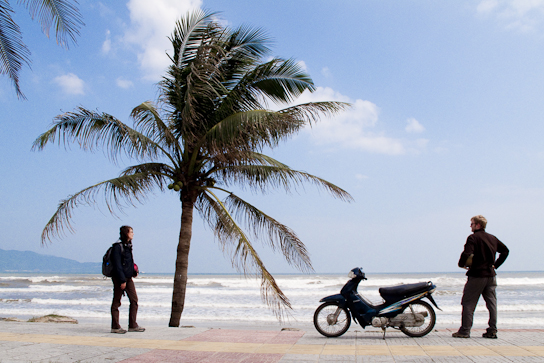 Chilling on China Beach during our first tour.

It was rather awkward when the bus pulled into Danang and we were the only people to get off. All the faces of the tourists remaining on the bus pressed up against the window with expressions of disbelief. As if to say “Do you really mean to get off here? Tourists don’t go here, we all go straight to Hoi An”. 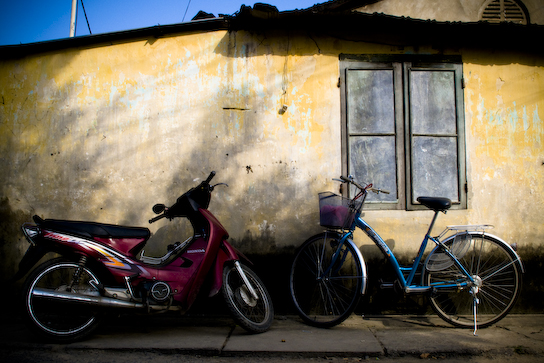 Two bikes and a house. 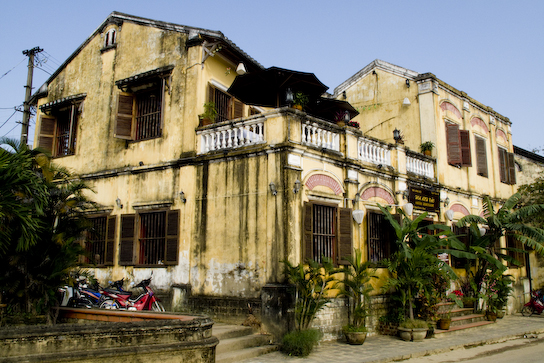 Most buildings where a faded yellow with a nice mold patina.

However, the lack of tourists, along with the chill beach vibe, made Danang rather enjoyable (thanks for staying on the bus, guys!). We had a great lunch – maybe the best street pho yet at a little place around the corner from our hotel – then wandered around the city checking out a few pagodas and temples. 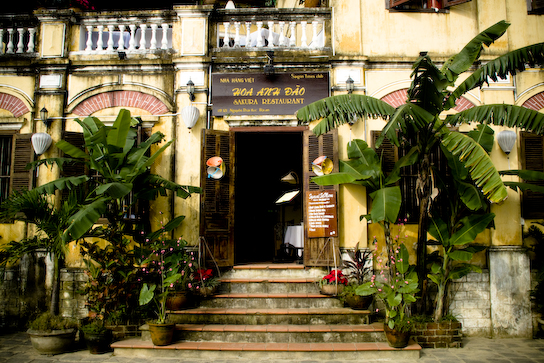 There was a nice Mediterranean feel to the buildings. 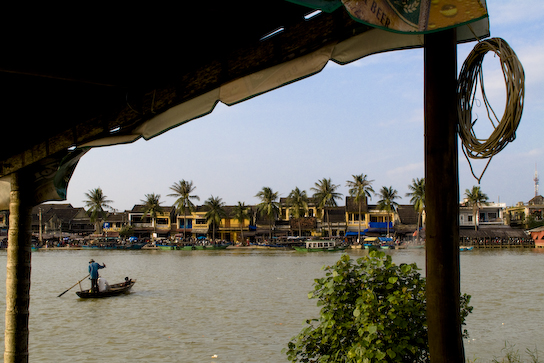 Looking across the Thu Bon River at the Old Town.

That night for dinner we ate at a Western-style restaurant where the staff was deaf. The organization that runs the restaurant teaches the staff sign language as well as training them on how to work in a kitchen and restaurant. Teaching them these skills gives them a chance to make a life for themselves and become a “valuable” member of society – since most people with disabilities are considered a burden on society and kept locked away in their family’s house. 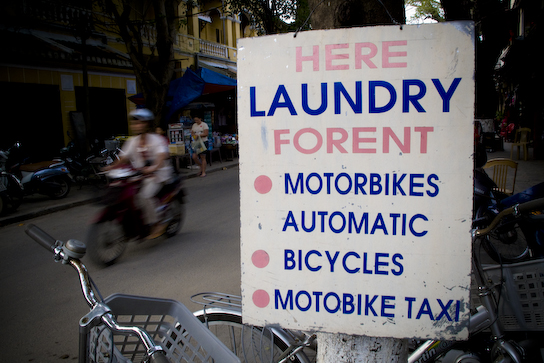 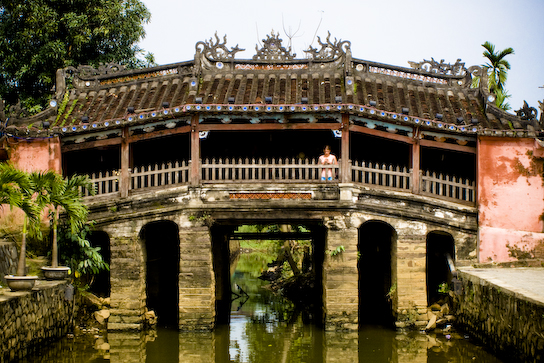 But not to be too depressing, I had a pizza called the Da Nang: Charcoal grilled spicy pork, peanuts, sliced hot peppers, roasted onions, roasted garlic, fresh mint, fresh basil, with mozzarella cheese on peanut sauce. Fantastic. Where you at CPK? 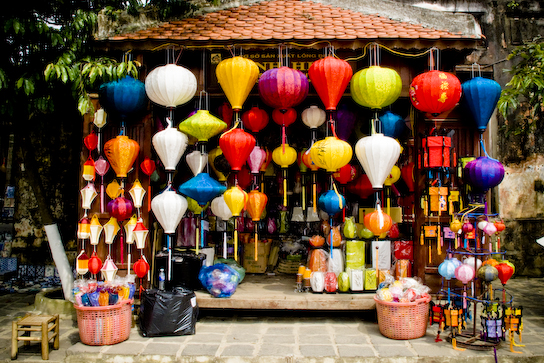 There were lots of lantern stores along the waterfront. 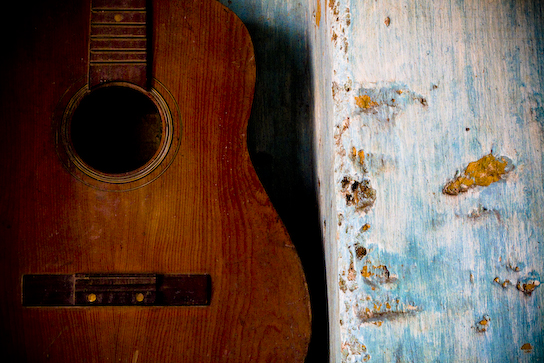 The next day we rented a motorbike and cruised the coast ending up at the famed China Beach – where GI’s would hang out before going back to combat. After eating lunch on the beach, we headed back to the hotel and got a ride down to Hoi An, a sleepy town on the Thu Bon River, to meet Shirin for dinner before her flight to Saigon. 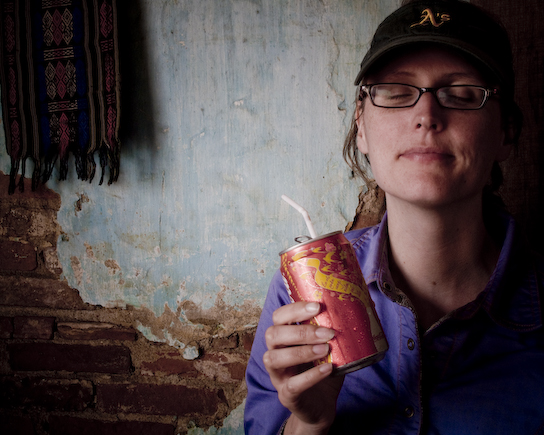 All Tina needs is a nice cold Coke to be satisfied.

She told us of a good street to look for a place to stay, so we had the taxi driver drop us off there and then did the hotel shuffle until finding one that was the right price. The room was great – French doors leading to a balcony overlooking the street. Perfect for hanging out and for hanging our laundry out to dry, too. And it had a shower curtain.

Tina and I love to spend time in bookstores, so anytime we’re in a town which has something that resembles a bookstore, we have to check it out – even if it has no English titles. So after breaking away from sunny, breezy hotel room, we walked around the Old Town then across the bridge to Cam Nam Island looking for Randy’s Book Exchange, billed as the “best bookstore in Vietnam”. Oddly enough, he might be right. 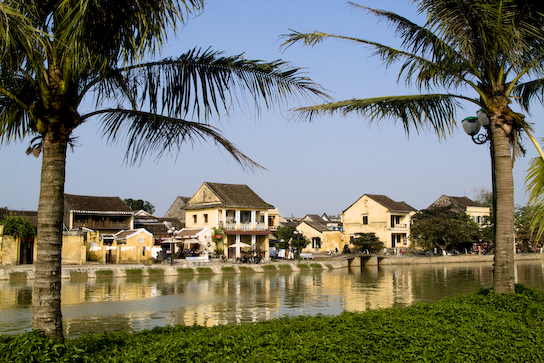 Old Town from across the river. 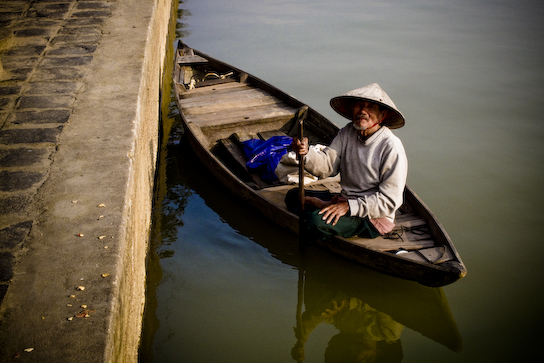 An old man in the Old Town begging for money.

On the way to Randy’s, we passed lots of stores selling illegal copies of books. It was as if someone took a bunch of books to Kinko’s and made hundreds of copies. Usually the covers looked pretty legit, but once you opened the book, it looked just like a bad copy. All the stores had the same books – best sellers, Vietnamese-centric, and even lots of Lonely Planet guides – and some stores tried to pass the books off as real by pointing out how nice the covers were, then charging more. 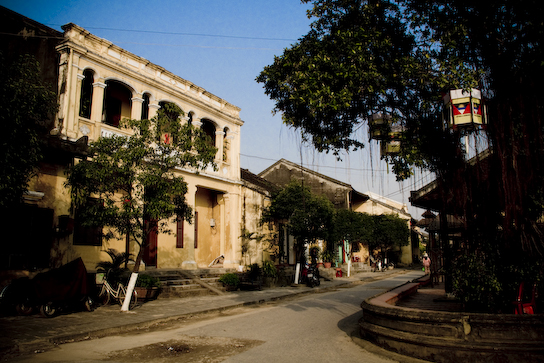 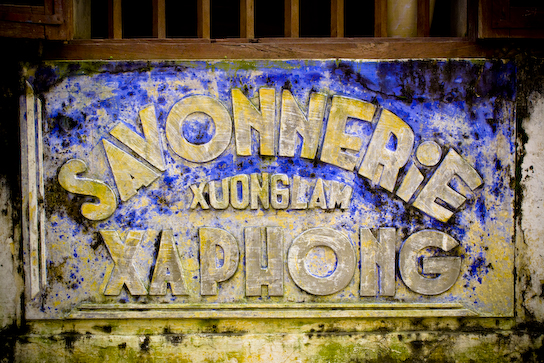 When we first saw Randy, he was sitting on the front porch of his house/store eating a huge steak and mashed potatoes. He was sitting with a friend who looked the part for an 80’s war movie: built, close-cropped hair, aviator glasses, big chin. Randy was a large man with an even larger soul patch that might not have been trimmed since the 80’s. He’s an expat living in Vietnam for the past few years because he “just had to get out of the States”. Tired of never finding good books while traveling, he decided to open a book exchange. The other guy was working in Danang and came down for dinner. 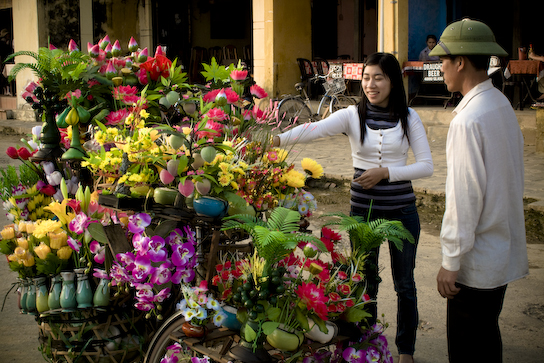 A flower salesman’s bike. Yes, there is a bike under there. 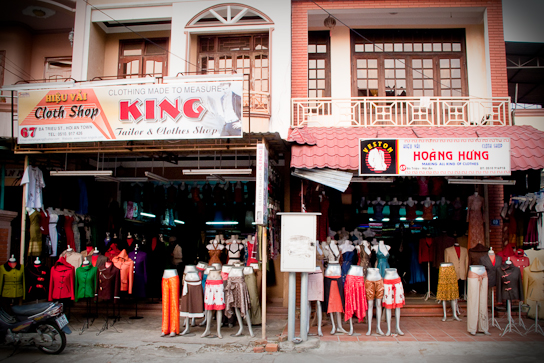 Two of the millions of custom clothing shops.

After Tina and I browsed his collection – and not finding anything we wanted – we got to talking with them about our trip and their experiences in Vietnam. They both had Vietnamese girlfriends who gave them a lifeline to the local culture. We talked about how hard it was to get things for a good price at the local markets because they all wanted to overcharge you. 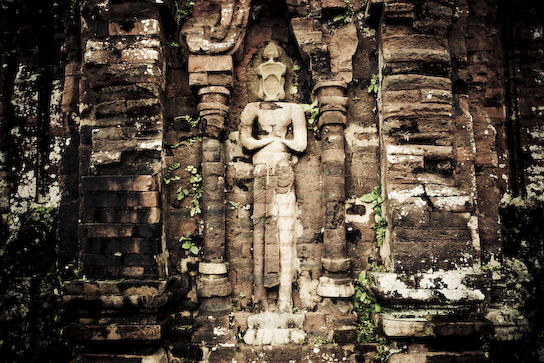 Detail of a building at My Son. 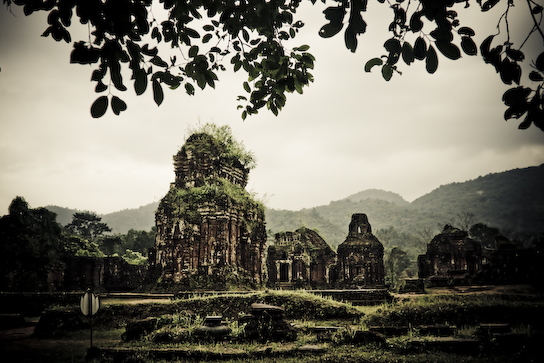 One of the few remaining buildings at My Son.

Randy’s buddy said that even when he went shopping with his girlfriend, the local vendors wouldn’t give her the local price if they were together. So they had to split up, or have her to go the market alone to get the local price. They devised a plan where they went to the market, split up, the she went to a vendor and bought some food and introduced him and made a deal that she would give him the local price, and he would only shop at her stall. 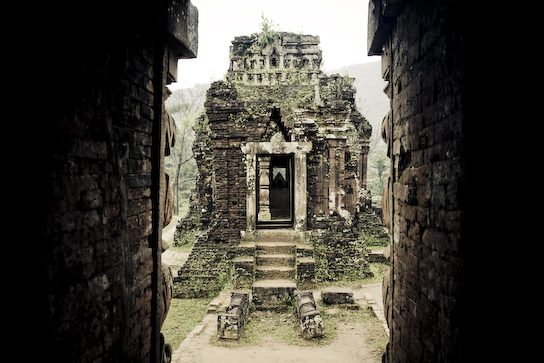 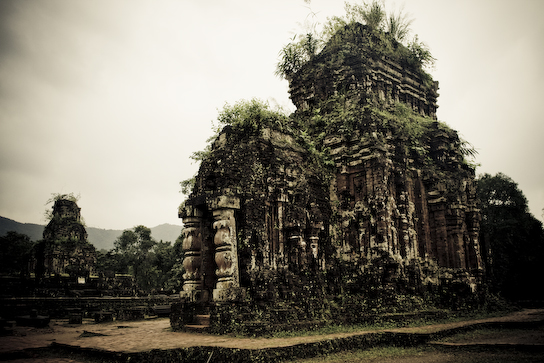 Speaking of getting ripped off, and meat, I have a serious beef with book exchanges: First of all, they only do a 2-for-1 trade, two of your books for one of theirs. Garbage. Then they turn around and sell each book for almost as much as a new book back in the States. So, not only are you now out a book, but if you want to get another book – to read, then to have two books to trade – you have to pay a lot for a book they didn’t pay anything for with their stupid scheme. Basically, they have no money invested but charge as if they do. 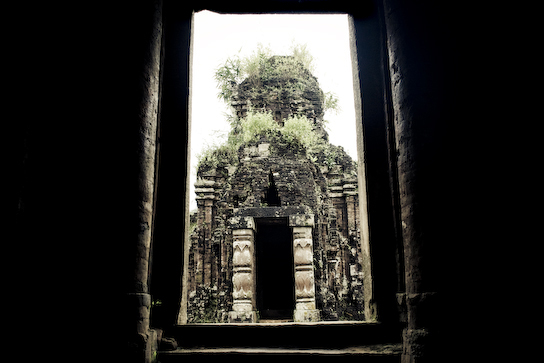 Anyway…. Randy was pretty curious about our trip and said he had some helpful travel tips for Cambodia – all hand-picked places. He disappeared into his shop for about 10 minutes then came out and said his printer was broken but he could email it to me. I gave him my address and was grateful for his inside info. But then later that night, when I read the stuff he sent, most of it was where one could get the best prostitutes and drugs. No wonder they named him Randy.

The previous night at dinner, Shirin mentioned a early morning tour to My Son (pronounced Me Sun), a UNESCO site that was a grand intellectual and religious site back in the day, and was purposely devastated by America during the War. The point of going first thing in the morning is to have the place to yourself – before the big tour buses show up. 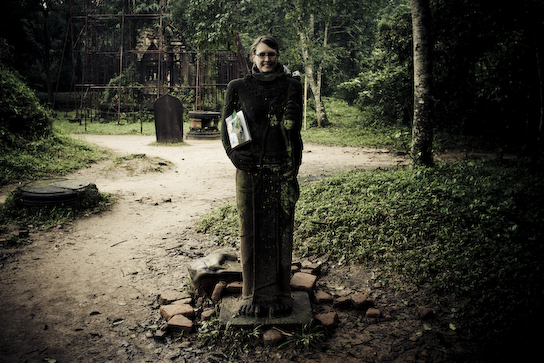 Tina posing behind a headless statue holding our LP guide.

So that morning we wandered around Old Town researching tour companies before signing up on a tour. Then we looked into cooking classes. Hoi An is a foodie highlight of Vietnam – deservedly so since everything we had there was great! – so it  is a good town for a class. The classes were run by restaurants, and it seemed like you sat with one of the cooks as they walked you through preparing the meal, then you ate the meal, you get the recipes. 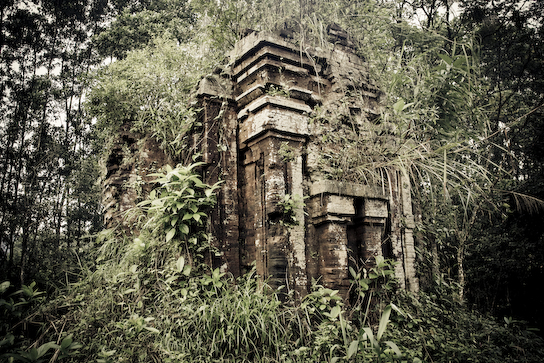 A partially hidden remnant of My Son.

Unfortunately, we never got to take a class. When we had previously spoke with the restaurants, they said it would be fine to could come back on the day we wanted to take the class and sign up. But when we came back to sign up the next day, they said they didn’t have enough time to buy  ingredients or get someone to lead the class. One restaurant even tried to send us by taxi to one of their employee’s sister’s house for the class. 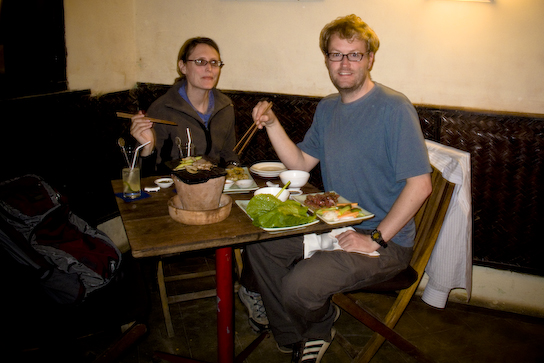 Tina and me enjoying our last meal in Hoi An.