The Visayas, Philippines – After spending five days on the beach in Boracay, it was time for a change of scenery: more beaches! We decided to head south to the Visayas, a group of islands forming the geographical heart of the Philippines. The only question remaining was how to get there. 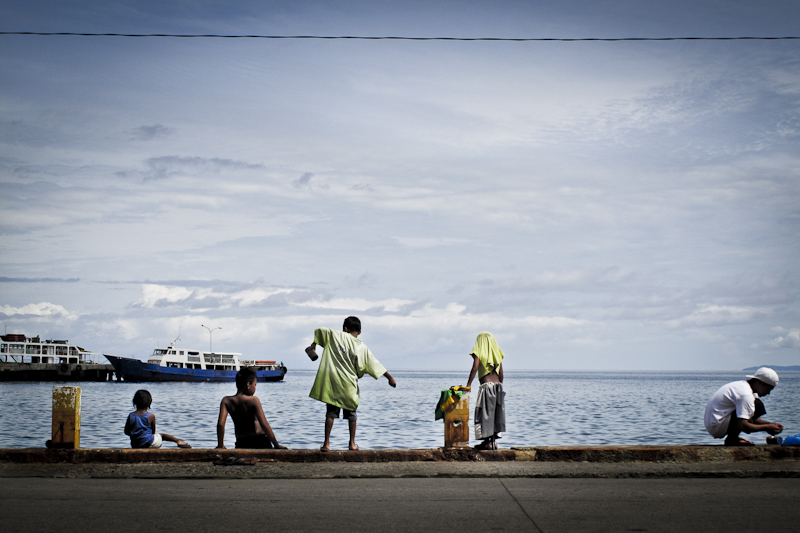 Kids fishing along the promenade.

One of the major differences with this trip is the amount of flying we’ll do fulfill our itinerary. On the last adventure, except for Stuart taking a flight in China saving two days of backtracking by train, we didn’t fly until our ninth month of travel. This time, however, with geography and border politics working against us, we’ll have to fly to almost every country (toss in the insanely low prices of discount airlines and you’d be crazy not to). 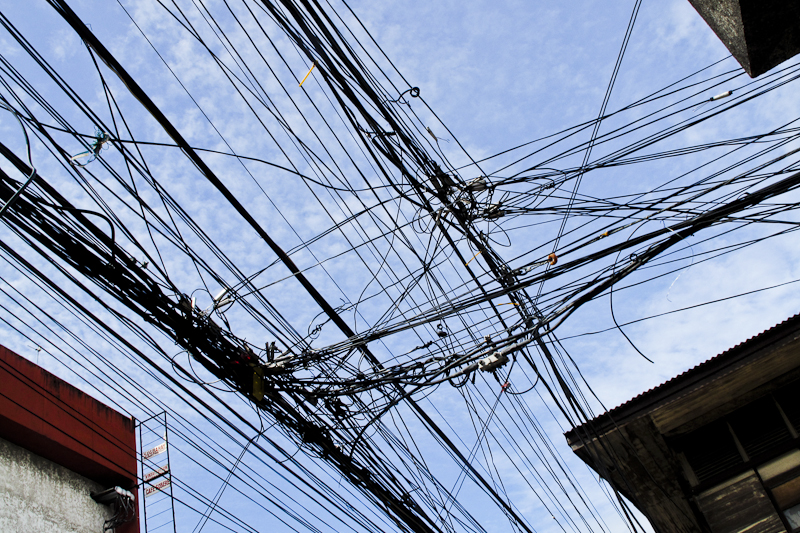 No wonder these towns have brownouts.

But flying is a sterile, isolating experience. Whereas traveling overland by public transportation allows you to mix with “the people”. On a bus, boat, van, etc. you have (or try to have) conversations, you stop at random roadside cafes with weird food, sit on broken pink stools or bags of rice, people share their food with you, vendors come on board and try to sell you things. You are in touch with the life around you.

The additional information you get from outside your window – scenes from towns, village life, geographical changes – help you gain insight about a place. You don’t get any of that from a seat on a plane. Traveling overland is about going someplace. Flying is about getting there. 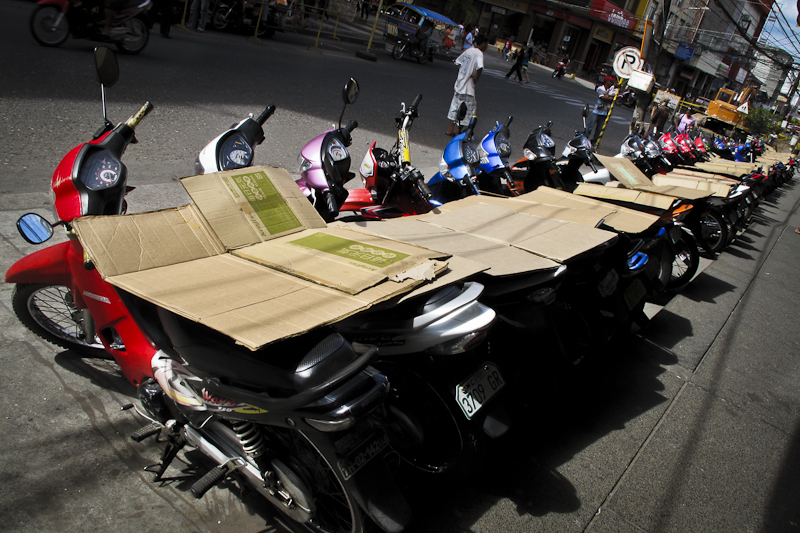 So we set off early in the morning and took a tricycle (basically a motorbike with a sidecar) to the ferry from Boracay to Cataclan, then a minivan to Iloilo, another ferry to Bocolad then a jeepny to the town’s southern bus station, and finally a bus down to Dumaguete – our final destination on the southeastern tip of Negros island. We rocked up to Harlod’s Mansion Inn around midnight – 16 hours later – after another tricycle ride.

Dumaguete is a buzzing little college town with a lovely promenade down by the water, lined with eateries and bars filled with “sexpats” – older, saggy Western men spending time, and money one presumes, with lovely young Filipino women who have a somewhat despondent look on their face when their man isn’t paying them attention. 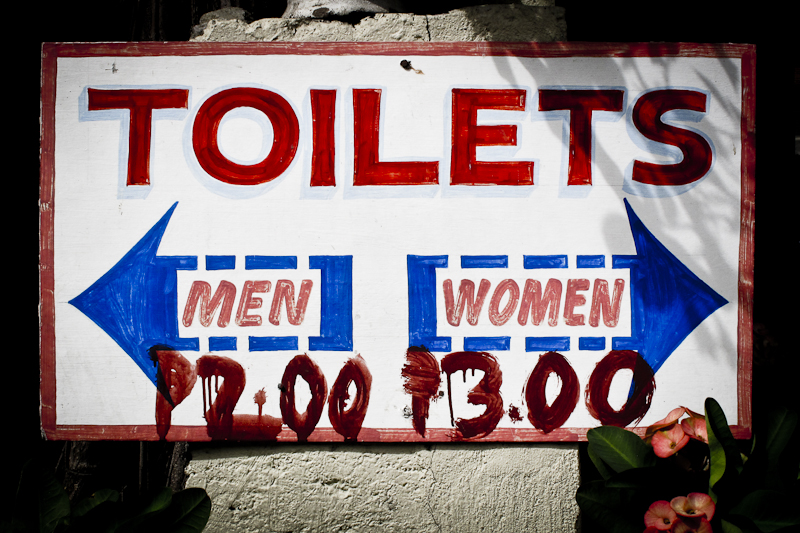 And we get paid more, too!

After spending the day wondering the city, exploring the vast market – tried some chocolate sticky rice (delicious), and eavesdropping on the morning service at a cathedral, we joined some guys from our hostel, Michael and Roger, for dinner – Michael was the first of many Canadian’s we’ll end up meeting who are on vacation from teaching English in Korea, and Rodger, mid-forties, works as a seasonal waiter in Tahoe and spends the off-months traveling. 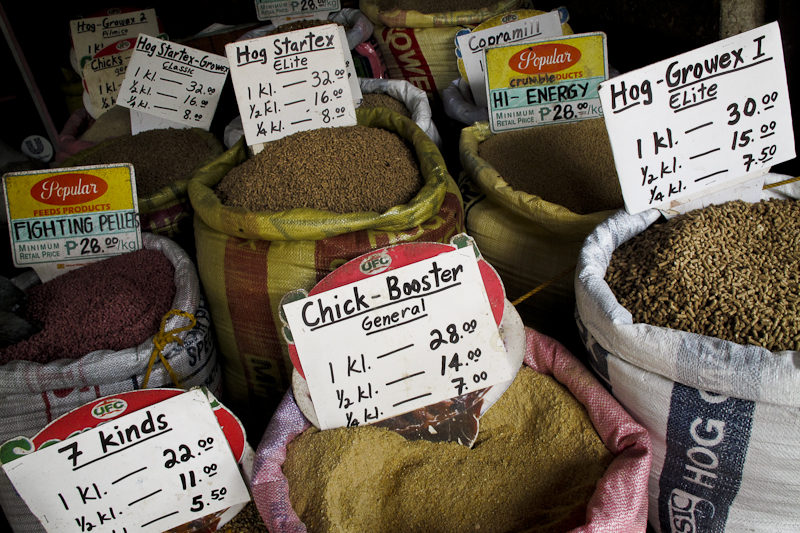 Feed shop at the market.

The next day we were picked up from our hostel by Glenn, our local guide for the day, who took us to a waterfall and up into the mountains to some lakes formed in a volcano crater. The waterfall was spectacular even though the water was a bit cloudy because of all the rain, and the fog covering the mountain only added to the mood of the lakes; they could have filmed Jurassic Park here. 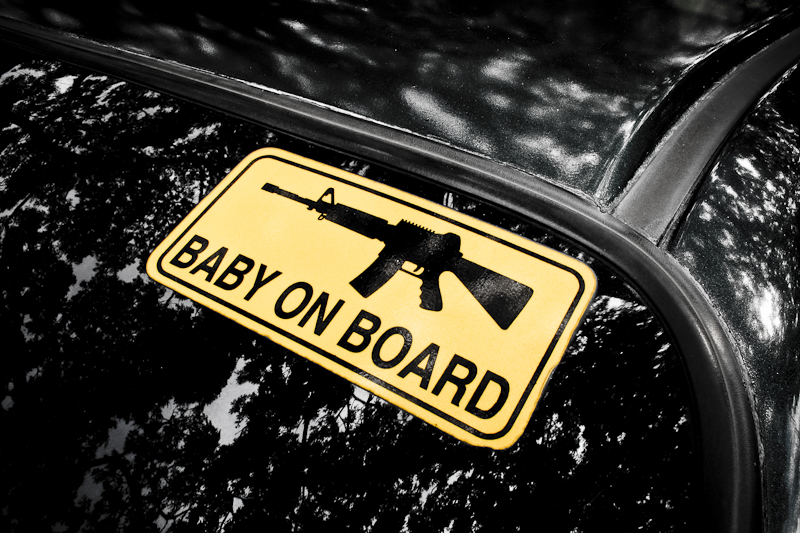 They do love their guns around here.

The two lakes were formed when a volcano erupted in a way which created two craters separated by a rock wall. Next to the dock near the first lake there was a path along the shore which led to a lookout between the two lakes. Or supposed to be, at least – the recent heavy rains made the lake overtake the trail requiring us to trek along the steep sides of the crater.

The hike to the lookout was fairly slippery going and took much longer than planned. We kept thinking that if this was a park back home, it would be shut down and covered with various warning signs.

From the lookout we could see the weather getting worse. So instead of trying to hike out, we decided to take a boat back to the dock – which Glenn hailed simply by shouting across the lake. While making our way back to shore the fog became so thick that we were completely enveloped, unable to see anything around us. 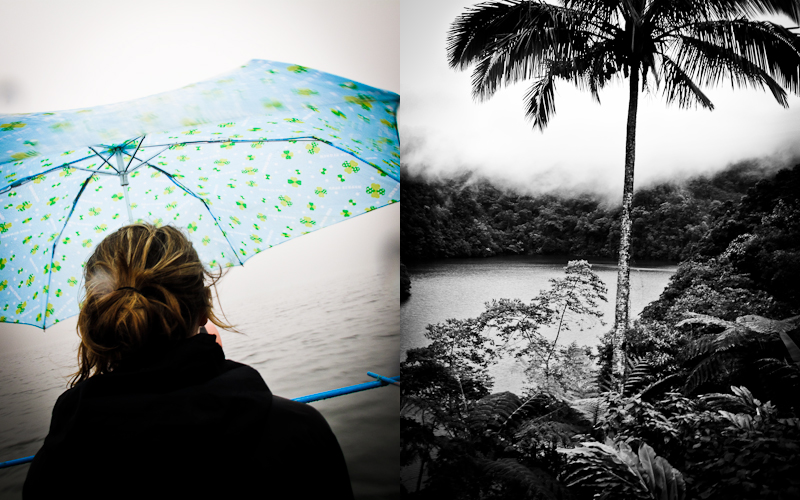 Trying to keep dry; View of the lake from the lookout.

Once back in town we went out for dinner then on the hunt for fried bannas. Earlier in the day I had seen a stand near our hostel, but when we got there it was closed. While we were poking around for banana stand a man sloped out from the entrance of some sort of gathering hall and started asking us where we were all from. Once we passed his test, he started lamenting about his Australian neighbor who was preventing him from expanding his business – something about a causeway next to his building. It was all very confusing. 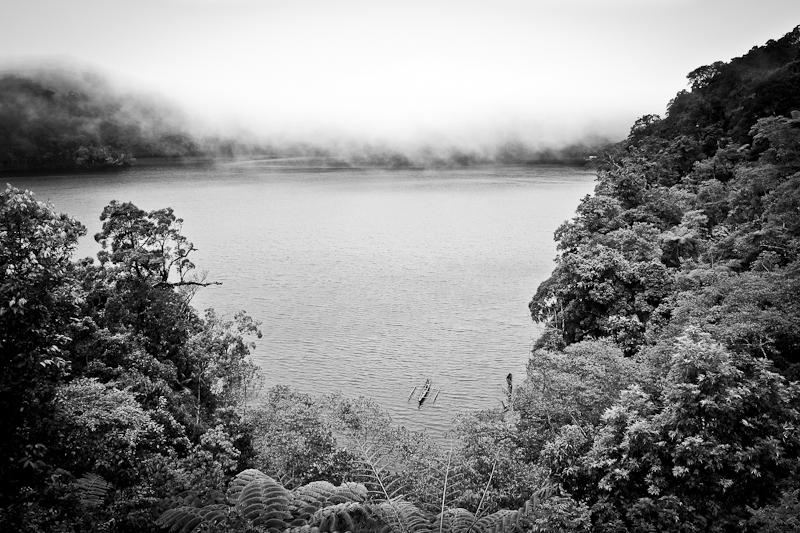 The rescue boat coming to get us.

When asked what his business was, he said he “runs a bar with no hanky-panky” which, in a town full of college students and sexpats, explained why the place was empty. Then in one last burst of energy he ranted about his neighbor, mentioned that fried bananas are only on sale from 3pm to 4pm, and that “caucasians, like Germans, think they are better than everyone else”.