Saigon, Phu Quoc, and Con Dao, Vietnam – Full hotels, sold out ferries, closed restaurants, and about a million more motorbikes. That’s what Saigon was like when we visited last time – which was also the first night of Tet, the Vietnamese New Year. So, since we were in the neighborhood, we decided to stop by and see what the city was normally like.

Our second visit didn’t start out so well: We insisted the cab driver from the airport use the meter so he took the long way to our hotel, and I mean, long way, which ended up costing us over twice what it should have. Then the hotel got our reservation wrong and didn’t have a free room. 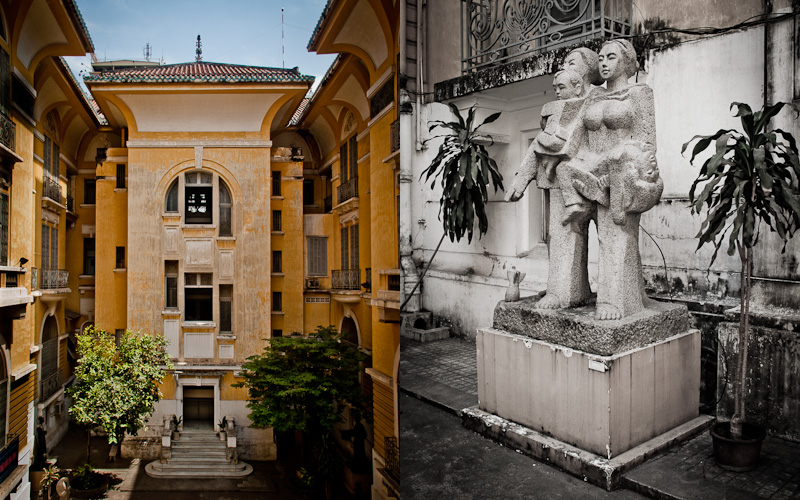 Fortunately in the backpacker section of town, all the hotels are basically the same, so we found a room just down the street, with a nicer owner who suggested a pho place nearby which made everything alright.

And this is the seduction of Vietnam: you can get ripped off by people, lose your hotel room, get clipped by a passing motorbike – anything. But once that first sip of piping-hot pho, with bits of lime, cilantro, and chilies burns your throat and makes your nose run, you can’t help but proclaim your love for this country. She is easily forgiven.

We spent our precious few days in Saigon basically doing three things: eating delicious food (street-side pho, dinner at Lemongrass), drinking fresh lemon sodas (“lemon sugar waters” as Tina calls them) from drink stands with misters, and haggling hard in the markets (for a sun visor, a watch, and some luggage tags) after downing a fresh mango shake. 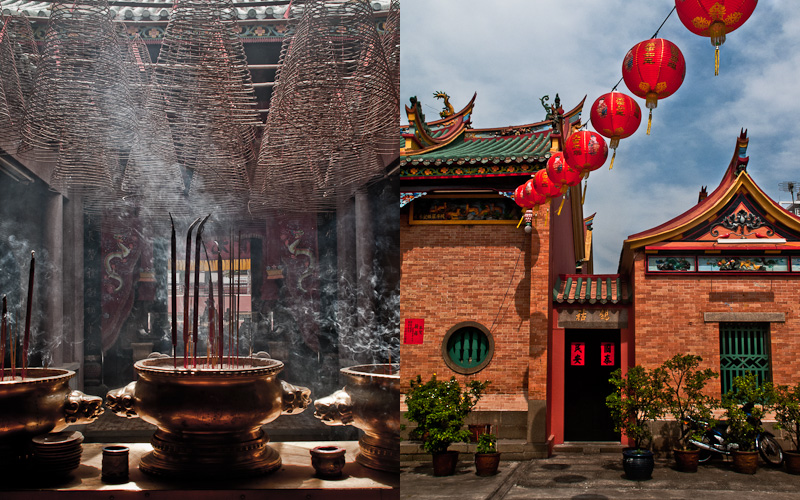 Occasionally we’d check out a “sight” like the Dan Sinh Market which sells authentic and fabricated equipment leftover from the American War (or the Vietnam War as we call it), or the Museum of Ho Chi Min City – a classic colonial building with promenades, columns, and sculpted gardens – where the most interesting display was the flurry of soon-to-be brides and grooms running around getting their photos taken in choice locations.

In a scene fit for MTV’s Bridezillia, one couple was monopolizing the grand staircase – they were there for well over 30 minutes! – other couples started walking up the stairs, and the sitting bride’s dress, while the photographer was shooting, acting as though they were passing the cleaning lady. Oh, no she didn’t!

Being unable to visit the Phu Quoc, an island off the delta region, because of Tet was one of my biggest regrets from last time. So this time we planned it all out, decided to fly, and after trying numerous hotels, and slowly increasing our budget, we finally found a resort with vacancy for our dates. 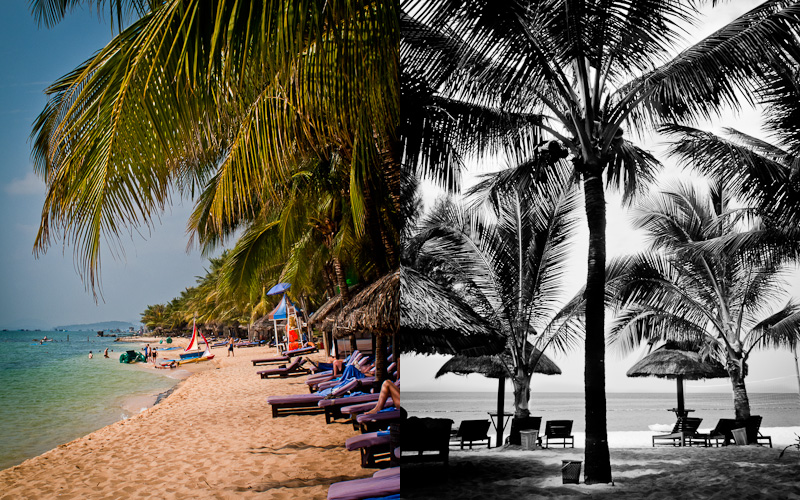 Views from our hotel on Phu Quoc.

We spent most of the time lounging on the beach, or by the pool, with the occasional walk down the sand – where fishermen used manual pulleys operated with hands and feet to reel in their nets. The water was perfect, there was delicious food across the street from our hotel, and the resort was ridiculously nice – even had an enclosed area for the shower!

On our last day we rented a motorbike and explored the southern part of the island – cruising on hard, red clay roads through little villages and miles of empty shoreline – eventually ending up at Bai Sao, a beautiful beach on the eastern side with bright white sand and clear water – before heading back north to a little fishing village and then up to another beach for sunset. 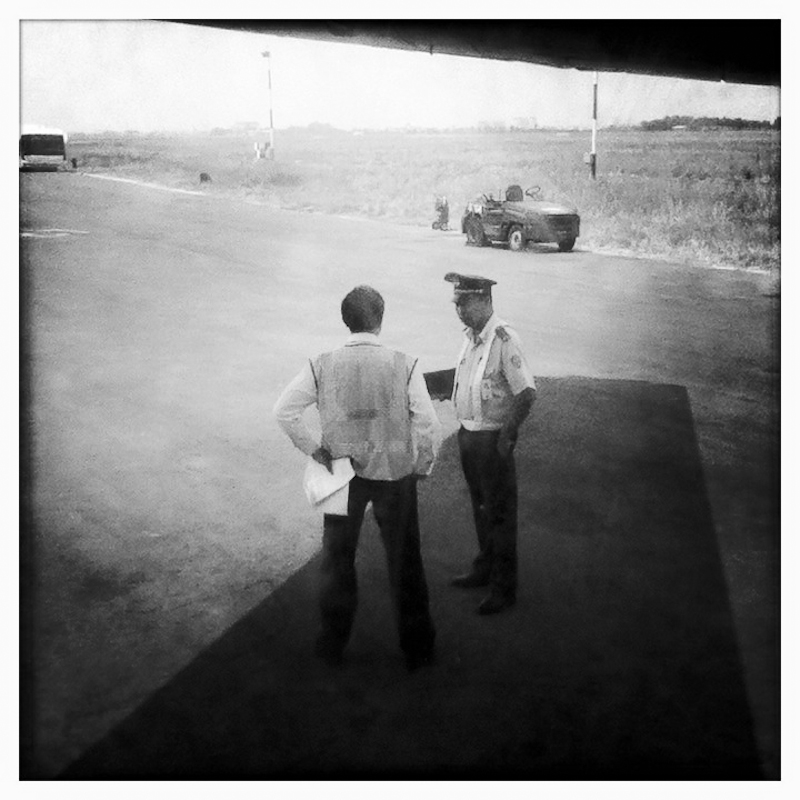 Now, maybe it’s because I built up Phu Quoc too much, or because we had been spoiled by some of the world’s best beaches in the Philippines, but I wasn’t too impressed. The main beaches were narrow and overdeveloped, and instead of cleaning the trash, they just raked sand over it.

Our disappointment was justified as we landed in Con Dao – a smaller group of islands on the China Sea to the east of Vietnam – and the geographic difference was stunning. And that was just the beginning. 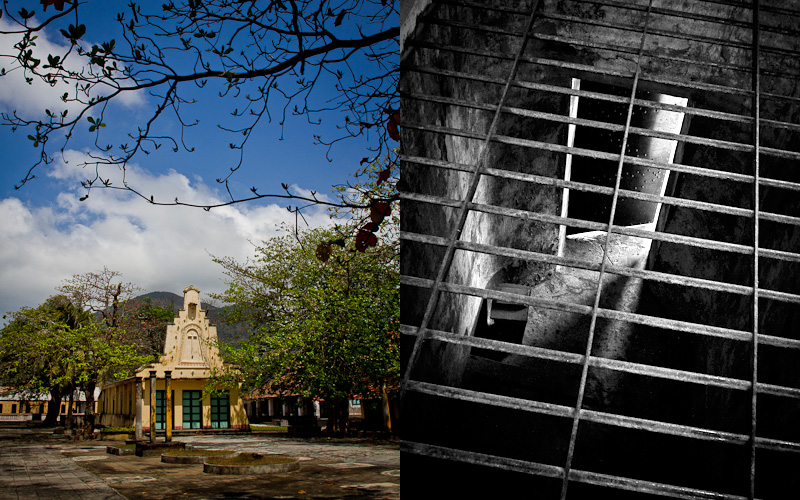 Prison Church; Looking down into the Tiger Cages.

Phu Quoc is relatively flat with rice fields, forest, and little fishing villages. The islands of Con Dao are rocky, mountainous islands jutting out of the sea with grassy hills looking like something borrowed from Scotland overlooking the coast. Phu Quoc is constantly sunny; Con Dao can be a bit moody and clouds usually gather around the highest peak.

Phu Quoc has warm, clear water depending on the sun; Con Dao’s water is a bit cooler since it’s not snuggled up between the delta and Cambodia, but the water is so clear that even on a cloudy day you can see your perfect shadow on the ocean floor while in deep water.

I was in love with Con Dao instantly.

The main island, Con Son, is so narrow that the runway literally goes from coast to coast – you see one coast when you land, then the other when the plane taxis around to the “terminal” – which is really just a small building where they bring the luggage over on the baggage truck – then leave it for you to collect. This is also the flattest part of the island. 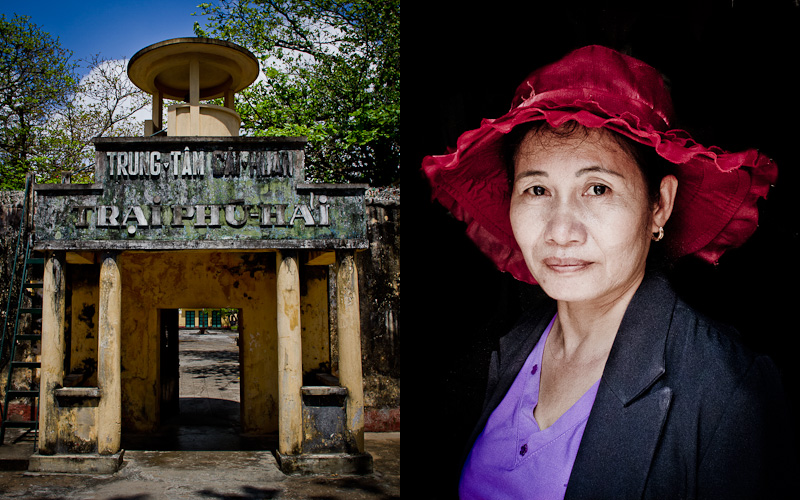 Entrence to Phu Hai Prison; One of the few local tourists.

The ride to the hotel reminded me of driving along the coast in California – but while not quite as grand, the water was sure to be warmer. The road goes from the airport, to the Con Son Town, then wraps around the southern tip and ends just past a cove filled with a little fishing village – which later made for a spectacular day spent exploring by motorbike.

Our hotel was right on the beach outside Con Son Town, and had a huge open-air lobby which looked out to the terraced pool area that went right down the the beach, and who’s walls were covered with a fresh coat of sunset every night. We never wanted to leave. Until we heard the sounds of renovation. 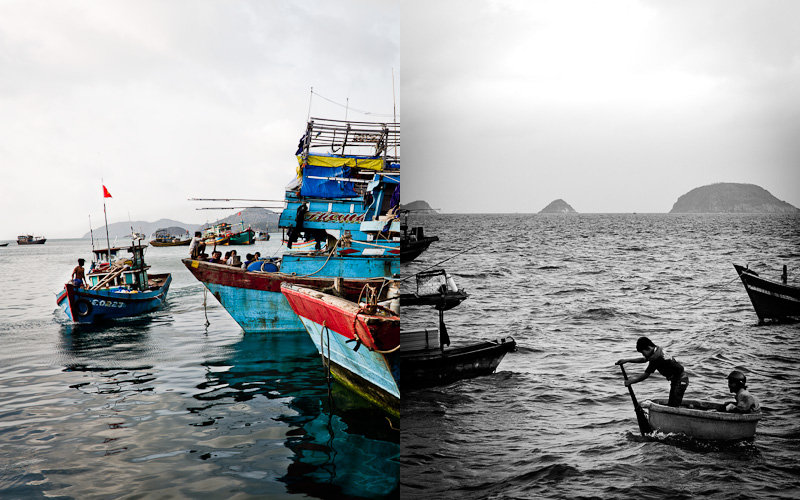 Wanting to reign in the budget from the Pho Quoc Splurge, we had booked the cheaper “mountain view” rooms instead of the “ocean view” rooms. But upon inspection from outside, almost every room on our side of the building was being renovated except ours. Since we planned on being on the beach, we didn’t think we’d mind – forgetting that the workday in Vietnam starts about about 5 am and ends around 8 pm.

After a couple days of dealing with construction, we asked the hotel if they had rooms in a little annex out by the pool. That was a family area they said, but they did have a row of little bungalows down by the water which were quiet, you could see and hear the waves crash, and the kicker was that they were even cheaper than our room in the demolition zone. Kinda wish the hotel had mentioned these sweet huts when we checked in.

Con Son Town is a little collection of streets between the beach and a valley next to the mountains which they use to grow most of their food; along the shore there is a promenade locals stroll and catch up with neighbors as the fishermen come back from a long day at sea. 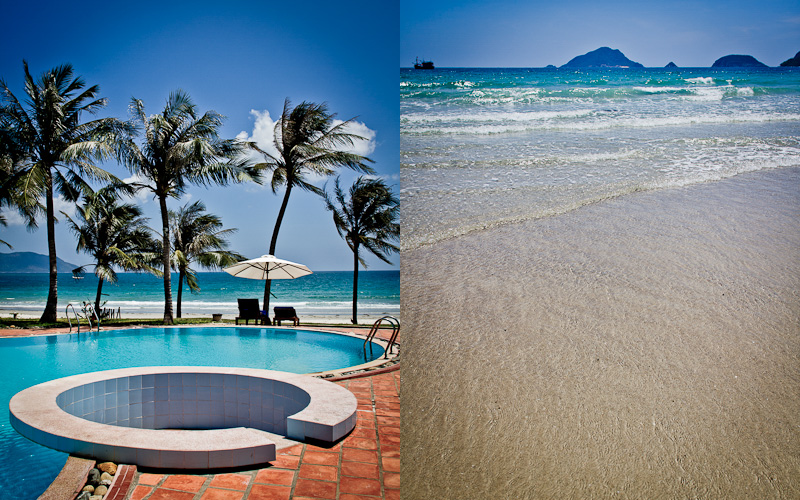 The pool at our hotel; Low tide.

Since our hotel was so close to town, we would spend the mornings lounging around the pool or the beach, then walk into town and eat lunch at a delicious little pho shop where the staff would also be lounging around waiting for customers.

But there are clouds around the peaks of Con Dao. The island is also the location of prisons, including the infamous “tiger cages”, built by the French during their occupation and then later used by America to hold and abuse thousands of Vietnamese during the war. 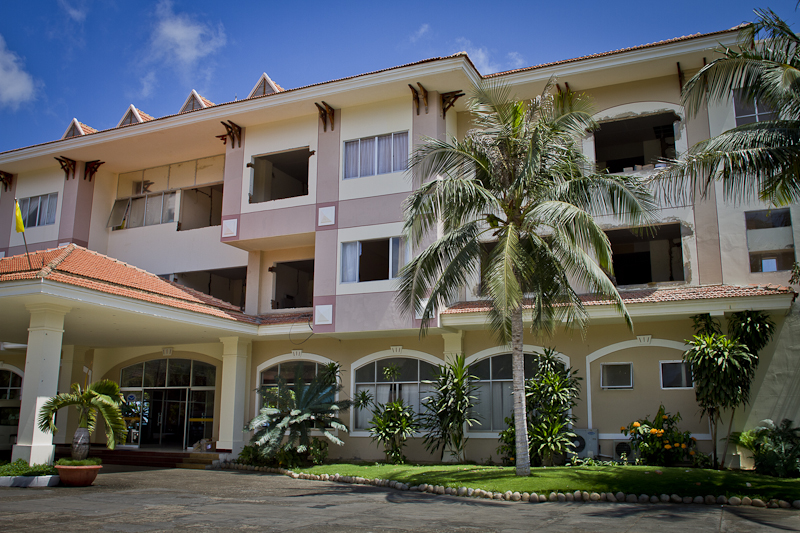 Some of the prisons are open for visiting, and when combined with a visit from the Revolutionary Museum, which is also on the island, it makes for a chilling day learning what mankind did, and is still doing to mankind.

This unpleasant history might also be the largest factor in what is Con Dao’s best feature: it is practically empty of tourists; sometimes it feels empty all together. Given it’s the same distance from Saigon as Phu Quoc, it’s actually cheaper, and you can own a stretch of beach for most of an afternoon, it’s by far the better island.

I guess spending time on a stunning tropical island, complete with prisons, isn’t everyone’s idea of paradise. I’m sure there are thousands who considered it torture.