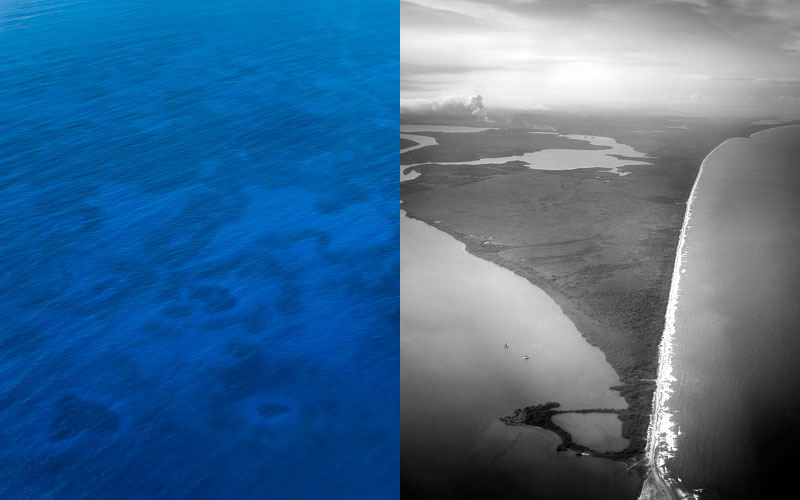 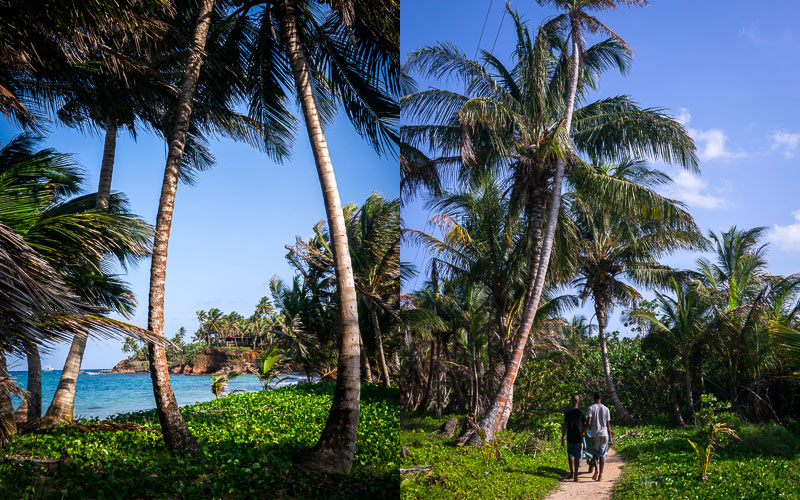 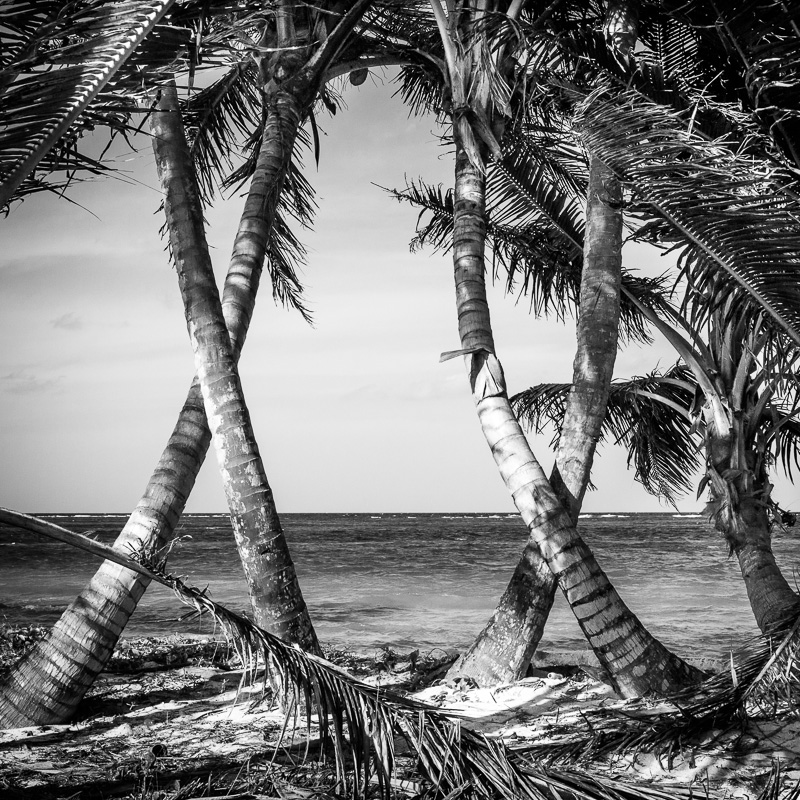 We couldn’t get enough of the crossed coconut trees.

The island was unseasonably crowded, in fact we got the last room at Grace’s – so after we checked in we booked it to the dive shops. There are only two dive shops on the island and they were also unseasonably busy. After going back and forth between the two we managed to book two dives at each shop – one less dive than we had hopped for, but we were happy to get any. Actually, it turned out that we got in on one of the dives because a couple had to cancel their booking because their daughter, who was supposed to meet up with them, couldn’t make it to the island in time because the ferry from Bluefields broke down. Upon hearing that, we were super thankful that we had flown instead of taking the long, adventurous journey. 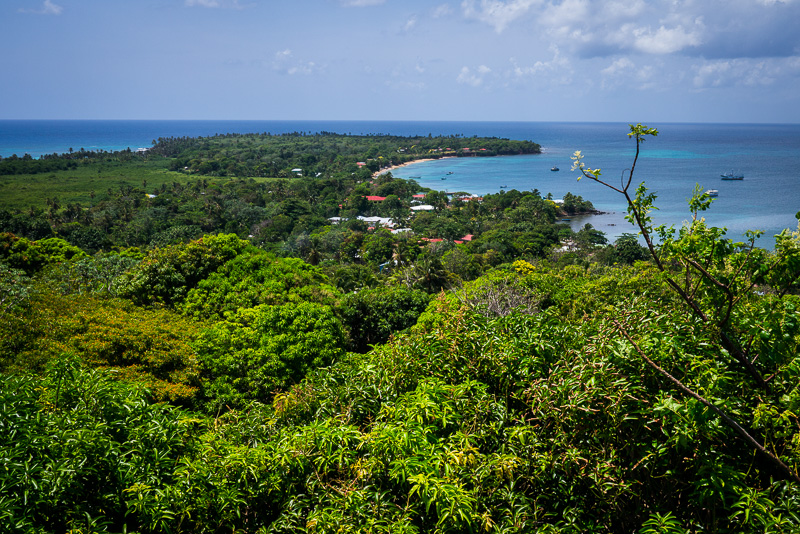 The view from the observation tower in the center of the island.

After we booked our dives we had dinner and then walked back to our side of island. It got pretty dark on the path and we were glad we brought a flashlight (rule no. 1 when traveling – always bring a flashlight). There were lots of crabs on the trail, I guess they come in off the beach and spend the night in the trees, so the flashlight was super handy for avoiding smashing crabs. We ended up sharing our light with a couple walking behind us and as we chatted, we learned that they were the parents who were waiting for their daughter. They still hadn’t heard from her and weren’t sure how long it would take her to make it to the island.

The next day we did two dives, one with Dive Little Corn in the morning and one with Dolphin Dive in the afternoon. As luck would have it we ended up going to the same dive spot, Yellowtail, on both dives. That was a little disappointing, but we were just happy to be diving. The visibility on these dives wasn’t great and the colors and variety of fish wasn’t as good as Roatan (maybe we shouldn’t have started our diving adventures in one of the best places in Central America to dive). But they were still fun – Stuart says he saw a reef shark at the beginning of the second dive, but no one else saw it, so I’m not so sure… 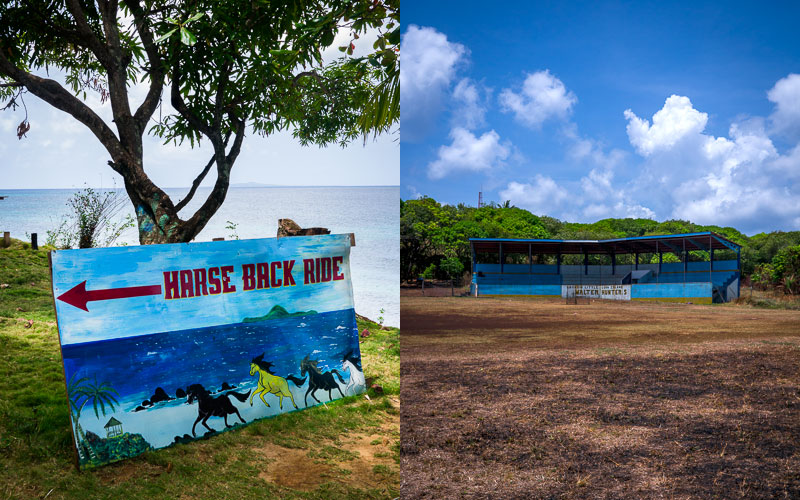 Did Irish people make this sign?; Both Corn islands have baseball teams which play games on Sundays.

Our third dive the next day was to a spot called Tunnels & Caves. I was a bit uneasy about diving there because it sounded dark, but it ended up being okay and Stuart managed to score us an underwater flashlight that I used in the dark spots. Overall it wasn’t too dark and it was a really cool dive. In one of the caves, there was light shining through the top and there were millions of these tiny silver fish sparkling and  glimmering in the sunlight. It was just beautiful, even our dive master was impressed. We also saw a bunch of nurse sharks and an eel perched on a rock inside one of the caves. Nurse sharks are pretty docile, so its not like seeing a reef shark (ask Stuart, maybe) but they’re still sharks and its still pretty thrilling to come across them under water! The fourth dive was just okay, we went to a spot called Bouy. We didn’t see much on that dive, but as new divers we are still super excited about just being under the water. 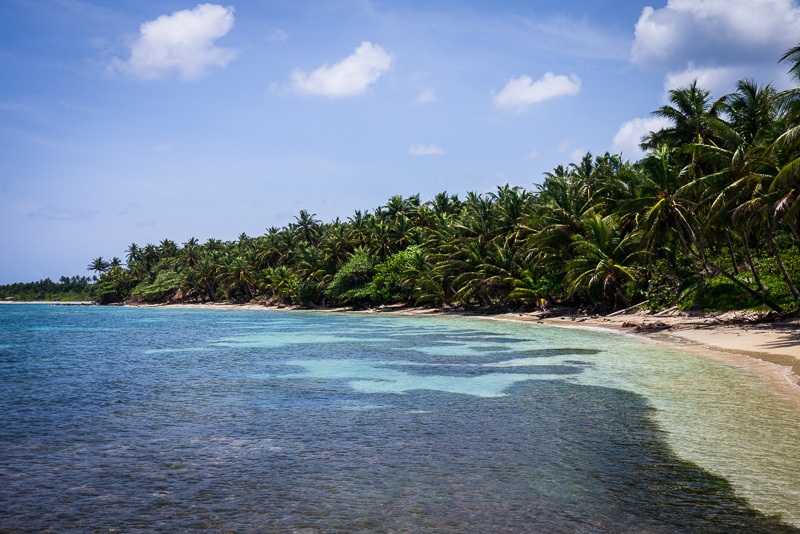 Most of the island is undeveloped.

The island was pretty full, but thankfully it didn’t feel crowded. We had a lot of quiet beach time in between our dives and usually had whole sections of the beach to ourselves. The only thing that felt crowded were the restaurants. We often had to wait quite a while for our food and we even had to leave a restaurant once without eating getting our food because it took so long that we were late for our dive. I think they forgot our order and we just didn’t have the time to wait so we bought a bag of chips and had to scarf it down before our dive. Overall our dining experiences were very good. We had some great meals and really good seafood and met a few good people, too