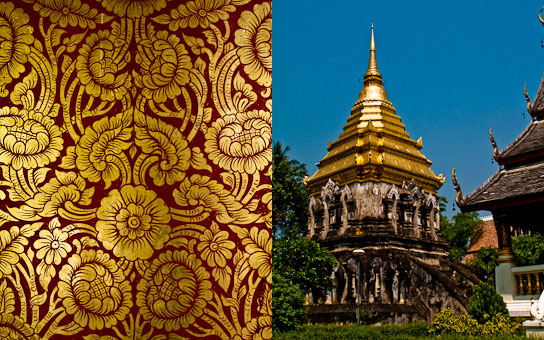 When crossing the Mekong into Thailand from Laos, things did change that fast. Everything was paved, shiny, hammockless – and there was a sense of being with people who had someplace to be soon. When I asked our minibus driver if we were all going to get our own seat or if he would cram as many people in, he laughed at me for thinking they would stuff it like a Thanksgiving turkey. “It only has eleven seats”, he said. “No more”. 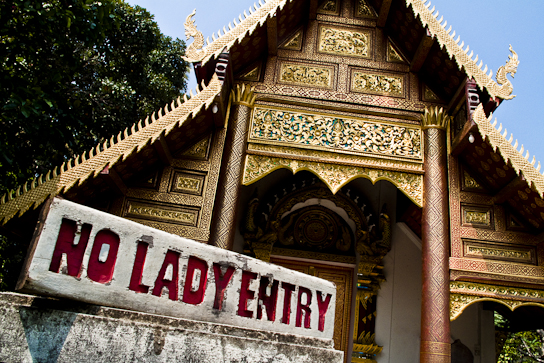 Our time spent getting our Thailand visas while in Vientiane paid off – we got a 60-day stay, but the people we were crossing with, who didn’t have a visa, only got 15 days. It also paid off that I am taller then the average Asian – the immigration office was a zoo, but learning a trick I discovered in China, I pushed towards the officer and reached over everyone and put our passports through the window into his hands. He took care of us next.

On the way to Chiang Mai, we stopped at what was basically a truck stop for lunch. The restaurant only had pad thai or rice and vegetables. We had the pad thai, and it was fantastic. With truck stop food being so good, we got excited for what it would be like at an actual restaurant. Wanting to keep the streak of good cheap food alive, we ate dinner that night at a street stall for a couple bucks total. Green curry with chicken. It was also delicious. 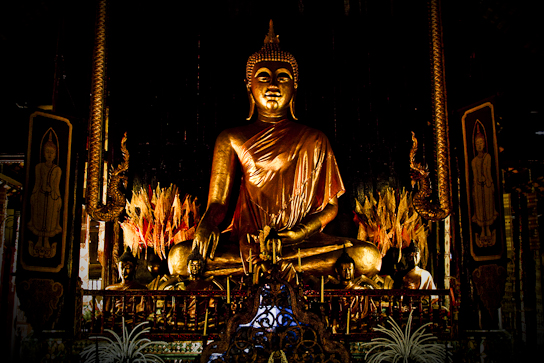 Shrine to a sitting Buddha.

After dinner I got my hair cut on the cheap, and the short, before checking out a section of town packed with bookstores. We talked with one owner, and Irish guy who had some words to say about America. He told us that he was the only bookshop here for years until this America moved in and started up a few stores. The American started a marketing blitz and said his goal was to but the Irish guy out of business. 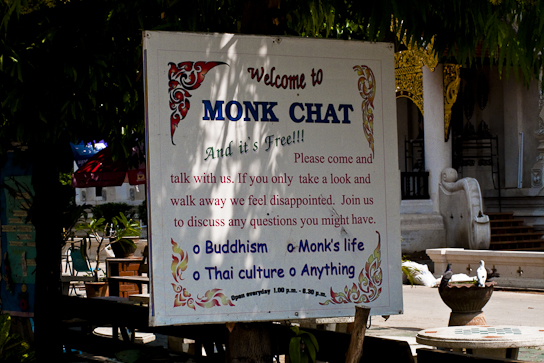 The Irish guy decided that the only way to compete was to move his bookstore right next to the American’s. This infuriated the American. So every time they saw each other in the street, the American would shout things like, “I hope you die” and “I’m gonna take you over” and other juvenile threats. The Irishman found it somewhat amusing, but it left him with a bad taste of Americans. We tried to explain we were all bad, but he wasn’t buying. So neither did we.

Chiang Mai was filled with lots of wats, cafes, night markets and cooking classes which kept us pretty busy. To escape the heat we even checked out the Cultural Center which was nicely done and would be a dreamland for someone who was actually interested in the history of the town. The only thing we were interested in was the air conditioning. 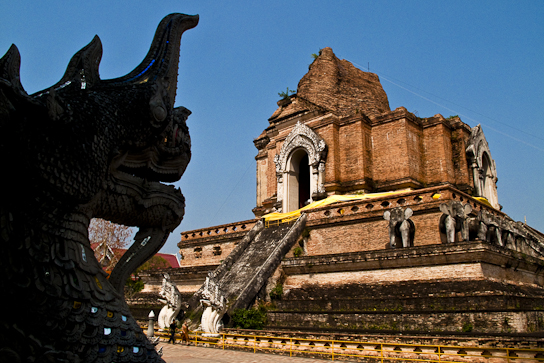 Contrary to what we had expected, Chiang Mai wasn’t that touristy. When our bus arrived in the afternoon, we had seen tourists all over the place. But when we spent the days meandering about the town, we didn’t see that many. Even when we took a motorbike to explore some sights on the outskirts of town, there weren’t many Westerners. 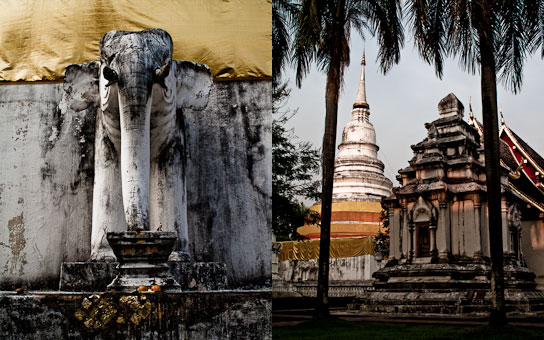 A couple weeks later I overheard some tourists talking about how they hadn’t seen much of Chiang Mai because they got too drunk at night and slept most of the day. The response of laughter and high-fives suggest a shared experience and gave us an explanation to where they all were. I thought it unfortunate people travel so far to experience what they can at home, but hey, it just means the streets are less crowded for us. 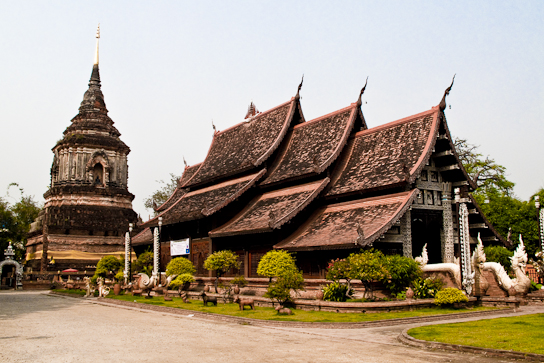 One of the wats had an “monk chat” area, manned with a few monks sitting around waiting for people to come up and ask questions. As funny as I found this, I had one question that I kept forgetting to ask while talking with other monks – there is quite a large age range of monks, and I was curious why that was. The short answer is it depends on the kid’s family or village. Some villages or families send the kids off at an earlier age, others wait for the kid to decide. 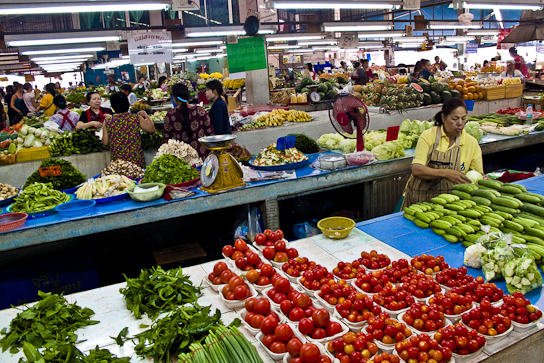 Shopping for our cooking class.

At night there were a few markets that made for a good evening activity. They also made for good eating – we’d usually eat our way along the street more than shop. One market, the Chiang Mai Night Bazaar, lined the streets for a few blocks, and took up a couple buildings as well. It had a concert stage, food court and everything for sale you could think of. It was so sprawling that I lost where I’d parked the motorbike and spent more time looking for it then I did browsing the market.

Our last day was spent in a cooking class where we each learned five dishes. Tina and I chose different dishes so we actually learned ten dishes total – like spring rolls, chicken and chili and basil, green curry, etc. We both love to cook, so it was nice to get back into the “kitchen”, and it was great to make some good food, but the best part of the class was Meow, our instructor. 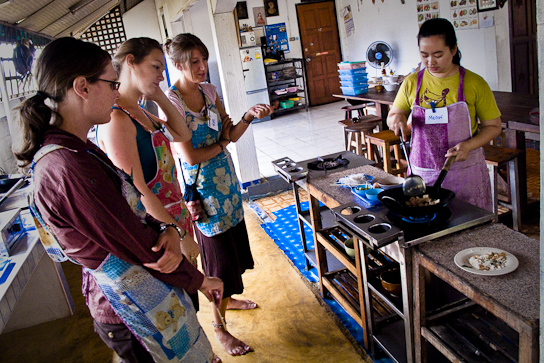 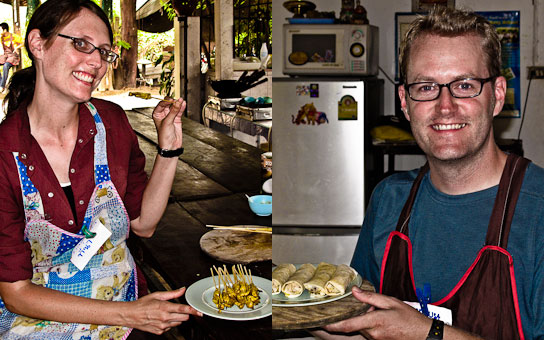 She made satay, he made spring rolls.

Charming and just as spicy as the food she prepared, Meow made learning fun by making jokes, mostly salacious, throughout the day. When a young man came in and kissed her cheek, she turned to us and said, “He is my boyfriend. Now you wait outside”. He seemed funny, too. When I asked Meow who was funnier, she said he was – but when he came home late at night and tried to smooth it over by being funny, she was never amused.

The food was pretty tasty but not what I’d call gourmet. Because of the speed at which we made the meals, and the basic ingredients in each dish, I would say it was more like street vendor quality. Which in Thailand, is better then most Thai restaurants back home so we ain’t complaining. But a couple times we have had a standard dish – like chicken satay – that was the best we have ever had. Hopefully when we get home we can now figure out how to make it better. And then have all our friends over to eat it. 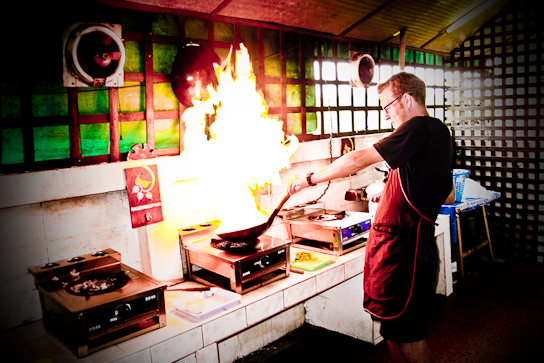 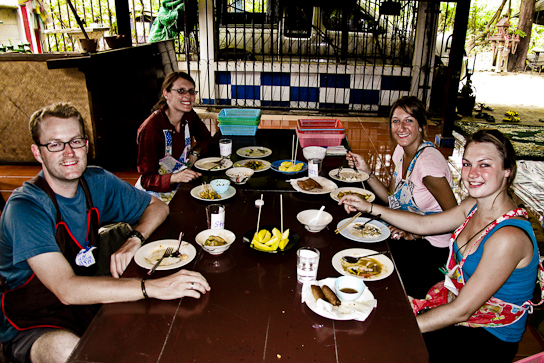 The class after eating all our food.