Along the Mekong, Laos – We had yet to do a long trip down the Mekong, and taking the two-day trip from Luang Prabang to Thailand would be our last chance. The trip starts early in the morning, and gets to Pak Beng – a village who’s sole purpose seems to be proving eats and accommodation for passengers on the boat – late after noon. Then the next evening you get to the border towns of Huay Xai on the Laos side and Chiang Khong. Because you get there at night, you have to wait until the next morning to cross over to Thailand. 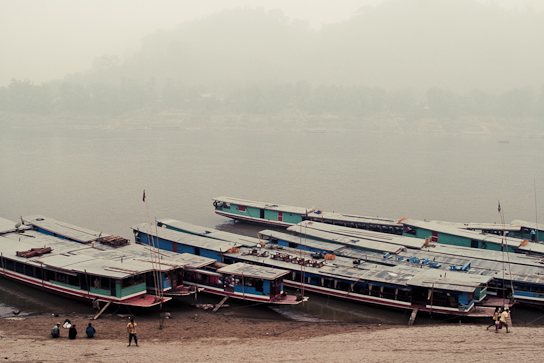 As one might imagine, there wasn’t much to do along the way – you just sit on a boat. For two days. And these weren’t fancy passengers boats – they were single level, open air jobs with either wooden benches or seats that looked like they were ripped out of a van. There was a “bar” in the back that sold snacks, coffee and noodle soup. That was pretty much it for the boats.

You could take a fast boat which takes six hours to the border, but you miss out on the whole reason for the trip. Taking it slow is the point. Plus taking it slow is so Laos. Along with making a terrible noise, these fast boats have a notorious record for crashing – there isn’t time to maneuver around rocks or floating debris – especially in the dry season when the water is low. 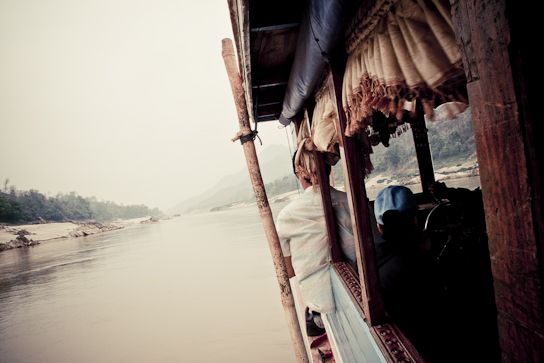 Heading down the Mekong.

Taking the boat is similar to taking the train – you see things you just don’t see from the highway. Little villages, farms on the riverbanks, kids riding water buffaloes down for their nightly bath, fishermen casting nets from atop boulders surrounded by rapids, even elephants. And the farther we got from Luang Prabang, the haze started to clear, washing way the constant stain from everything in site.

Occasionally we would pull over at a small village and pick someone up, or drop someone off, or drop off some parcels of who knows what. Once guy even brought his motorbike. 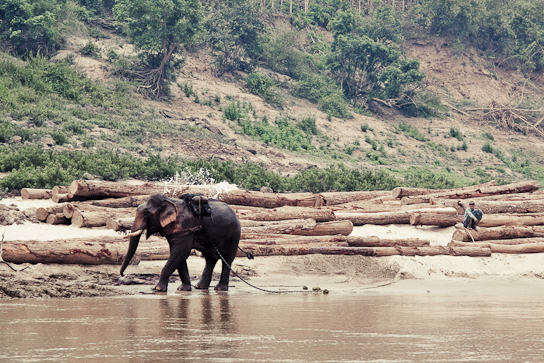 Because of the time and what we saw along the way, I would say the trip was epic. But it’s hard to call anything ‘epic’ when you just sit around all day. Maybe grand is a better word? Either way, there is something special about traveling this way. Even though the boat is filled with mostly westerners and their backpacks, it still feels like you are experiencing something authentic. And that seems harder and harder to do these days, as the steady stream of fast boats loudly reminded us.

Once in  Huay Xai we hunted for too long trying to find a cheap hotel. We found one in the center of town, checked in and ate dinner across the street at a restaurant run buy a crotchety woman who was a riot. She kept track of all the hotels and who was saying in them. So when we showed up, she knew where we were staying and how much we were paying. Too bad she was better at being funny then cooking food. 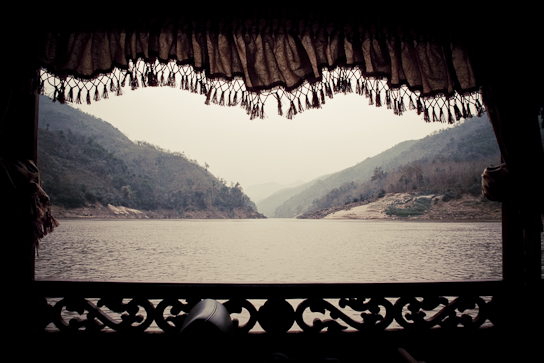 View from our seats.

When Tina and I got back to the hotel room, we realized there was no sink in the bathroom. I went downstairs and met the son of the owners. He was dressed in a tank-top and basketball shorts. When I asked him about the sink, he laughed and said the previous night some guy was really dunk and he fell and knocked the sink out the wall. While telling me this story, the kid dropped the f-bomb about every other word and kept pulling the front of his shirt out.

We got to talking and when he learned I was from SF, he got excited and said he loved West Coat rap. He was an aspiring rapper – Eminem’s role in 8 Mile had inspired him. He then busted into a freestyle rap about me and what I was wearing (particularly my glasses and sneakers) and being from SF. His rap name was “MC Loko” – one of his uncles was Mexican and had given him that has a nickname when he was younger. He also had a secret name that he recorded under when doing songs with bad words. 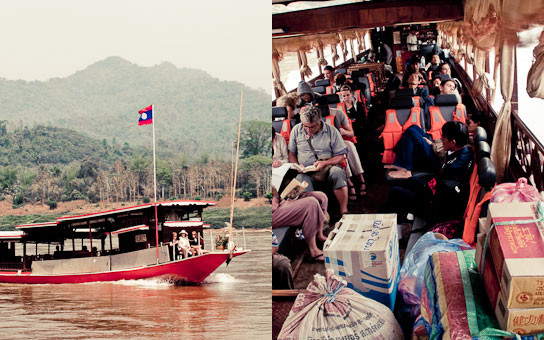 A ferry heading back to Luang Prabang; Lots of tourists and packages.

The song he was most proud of was called “F&@k the Police” – which I think is a standard in every rappers repertoire. He played it for me – with headphones – and was all smiles when I said I liked it. I’m no DJ MC, but the kid was alright – he had won the national Laos rap competition the past few years straight so he couldn’t be that bad.

It was fascinating how gangster rap had made it to a sleepy town on the border of Laos and Thailand (which, according to Loko, was filled with sissy boy bands) and we had seen no signs of it anywhere else in the country. And how earnestly he emulated what rappers in the States rapped about, things he never experienced himself. He rapped about what they rapped about simply because they rapped about it. I’m pretty sure I didn’t see any police my entire time in Laos.